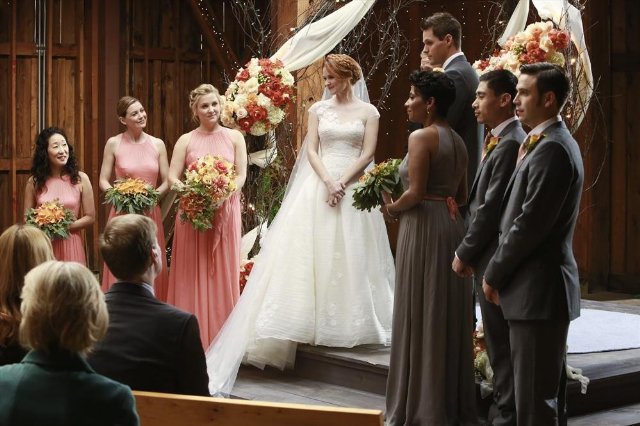 Mid-season finale time is probably the best time for television; the show ends explosively, but the viewers need not wait four long, agonizing months to find out what happened. We only need to wait one or two long, agonizing months! Grey’s Anatomy is known for being great at finales. Remember when Mer stuck her hand in a body cavity to hold onto a bomb? Those episodes were literally explosive! This season’s “Get Up, Stand Up” however, was not on bomb-in-a-body-cavity par. But at least we got some resolution.

Meredith and Christina spent most of the episode fighting and I spent most of the episode cringing every time they were close to making up and then didn’t. After throwing words around during their dress fitting they finally resolve to compete with each other to make themselves better, not to destroy their friendship. And we all cheer Hallelujah, because if one long fight was the way Grey’s got rid of Christina, I would have to stop watching. And the last show I stopped watching before it was over was Gossip Girl. Word to Grey’s: You do not want to be Gossip Girl. Gossip Girl didn’t even want to be Gossip Girl.

Derek spent the episode looking adorable while holding baby Bailey, and getting wooed by a group of the president’s brain mapping doctors that came bearing a large cheque and a job offer. But Derek’s being a good husband, and laying off the extra work that would require so that Meredith can be the super smart doctor lady she is. The president’s doctors aren’t having any of the McDreamy rejection so they enlist none other than POTUS himself to sway him. Derek gets the phone call during the wedding, and even though it was totally rude to answer it, good thing he did, or he wouldn’t have a new dilemma to drive his story forward for the latter half of the season.

Shane was just Shane the whole episode. I wish I could leave it at that because the more I write about him the more I want to punch my computer and I can’t afford that, but his story line was actually pretty important. After Christina tells him to go home because he needs rest, he shows her that he’s only worked sixty hours this week. He later shows Leah how to set back the time on her hours for the week so they can work more. Since they are two of only three named doctors left in the hospital, Shane convinces Leah that they need to preform emergency surgery on everyone in television’s dad, James Remar. Shane is over worked and over tired, leading him to believe that Jimmy is actually Heather, and it’s his fault she’s on the table. He angrily botches the surgery, until Leah finds the third named doctor, Webber, and he calms Shane down until he leaves the OR and he can fix his mistakes. As much as any Shane airtime sucks, I just know the first episode back has to have an angry Alex knocking Shane out for almost killing his father whom he barely forgave, and secretly loves. At the very least, he’s got to be on some sort of probation, and that means less Shane, so good news all around!

The episode was one long set-up for April and Matthew’s wedding. Most everyone was in attendance, including her scornful ginger sisters, and most importantly, Jackson. As the priest (presumably, they are both Catholic, right?) is talking he gets interrupted by Jackson who apologizes to Stephanie for what he’s about to do. Then he sits down. Now this episode would have been great if Jackson had stayed down, because that would be unpredictable. Him not saying anything to derail the nuptials would have been surprising. But alas, he stands up again and confesses his love to April while a shocked Matthew and a hilariously unimpressed Alex look on. April too, is stunned, and then it fades to predictable black. While this was the cliff-hanger ending, it was so expected I almost wanted to throw myself off a cliff, but that would mean googling cliffs and since I live in the city, you know they’d be too far too walk. I’ve never been a Jackson-April “shipper” as they say, so I was really hoping Grey’s had something a little more unpredictable up its sleeve. Say along the lines of Matthew walking out instead. Here’s to holding out hope for the season finale.