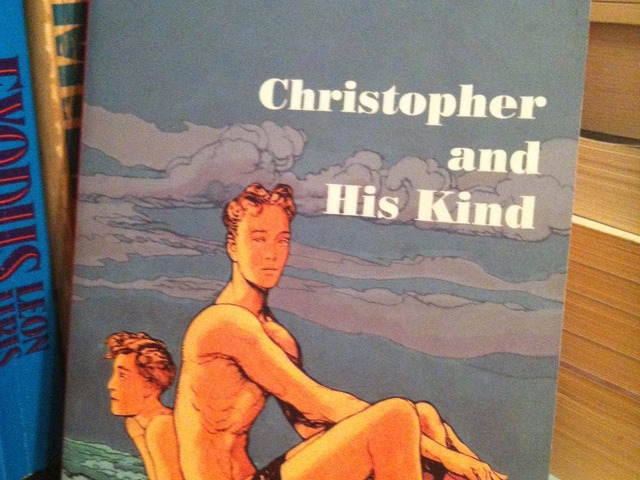 Isherwood and His Kind

First of all, for those of you not in the know, Christopher and His Kind was a book written in 1976 by Christopher Isherwood.  Isherwood wrote a number of books, including A Single Man,  Mr. Norris Changes Trains, but his most famous one was Goodbye to Berlin. This became, after several adaptations, the play and then film “I Am A Camera” and then the musical “Cabaret” which was adapted (again) into the more famous film of the same name starring Liza Minnelli.

Christopher and His Kind is Isherwood’s real life autobiography of his years in Berlin where he explored his homosexuality during the rise of Nazism from 1929 – 1933. The book explores his travels around Europe after 1933 when he left Germany up until 1939 when he left for the United States, but the bulk of his experiences in the book are during those first four years in Berlin. As such, they are as much a young man’s sexual bildungsroman (Isherwood was twenty-four when he arrived in Berlin in 1929) as it is an outsider’s vantage point of one of the most infamous periods of the 20th century.

It is perhaps surprising now to realize that Berlin in the 1920’s had become more advanced and liberal than any western city of its day, and that its decadence was perhaps second only to Nero’s Rome. Not even Paris came close to the sexual liberation of Weimar Berlin. For a young man eager to escape his repressive English prep-school upbringing, the chance to explore his sexuality in a city that was a hothouse of erotic possibility and promise was irresistible. To drive home the fact of Berlin’s permissiveness,  Isherwood describes in fascinating detail, his first residence in Berlin. This was a small apartment in what was called the Institut fuer Sexual-Wissenschaft – Institute for Sexual Science, that is to say, an actual place devoted to the serious study of every facet of human sexuality. Inspite of its shaky beginnings, it eventually “became a visible guarantee of scientific respectability” which was, as Isherwood states, “a place of education for the public, its lawmakers, and the police.” It held a museum, a library filled with paraphernalia and literature devoted to the study of human sexuality. Everything from homosexuality, transvetitism, to treatises on the psychological roots of bondage and sadomasochism could be found there. This was not an aberration of history, for the times in which Weimar Berlin moved were, (even now) shockingly modern. The Weimar government actually managed to almost have male homosexuality between consenting adults legalized in 1929, (a full four years before the Nazis came to power) but then the stock market crashed, and the reactionary elements panicked, and reforms of any kind were immediately put on hold indefinitely by the Reichstag.

Some nearly sixty years later, Isherwood writes of himself in the third person in this tale, as if the older writer were viewing his younger self through the long lens of time, and seeing him as a distinctly separate person. This is a little odd for the first few pages until one realizes that this third person narrative actually does the story a great service in that it identifies the young Isherwood’s failings and peccadilloes in a very different and distinct light from the older man’s experience. The older Isherwood spares the younger Christopher no quarter and quite witheringly berates his youthful self for his  egotism and ignorance in not paying sufficiently close attention to the growing horror going on around him. What is interesting here is that as a published English writer with quite a few connections, he could very easily have interviewed the Nazi high command, even Hitler himself, but refrains from doing so out of an evident disinterest in the political situation, an omission he castigates himself over, years later. His attitude towards the Germans is curious; he does not censure them for propelling Hitler’s rise to power, but instead seems to view them rather dispassionately, as though they were an already doomed group in the path of a killing wave. With hindsight, this is disturbing, but it is probably a more honest view of how the situation was viewed at the time, since neither he, nor anyone else could possibly foresee (much less conceive of) the horror that was to come.  Isherwood disapproves of the Nazis (he himself allies himself with the Communists) but when he decides to leave, it is primarily out of  concern for the fate of his German lover that propels his decision to flee, as opposed to distaste for the political nightmare which surrounds him. Like everything else he decides to do then, this too was motivated primarily out of selfishness, as he later admits.

This memoir is a compelling story on several fronts; the first of course, is that Isherwood was one of the finest prose stylists of the 20th century, with a technique that was both simultaneously elegant and austere, direct and sympathetic. He says in the beginning of Goodbye to Berlin that he is “a camera with its shutter open, quite passive, recording, not thinking” and it is this depiction which best describes the tone of his narrative voice in Christopher and His Kind.

The second point is that without being at all salacious or sordid, Isherwood gives a thorough, touching and frequently hilarious account of what it was like being a horny young gay man in a city redolent  with louche decadence. His descriptions of his friends, Wystan Auden and Stephen Spender,  E.M. Forster, and the various characters he meets, (including Jean Ross, who became the inspiration for Sally Bowles) make the piece fairly crackle with vitality. We know, love and are irritated by these people through young Christopher’s eyes, and as the old man remembers them with forgiveness and love, we become only too acutely aware of how fleetingly fast the years have passed for these madcap, reckless adventurers hungry with ambition and frighteningly adrift in dangerously swift, changing times.

The final and perhaps, greatest feat of Isherwood’s memoir is that one is always aware of the burgeoning horror of Hitler’s rise to power, without being pounded by it with the relentless obviousness of hindsight. We become aware of the evil as Christopher (and indeed the world) must have become aware of it; not too seriously at first, but then with a slowly growing horror as we realize the insidious cancer of Nazism is enveloping and destroying the Germany where Christopher has not only fallen in love, but discovered his true self in the process. The Germany of Kant and Hegel, of Goethe and Schiller, of Liszt, of Klee and Kandinsky, of Thomas Mann, and of bohemian decadence and sexual freedom is doomed, only to be replaced by an inferno of the damned, led by a murderous psychopath.

To my modern day eyes, this gradual realization is the single greatest feat of the book, as it demonstrates quite clearly the necessity of remaining politically alert to those who would dismantle democracy, and how easily its destruction can occur in any kind of culture,  even one as sophisticated as Weimar Berlin. In this elegant, witty and ultimately chilling memoir, Isherwood not only brings the past to life for us in vivid detail, but he also provides us with haunting warning signs to help us prevent anything like it from ever happening again