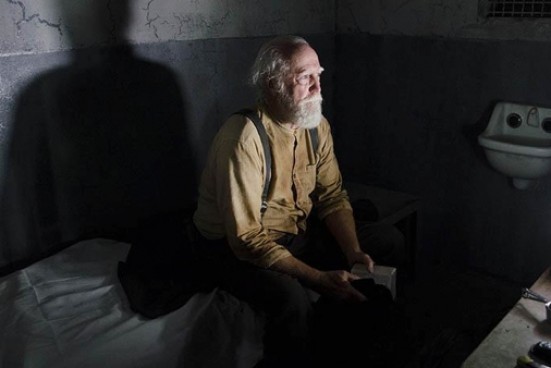 Four episodes into the new season, things are still looking very grim on The Walking Dead, even by the standards of a zombie apocalypse. The mysterious illness is still ravaging the prison with no signs of abating. Herschel is still alive in the quarantine building and trying to comfort the sick, including Dr. Caleb, the only prison resident with real expert medical knowledge. Rick and the others at the prison are still waiting for Daryl, Michonne, and their group to return with medicine from the vet depot, and as a result there is very little they can do. With all the supplies dwindling, Rick and Carol decide to make a run to a nearby suburban neighborhood to search for food, pairing the cop and recently confessed murderer together.

Rick, standing in for the audience, is being continually shocked by the new personality and harsh morality that Carol has been displaying. Her attitude is on full display as Carol has a final meeting with a sick Lizzie before leaving on the supply run. Rick finally understands what Carol has been teaching the children: not just how to survive, but how to rid themselves of emotions in order to do so. This sets her apart from Rick, who likes to put up a valiant emotional struggle whenever facing a tough decision. Things don’t get much better between Rick and Carol as they head out from the prison (IN A BRAND NEW HYUNDI ACCORD, AVAILABLE AT YOUR LOCAL DEALERSHIP) and she expresses no remorse over the deaths of Karen and David. Carol views it as necessary for the good of the community, and argues that they might have died anyway. But for Rick the possibility that they might have survived, no matter how slim, makes her actions unjustifiable.

When they reach the suburbs, Rick and Carol quickly run into two survivors, Sam and Leg Tattoo (she never actually gets a name) who are so naïve and inept it’s amazing that they lasted for so long. Rick is his usually cautious self, but seems willing to bring them back to the prison, and tells them to wait until they head back. Carol, however, pipes up and tells them to help search for supplies. Being incredibly incompetent, Sam and Leg Tattoo are almost immediately set upon by zombies. Rick looks to Carol for any sign of remorse for her actions, but all he finds is indifference. Carol has become an example of Darwinism at its most ruthless, and Rick just can’t accept that. Life and death decisions are not supposed to be easy, and they have become far too easy for Carol. Rick, making a completely arbitrary decision, banishes her from the prison, and sends her away (IN ANOTHER BRAND NEW HYUNDI ACCORD, AVAILABLE AT YOUR LOCAL DEALERSHIP), and Carol heads off into the unknown. Until she shows up in next year’s spin off.

Character Spotlight: Bob Stookey
Bob is not a fan favorite, he’s not a long-standing survivor, he doesn’t play a huge role in the daily activities of the prison, but he is the character who best exemplifies the overall theme of this episode: letting go. More specifically, how hard it is to let go of certain obsessions, even when doing so would be an improvement to your life. Michonne has to let go of her fixation with finding the Governor and focus her energy on improving their new life at the prison. Tyreese has to deal with the rage built up inside of him after Karen’s murder, before it causes his own death due to his extremely reckless attitude. And Bob is struggling with his alcoholism, even as the world is overrun with the undead.

Bob is a character defined by guilt and self-hatred, which stems from his own past reliance on alcohol. When Daryl finds him in the woods and brings him to the prison, Bob was presented with a golden opportunity to reinvent himself, free of his past indiscretions. At first he embraces that opportunity, and quickly sets about to prove himself as a valuable contributor to the community by participating in supply runs. His demons, however, quickly resurface when he is presented with alcohol.  Even though he resisted his addictions, Bob’s actions still led to the death of Zach, and now he is struggling with the guilt. Bob survived on his own for a long time, not caring about anyone else, and now as part of the prison community he has been forced to think and feel for others in a way that has become essentially foreign to him after the zombie apocalypse.

Bob’s guilt and shame come to a head in this episode, and drive him back to the bottle, which will surely just make the whole situation even worse. After the group has successfully found the medicine for the prison, Bob puts all their lives at risk, and endangers the mission itself, for alcohol. To make matters worse he even threatens to pull a gun on People’s Champion Daryl Dixon, proving just how contorted his motivations have become. As much as this episode is about other characters metaphorically letting go of their emotional damages, it’s Bob’s refusal to literally let go of the bag of booze which endangers others the most.