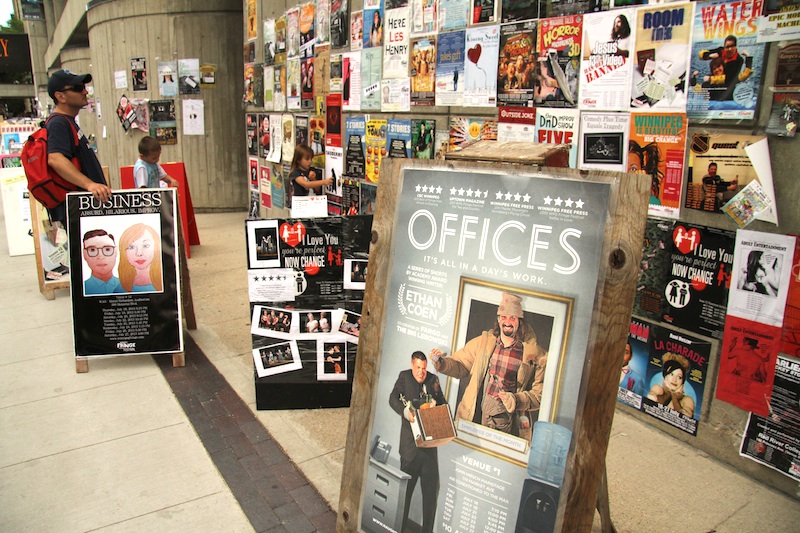 Okay, everybody, I have something to say and to be honest, I am a little nervous about it.

I am a member of the independent theatre community in Toronto and I am very proud to say so. I have been living in the city for almost four years and, in that time, have met some of the kindest, most creative, and most wonderful people whose work I respect and occasionally have been lucky enough to collaborate with. I have seen theatre that has changed my perspective on life and inspired me to continue in this strange industry. However, there seems to be a bit of a gap that I would like to address.

You see, something has been preying on my mind in recent months. It started to come up as I began conceptualizing my first producing project and therefore closely watching friends’ and friends-of- friends’ producing efforts. First, I noticed it creeping into the independent productions I saw in the spring. I was able to brush it off at the time, but then the Toronto Fringe rolled around in July, and I started to get a strange feeling in my stomach every time I went to the Beer Tent. Finally, in August, I went to perform in the Edmonton Fringe and I was able to see the situation from the inside and the outside at the same time. Everything clicked into place for me.

The question I was wrestling with as a new producer was “How do I make sure we sell tickets to this show?” (and also “How do I not go bankrupt producing this show?” and “Why am I so poor?” and “Dear God, what if no one comes and I am a huge failure and have to become a flight attendant to forget my shame?”). Time after time, I was seeing wonderful shows with teeny tiny houses. What were these folks doing wrong? They had chosen or written a great script, assembled a great cast and creative team, rented an appropriate venue, advertised the show…and it really was not paying off. What was causing this gap between a great show and a full house?

I don’t pretend to have all the answers, but I do have two ideas about what we all can do to help ourselves succeed as a community.

1) Let’s get some people who are not theatre artists in to those seats. Obvious, right? Wrong. Here is some anecdotal evidence: a few days before I left for Edmonton, I went on a date with a young man in the Annex. When I told him why I was leaving in a few days, he asked me what a Fringe was. Now, to be clear, from where we were sitting, we could see Honest Ed’s and he lived in this neighbourhood. He was a former artist turned app designer and was generally into the cultural scene in Toronto. He had never even heard of a Fringe Festival. After my explanation, his response was “That sounds really cool. Does Toronto have one?” I explained that we did, and that it had happened in that very neighbourhood in July. Later in the conversation, he referenced a “street party” that had happened by Honest Ed’s earlier in the summer. When I connected the dots for him and told him that that was the Fringe, he looked at me like I had just sprouted a second head. To be clear though, he had never gone in. He had just seen the lights and a lot of people crammed in an alleyway.

Aside from this guy not being the sharpest tool in the shed, it seems to me that there is a disconnect between independent artists and their audience. How do we reach out to people outside of our community? They would come to the theatre, I think, if they knew that it existed. More anecdotal evidence: people in Edmonton book their vacation time so they can go to the Fringe. My brain exploded when I overheard these conversations as I wandered around the Fringe grounds between shows. There were several beer tents absolutely packed, not with Fringe artists, but with people attending shows. The artists had to go somewhere else and it was wonderful.

I truly do not run with the Theatre is Dead crowd, but it’s important that we acknowledge that theatre’s position in society has definitely changed. We are now competing against Netflix for people’s attention. It’s time we upped the ante, stopped just making Facebook events and hoping for the best. Let’s get press. Let’s create content. It doesn’t have to be expensive, but damnit, it does need to be effective and let’s be honest with ourselves here – overall, I think we (I am totally including myself in this) are not being as effective as we could be, which leads me to my second point.

1) Let’s make it easy to support each others’ shows. So you’ve decided to produce a show. You’ve got a great script, a great team, and hell, you even listened to point one and made a video. You posted it in your Facebook Group. Great. Let’s all share the crap out of it. Got a friend in a show? Plug it. Your friend is producing another show at the same time as you? Plug it. Of course, as much as we would all like to see everyone’s shows all the time, it’s just not possible. But there are other ways to support each other. Many independent companies are already doing this because not only is it effective, but doesn’t it make us feel a little less alone in this? It’s scary, doing what we do. It feels nice to know that someone else out there is saying “Yes, this work is worth seeing, so go see it.”. But I do think we could make it more of a priority.

It’s the little things, my friends. Every Retweet and Share gets us all a little bit further ahead than we were before. Every post-show thank-you-and-go-see-this-other-cool-show speech might sell another ticket. Every postcard stuffer…well, not every one. We need to limit that, they are pouring out of the program sometimes. And, please, include an Artsworker price in your ticket pricing structure. I don’t care if it’s $1 less than the regular ticket price. The Artsworker price says to me that you understand money is tight for us artists and that you value my presence at your show because you have made it $1 easier for me to attend. It acknowledges the community from whence you came. If your budget is tight and an Artsworker price isn’t in the budget, think about doing Artsworker rush tickets. Any empty seats you have 5 minutes before showtime, you’ll sell to Artsworkers for $5. Or something. Anything. Let’s fill those seats and our coffers at the same time.

This article isn’t meant to be a chastisement. It’s as much a pep talk to myself as it is a rallying cry for us all. I was inspired by so many artists this year, especially those Fringers in Edmonton who made a piece of theatre and took it on the road to share with audiences across the country. I learned so much from them and it gave me the chance to look at my beloved Toronto in a new way. We live in a great city with so much to offer and it is easy for our work to get lost in the theatre listings of NOW magazine. We have so many festivals and events here that I can quite honestly say many things simply pass under my radar because who has the energy to keep up with it all? But the lifeblood of our work is our audience and we owe it to those people who want to see it to make sure they get the chance to. Let’s give ’em something to talk about.