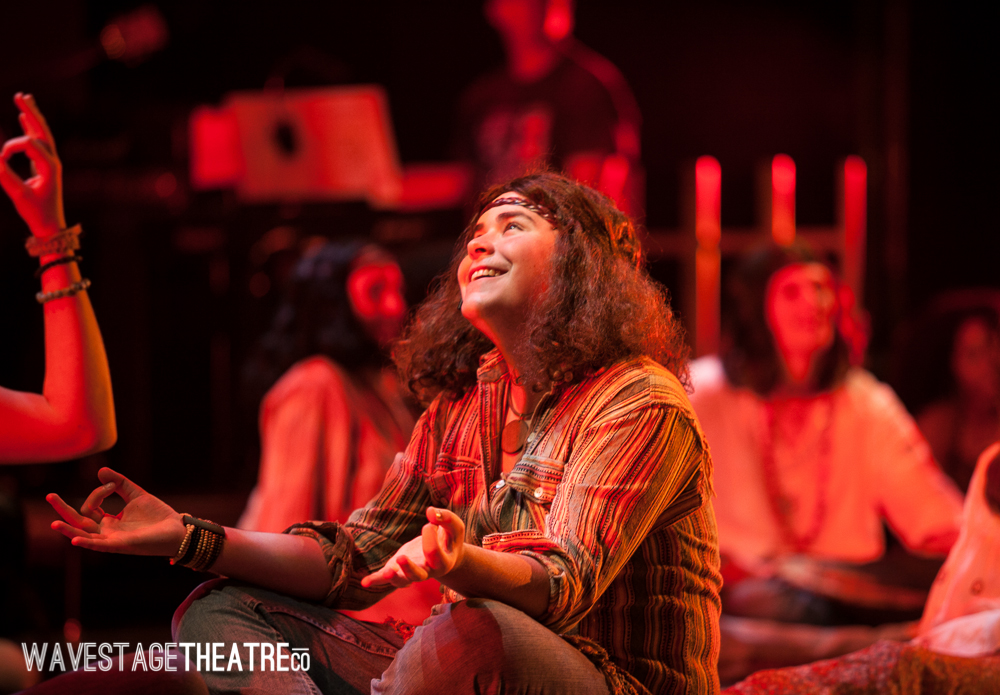 Okay, I’m going to try really really hard to make it through this review without making it about my hatred of Hair. I don’t understand why people still perform such a senseless outdated text and yet I find myself roped into seeing production after production of the hippie musical. What has come, at least, of all these senseless outdated productions is that I know what a good Hair looks like. That’s helpful. At least I can highlight some performers who deserve to be in better shows (there are always a couple), though I also have to point out what the company did that actually made Hair worse, if that’s possible.

This particular production was an intriguing one in that some of the things that were “wrong” about it actually made it more interesting. For example, a way-too-young Claude (Colin Campbell, I’m guessing he’s maybe 15 despite his well-developed tenor) seemed totally weird but actually gave the character a bit more license to be believably naïve while also making his fate even more tragic. An incredibly strong Jeanie (Kearyn Vos, lending her character a rich inner life) and a weaker Sheila created a fascinating dynamic in an otherwise fairly simple love quadrangle.  A slightly awkward ensemble made everyone seem more like lost kids than honestly carefree believers in free love and other things that are uncomfortable for young performers to act out (the tentativeness gave the tribe a posturing feeling that added beautifully to the sense of waste in a more tragic reading of the text). There were even some interesting racial implications in the fact that the most engaging character on stage, by quite a large margin, was Hud (a mischievous ball of energy with a thrilling voice in the form of Mateo McKay) and the least likeable was Berger (Joe Adams, so goofy he could have been in a show designed to keep elementary school students off drugs). When you factor Jake Runeckles’ standout Woof into the mix, it’s almost as if there was something in the text keeping the black characters in supporting roles (which, of course, there isn’t. It’s just interesting to contemplate when Hud seems like a pro and the two leading men both scream community theatre).

The overall caliber of Wavestage’s somewhat pedestrian Hair was fairly low. The choreography was pretty silly, the voices generally weak (Campbell, Vos, McKay and Rhiannon Kyle’s lovely Chrissy excepted) but at least some of the production’s issues led, if you think about them analytically enough, to some interesting conclusions.