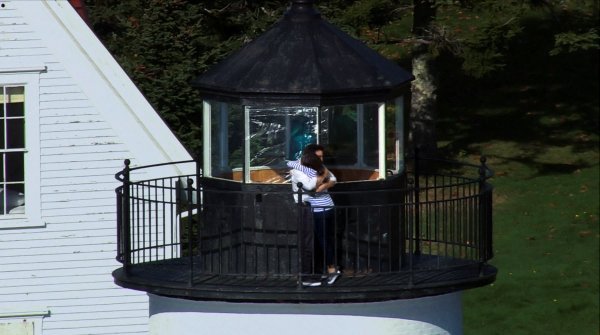 How I Met Your Mother 908 “The Lighthouse”

It’s all about moms on the latest episode of How I Met Your Mother. There’s Barney’s mom, Robin’s mom, Ted’s mom, and most importantly, the titular Mother (whose name is still a mystery). But even though we’re still in the dark about her name, “The Lighthouse” answers some other furtive questions.

Robin’s Mom
Robin’s mother is seldom, if ever mentioned on the show. It has always been about her son-wanting father. Funnily enough, the show addresses the lack of matriarch by saying that not even the gang knows much about her, beyond that she’s “terrified of flying” and “got stung by a jellyfish.” The former comes into play later when Robin’s mother fails to show up to her daughter’s wedding and prove her superior scrambled egg making skills. Apparently she was too afraid to get on the flight. She’s still got 33 hours until the wedding, so for Robin’s sake, I hope we meet the mother soon.

Barney’s Mom
The feud between Robin and Loretta finally comes to a head when Robin walks into breakfast wearing and then spilling all over Loretta’s blouse. Robin claims her mother is the best scrambled egg maker, only to have Barney rebuttal that Loretta’s eggs are so famous, bands like “Zed Zed Top” write songs about them. Since Robin’s mother never shows up, she has to prove she’s better than Loretta, but fails quickly when she can’t find the “egg opener.” Here, we finally get confirmation that Barney knows about Robin’s infertility issues. To him, marrying her is more important that marrying an opportunity to have kids. But who knows, maybe through the power of television magic, we’ll have a pregnancy announcement by season’s end.

Ted’s Mom
During a storm that future Ted claims happened, Marshall and Daphne have to take a detour to Virginia and Clint’s house. I can only imagine the significance of the pit stop was to drag out the time that Jason Segal needed to be away from the gang. Or perhaps, Clint’s role as the most annoying travel companion was meant to serve as a plot device to get Marshall to realise he can’t always give in to other people’s demands. Sometimes, you just have to do what’s right for you.

Lily’s a mom
Since finding out the news about Marshall’s judgeship last week, Lily starting early morning drinking. Even the slightest mention of a word related to lawyers would have her tiny hand breaking what must be the cheapest hotel glasses. The sight gag brought back the handy Linus, and probably the best lines of the night:

The Mother
Finally, the Mother is back in all her charming glory. Oh, how I’ve missed her the past couple of weeks. While it was only in flash-forward time, it was nice to see her and Ted so in love. I would have preferred to be able to fall in love with her right along side Ted, because damn is Cristin Milotti ever appealing, but I’ll settle for a pivotal moment in the couple’s relationship. Ted proposed! It wasn’t the cutest or most elaborate proposal (see Barney’s to Robin) but it was still a fantastic moment. I’m just glad we got to see the Mother again, even if for a short time. I don’t know why television is depriving me of my favourite characters, but damn if I’m not elated when they’re back.