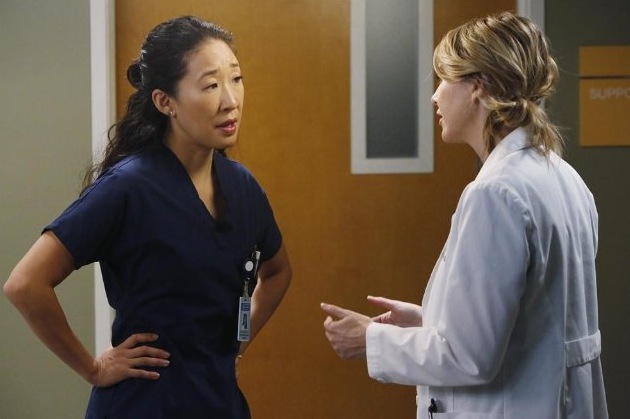 Grey’s Anatomy “Somebody That I Used to Know”

I have always been a staunch defender of the bitchy, take no prisoners lifestyle that Dr. Christina Yang lives by, but her attitude as of late has left me less than impressed with my favourite Grey’s gal. I understand where the dissolution of a friendship like the twisted sisters is coming from a business standpoint (Sandra Oh is leaving the show at the end of the season), but I’ll never understand it from a creative standpoint. I don’t believe you can take two characters so in sync with each other and rip them apart in order to have an understandable exit, one that doesn’t involve Shonda Rhimes’ classic dramatic death departure. I mean Meredith is the yin to Christina’s yang! I will not excuse that pun, because you don’t spend ten years, or however long its been in Grey’s years, building a relationship only to let it fall apart over ego. Both doctors think they are better than the other one, but I’d like to point out that they both spent the first three seasons hooking up in on call rooms with attendings. And while Alex Karev has dated everyone and their sister, I’d argue he’s still the best doctor because he’s never put his worth as a doctor over patients.

Also, Ross is the worst. At least Ross Gellar was a conflicted character that it was impossible to hate in the end, but Dr. Shane Ross has been an evil vindictive character all season. First he tells Mousy to go find Webber which leads to her untimely death, then he yells at McDreamy and says he doesn’t want to work with him (after spending all of season nine begging to work with him) and now he’s gone and yelled at Meredith for her drama with Christina. Silly, Ross, don’t you know it’s not your fight and would Owen really take Christina’s side anyway? During the yelling, Ross tells Meredith that, “if it was about the work, you would have gone to the Chief of Surgery but you know what he would have said.” I assume that means he thinks Dr. Hunt would take Christina’s side, but really, Ross and Christina are the ones breaking the schedule they made, to take the printer Meredith got the money for, and they are experimenting on a baby with a procedure that has never been tried before. Not only that, but the waiting for the 3D printer to work only wasted time so Karev had to jump in to help save the baby with Yang just moments before. It seems more realistic that Meredith wins this battle. Maybe I shouldn’t comment on the medical aspect of show…

In other “Somebody That I Used to Know” news, Callie and Arizona are back together, but Callie still isn’t over everything, so Arizona is on the couch. Murphy is crying in stairwells and ORs because she got dumped and now Callie knows about her relationship with Arizona and things don’t go well for anyone when Callie is mad. I don’t applaud the crying, but at least I understand it.

Bailey is getting kicked out of her OR because her OCD has gotten to be too much. She claims she’s fine, but anyone that knocks over a chair in anger only to pick it up and place is perfectly again a second later should probably take a visit to those other doctors in the hospital we rarely see.

April is sending invitations to her wedding, but not via email because that’s just gross. She’s also not expressly inviting Jackson cause Avery is at the top of the list and she can’t have Matthew constantly looking at his name. This led to a big discussion of “getting over” relationship and was paralleled by the dying women and her husband setting up her lover with another woman that she’ll find on Craigslist. Because this isn’t Grey’s Anatomy without and unrealistic storyline.