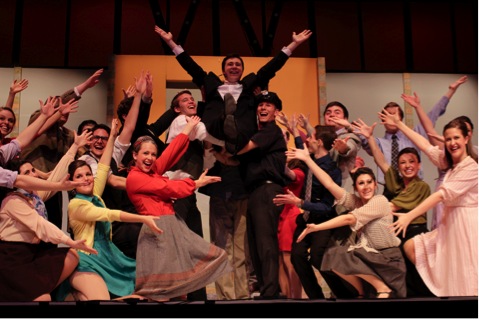 BU On Broadway teaches BU Audience How to Succeed

As America’s economy begins to slowly emerge from a painful recession, who isn’t in the mood for some lighthearted musical numbers about sailing into administrative success on waves of charisma, luck, and savvy fix-the-system know-how? Boston University on Broadway (BU on Broadway) provided some musical fun with their November production of How to Succeed in Business Without Really Trying, proving to us corporate faux-ductivity was just as prevalent in the 1960s as it is now.

How to Succeed tells the story of J. Pierrepont Finch (Joe Reed), a winsome window-washer who aspires to bigger and better things. His meteoric rise through the World Wide Wicket Company is observed, aided, and nearly sabotaged by sympathetic secretaries, bumbling bosses, and envious coworkers. Although the truth eventually comes out, all ends merrily; unlike the period television dramas so popular nowadays (I’m thinking principally of Mad Men), this musical is a fun romp through times where female hair was piled high, bowties were worn less-ironically, and mild workplace sexism and alcoholism cheerfully ran rampant.

This particular production could best be summed up by one of its songs, “Been a Long Day.” In this fun little number, which takes place at the end of the work day by the elevator doors, the streetwise secretary Smitty (Becky Ittner) witnesses Finch flubbing his chance to ask the enamored young Rosemary (Mary Miller) to dinner. She guesses at their infatuation and insecurities, and finally pushes a dinner special out of a newspaper towards them with more than a few hints and nudges. The show felt like a similar experience: when the main performers received not-a-little-bit of prodding from the superb supporting cast, moments of great fun and enjoyment were had by all. Without that poke, it often did not push beyond the expected. While I grant that I saw the performance opening night, where certain glitches such as microphone malfunctions can be more easily forgiven, I sincerely hope the energy and pacing of the moments of dialogue improved in the latter two performances.

I found the actors playing J. B. Biggley (Dylan Kaplan), the grumpy company president, and Hedy LaRue (Jana Keller), his, erm, close “lady-friend,” to be the most entertaining performances of the actors with speaking parts. What I didn’t expect was such a fantastic performance from the ensemble. The ensemble brought great energy and physical precision to every musical number they sang and danced in, often to the point of almost upstaging the lead performances. Considering college productions often neglect smaller roles in favor of those granted a bigger share of the limelight, I found this production to have thought carefully about the caliber of the performers supporting the man action of the play, and this group responded wonderfully. Complemented by a tidy set, lovely costumes, and a strong pit orchestra, BUOB’s How to Succeed was a fun night fueled with satire, gossip, and workplace caffeine.