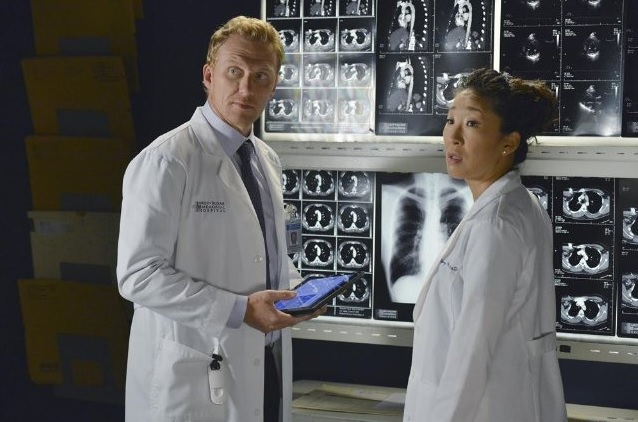 Last week, I wrote that Grey’s Anatomy was really straddling the line between primetime drama and daytime soap opera, and that description couldn’t be any more fitting than when the first victim of the day (a woman with a shattered baseball bat in her chest) tells Dr. Murphy she cheated on her husband with her brother-in-law. While obviously, this story line was a ploy to get Callie to think about her own marriage/infidelity issues, I can’t fathom why the responsibility was given to Dr. Murphy and not Dr. Torres. If the point was to give Dr. Murphy a story line, than by all means writers, you’ve succeeded in making her the most irritable intern on the show, a title that I’m sure Shane will usurp next week.

Intern hating aside, the episode was ripe with plot developments.

First, Derek and Meredith have ceased becoming functioning humans, and are now simply parents, at least, when they aren’t passing out in cars or bathroom floors. Alas, since no doctor at Sloan/Grey Memorial is allowed any sleep or life of their own, Meredith and Derek both find themselves at the hospital. Turns out, Mer took out her own staples, and the only pain she is in is due to sleep deprivation (although, you’d think that be a pretty good reason not to take out your own staples). She’s there to ensure Webber gets the proper treatment he needs, not the one he wants, or has convinced Bailey she should follow. After Shane all but forces the feeding tube up Webber’s nose, Meredith is greeted not with a “thank you for saving my life and calling me family” but with a “you should have let me die and I chose the wrong person to be my next of kin.” Although in support of Mer (which I am always) maybe if Richard really wanted to die when it was time, he should have casually mentioned she was his next of kin.

Christina and Owen finally (hopefully, finally) decided to see other people because Christina can’t step out of the elevator without wanting to hold his hand or comfort him when he stressed about board dilemmas. Since they’ll be seeing a lot of each other until they work out where money is going to be allocated in the hospital (and if Owen keeps tricking everyone into thinking there’s a trauma) they really need to have another person to be a distraction. Man, I do not envy the woman who dates Owen next only to inevitably get reamed out by Christina.

April passes her boards (did we even know she took the again?) and gets and awkward high-five when she actually wanted a hug from Jackson.

Intern Jo and Alex spend all episode wanting to have sex with each other but not actually asking each other if they should because Mousy just died and is that rude? Apparently not, since they seal the deal by the end of the episode since Jo is about to run out of sexy underwear.

In the end, Callie finally realises that instead of telling baseball bat lady’s husband about her extra marital affairs, she should have him think she loved him, because that’s all she wanted to hear from Arizona. She wishes Arizona she hadn’t ever told her about the affair with Lauren (even though she caught Lauren wearing her wife’s scrubs, so didn’t she really discover it on her own?) and tells Arizona that she doesn’t want to do couples therapy, but thinks she should go ahead alone. Assuming these two are end game, I hope Arizona did go into the therapy session to work out her issues with her leg so maybe Sophia can get her moms back, even if it does mean MerDer lose their third hand.