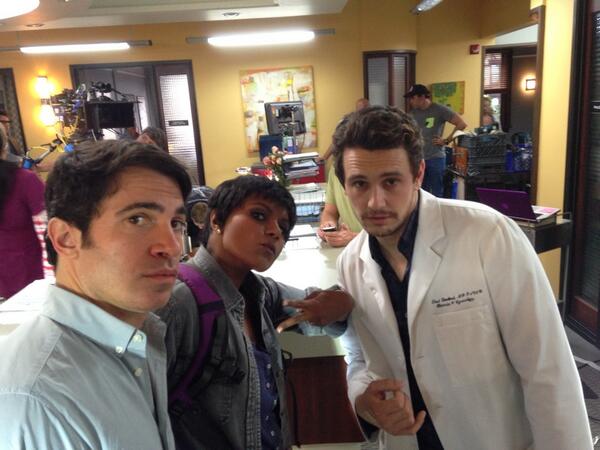 I’m not sure why I love The Mindy Project so much. It’s not the hang-out sitcom perfection of New Girl, the pulsating heart and comedic absurdity of Parks and Rec, nor the envelope pushing experimentation of Community. In fact, for most of the first season, The Mindy Project seriously struggled to define what exactly it was, adding characters, tones, and romantic complications like it was its job.

Yet somehow, across the lonely desolation of a new-tv-show-less summer, my affection for Mindy Kaling’s flawed effort has only grown, to the point where I felt palpable relief upon finally seeing the premier (posted a week early on Hulu, a move I don’t quite understand to be honest). It’s not just my affection for Mindy herself (or my incredibly narcissistic belief that I am her most of the time), I realized that I really missed the unique rhythms of the show.

Mindy Kaling loves both sitcoms and romantic comedies, two genres way-too-often maligned by people who chose to only see the worst of them, and this comes through in every episode. She is EXCITED to be playing in this field, to be taking romantic moments and putting a Mindy spin on them (although I could do with never hearing the expression “he peed on my wedding dress” again).

The pilot rushes around a lot. At the end of its first season, Mindy cut all her hair off to win back her do-gooder boyfriend (I know he must have a name, but I exclusively refer to him as Anders) and went off with him to Haiti. The premiere picks up with Mindy, only slightly changed by her stint as an underpaid doctor without border, extolling the virtues of her Haitian life and her relationship with Anders, until an untimely bout of “failure to maintain her non-vital organs” shepphards Mindy back to the waiting, creepy arms of Morgan and the rest of her New York colleagues.

If this all feels a little convenient (why would they send from Haiti to New York City?), it is. But that’s kind of the point. Mindy’s love for sitcoms allows her to bypass a lot of the reality other shows would pretend to have in order to get to the plot points she wants. The resolution of the Mindy-getting-married plot was similarly pat, allowing them to keep around Anders (fine, I looked him up. CASEY) when they want, while still allowing Mindy and Danny to make glowering, grumpy, but-sort-of-maybe-in-love eyes at each other. And I really can’t complain, because the best moments of The Mindy Project come when it allows Mindy to give in to her favorite obsessions, rather than adhere to normal rules of plotting.

If I was the type to give grades (and the piles of ungraded papers I STILL have from a stint as a teacher that ended TWO YEARS AGO certainly seem to say that I am not), I would give this premiere a very satisfied B+.

PS: I didn’t talk enough about my love for Chris Messina in this review, but during my periodic pop ins during the course of this season, I’m sure I’ll have ample opportunity to extoll his virtues. Because seriously… THIS was my favorite moment of the whole show.

PPS: I didn’t talk about James Franco either, even though I liked him. More on that next week!