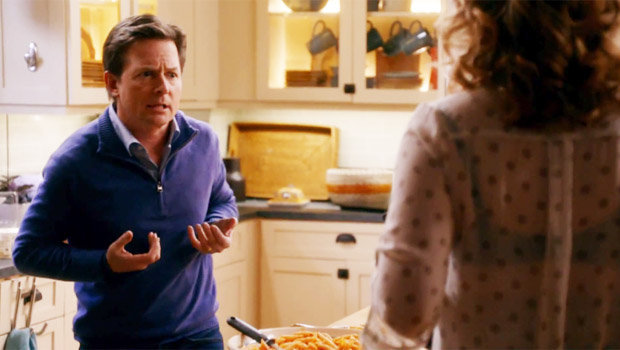 Remember a week ago when I claimed that comedy pilots were impossible to judge? It turns out the number one way to counteract that whole “we have to know characters before we can love them for their foibles” thing is to have it be Michael J. Fox in a thinly disguised autobiography.

The moment that best encapsulates the tone of The Michael J Fox Show comes in the middle of its pilot episode, in the guise of a cheesy video Fox’s daughter, Eve Henry, makes about her Dad “overcoming his obstacles.” There’s this fantastic black and white, slow-mo shot of Michael struggling to open a jar. It’s not mocking his problems, it’s mocking the absurdity of our taking this so seriously, of our using this as a cathartic moment of our own revelation. Eve gets an F on her assignment, and we get a laugh.

Of course, the show also IS about catharsis, about how hard living with a disability can be, but it sees that, honestly, most people have disabilities. Eve fails her class. Their son, Ian, leaves college and ends up living at home. Mike’s line producer only stops crying for long enough to puke. Matt Lauer’s bald. We’re not excited to have Michael J. Fox back on the small screen because “Thank god he overcame Parkinsons to be an ALMOST functioning actor,” but because Michael J Fox has more charisma and comic timing in one instant than most people do in whole episodes.

It doesn’t hurt that despite the name of the show, there really is more to this than just Michael J. Fox. The family surrounding him is also pretty good.  Ian and Eve have a great sibling bond and a nice hold over the show’s sincere yet irreverent tone. I’m looking forward to seeing Mike’s wife, Annie, get fleshed out, but Betsy Brandt and Fox have great chemistry, and she has an easy comedic presence. Wendell Pierce as Mike’s boss is predictably funny, as well, even though the work side of things cant really equal up to the home side of things at this point.

Maybe the real defining moment of the pilot comes at the end, as Eve’s sincere, just barely teary narration provides the episodes one moment of evert sentimentality, right before cutting back to Fox being unable to scoop mashed potatoes and his wife saying “I know you’re having a personal victory, but we’re all really hungry” before taking it away from him.

If there’s a problem with The Michael J. Fox Show, it’s that the niceness of the family and the character combined with the fact that the show is dedicated towards showing that Parkinsons doesn’t stand in “Mike Henry’s” way may lead to the show having a lack of legitimate stakes. But as long as it keeps being this funny and heartwarming, it’s a welcome addition to the pantheon of Thursday night NBC comedy.

I wrote the above before watching the second episode, because I think it’s only fair for a PILOT WATCH but figured that I would give my updated thoughts after the second.

If I had to define the tone of The Michael J Fox Show, I’d call it sweetly politically incorrect. Like Mike crushing on his upstairs neighbor despite never having any intention to cheat on his wife, it brushes up against being offensive but carries itself through on charm and good nature.

This week the problem faced by Mike in terms of his Parkinsons is that his meds make him talk in his sleep, making it impossible for him to keep his crush a secret.  Which leads to this fantastic line, “Just so you know, when you sleep, you don’t shake, and you don’t sound like a ghost.” That one might be better in context. Even more better in context could be his plaintive “What? Parkinsons” when he starts blatantly displaying said crush.

This storyline goes a little far for me, as Mike’s attempts to prove he doesn’t have a crush lead to him inviting his boss over for a double date and then getting increasingly offensive until his wife leaves him. Especially because Annie is about half a character now, which makes it harder to care when she’s hurt (and harder to understand just how hurt she may be)

This episode also features Eve trying to win over a lesbian so that she can fill in the “lesbian spot” in her social circle and being thwarted by Ian trying to make out with said lesbian.  This storyline was pretty funny (and I loved the random DDR break in the middle), but I think that for the time being the kids’ stories work better when they’re incorporated with Mike’s.

All in all, a solid second episode and definitely worthy of continued viewings.