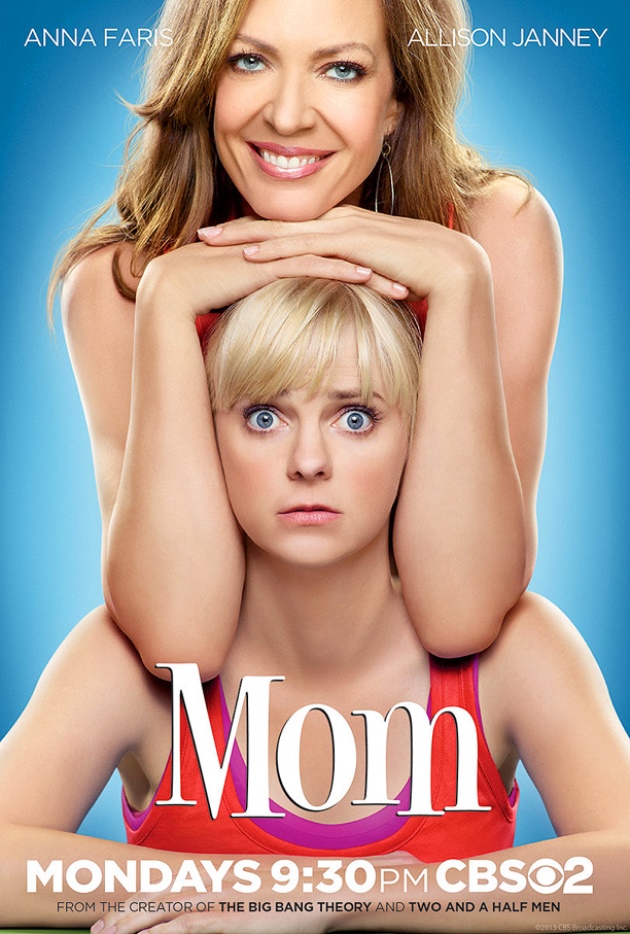 Reviewing comedy pilots is a notoriously difficult endeavour. Lots of comedy comes from the familiarity we have with people and their expected rhythms and it can be incredibly hard to jump into one episode of a comedy and immediately pick that up. For example, I pretty much hated the New Girl pilot, but when I rewatch it now I see all the absurdity and heart that eventually made it one of my favorite shows.

And even a great pilot isn’t necessarily indicative of a great show. I really liked the 2 Broke Girls pilot, but gave up on the show relatively quickly as I realized it didn’t have anything more to offer me.

So it is with a strained sense of logic that I say that the Mom pilot is pretty much… okay. It’s definitely a Chuck Lorre sitcom. There’s an undercurrent of something dark and angry. An omnipresent laugh track. Occasionally unnecessary sex jokes. But it also stars Anna Faris, who really hasn’t gotten the role to compliment her particular comedic rhythms, and who handles the darkness way better than most people. In fact, Faris injects the whole episode with some much needed reality and heart, adding depth to tossed off lines about snorting coke from a shag carpet.

Really, the overall success of this pilot (and I would say it’s a success, albeit a cautious one) is due to the real talent of the two actors at its core (Farris, as aforementioned, but also Allison Janney) and a surprising depth to the central conflict. If this review sounds overly cautious, call it a 2 Broke Girls hangover. That was another show that felt like a compelling mixture of darkness and humor, with characters’ with actual problems that they handled with a wry grin. Ultimately, though, that show felt flat to me when it became obvious that there problems were really just punch line generators.

Anyway, the show follows single mother Christy (Faris) – recently sober, completely over-worked and under paid as a waitress in a fancy French (?) restaurant, and trying to atone for years of crappy mothering to her two children. At an AA meeting, Christy runs into her estranged mother, Bonnie(Janney), and Bonnie works to try and force her way back into Christy’s life. From there, Christy heads home to her angry, sexually-active daughter and adorable son. We also touch on her relationship with her married boss (Nathan Corddry) and her son’s father.

Right now, Bonnie is a thinly sketched character, vacillating between charming and lascivious. But Janney is such a talented actress  that she makes you feel confident that this character has more than meets the eye. Plus Farris and Janney have such instant, deep chemistry that I felt confident they could anchor the insanity around this.

The stuff with Christy’s daughter doesn’t work quite as well – right now, the daughter is too much of an archetype to actually sell the lines where she hates on her mom (especially since every part of the pilot reinforces the idea that Christy is working her ass off to improve her kids’ lives). Plus, god I hope they don’t go the teen pregnancy route – between this and Welcome to the Family, I’ve had my fill of 17 year olds having quirky pregnancies on television.

The restaurant stuff works pretty well, and I particularly liked French Stewart’s turn as a surly, deadpan chef. The mixture between workplace comedy and family sitcom will definitely power this show moving forward, and here’s hoping they hit the right balance.

It’s a huge pain in the butt to watch CBS sitcoms (they’re the only network not easily available on Hulu Plus, and as one of the damn millenials who ditched cable in favor of online streaming, that’s my main source of television awesomeness), so I’m not certain if Mom will make it into my weekly watching. That being said, the promise of more Farris and Janney is very real, and I wouldn’t be surprise if I end up gravitating back to this show.