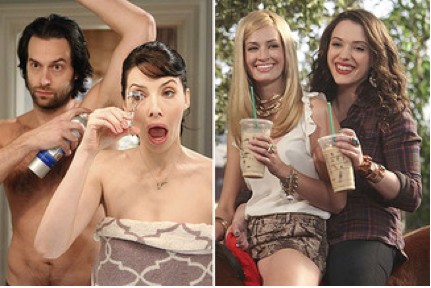 Whitney Cummings was not a name most of us knew before this TV season. Now, thanks to the annoying and ubiquitous ads for her eponymous new show Whitney, she feels like a familiar and annoying relative.

Still, Cummings is the driving force behind not one, but two new shows starring women and about women, and as such, as My TV’s resident feminist theory devotee, I can’t help but wish her some measure of success. So let’s look at her efforts.

First, Whitney. The pilot of this offering is pretty dismally typical sitcom fare. Whitney plays a late twenty-something, early thirty-something with a live in boyfriend and no plans to marry any time soon. She’s surrounded by the aforementioned boyfriend, a suspiciously Barney Stinson-like male friend, a PDA-obsessed couple, and (my personal favorite) an angry divorced woman who just wishes all the thirty-plus men in her life would stop whining about their feelings. There’s really nothing fresh or exciting here, although the dynamic between the friends is good and the dialogue was not as cringe inducing as the promos made it seem.

If I seem less than enthusiastic about the pilot for Whitney (which I’ll probably sample a few more times, given my aforementioned belief that comedy pilots tell us almost nothing about the show to come), I remain wholeheartedly committed to Whitney’s other pilot.

2 Broke Girls, although drenched in the live studio audience and traditionally sitcommy rhythms that seem to trap Whitney, is a fantastic breath of fresh air. I’ve complained before, and in painful detail, about the lack of compelling female friendships on television and in film. So imagine my happy surprise when the thrust of 2 Broke Girls isn’t on the broke as much as the girls. It stars the incomparable Kat Dennings as Max, a street smart, underachieving waitress who, in a fit of empathy, agrees to allow a fallen from grace rich girl (Beth Behrs, who I’d never really noticed in anything before, and who is fantastic here) move in with her. And that’s it really. The show is going to be about these two girls, being broke as anything and young twenty somethings, figuring out life and dreams and all that jazz. But the script, written by Cummings and Michael Patrick King (Sex and the City) is so sparkly, witty, and tonally perfect, that it makes you think it’s a whole lot more.

The pilot has some kinks to work out. The supporting characters range from the interestingly eccentric to the almost offensively caricatured (an African American gaining hepcat? An easily manipulated, hyperactive Asian?) but it’s hard to notice when Behrs and Dennings fall so easily into their perfectly realized characters. Behrs’ character could easily have suffered under the power of Denning’s Max, but instead Behrs and the script allow Caroline to be smart, kind, and yes a little bit less than practical. As funny as it is to watch her struggle to figure out things like the subway, they color Caroline with enough other details (her biting wit, her book smarts, her obvious immediate affection for and loyalty to Max) that you don’t worry she’s going to become an annoying caricature.

So far, 2 Broke Girls is the most promising pilot of this season (I haven’t seen Pan Am yet), and the show I’m most looking forward to enjoying as we move along.