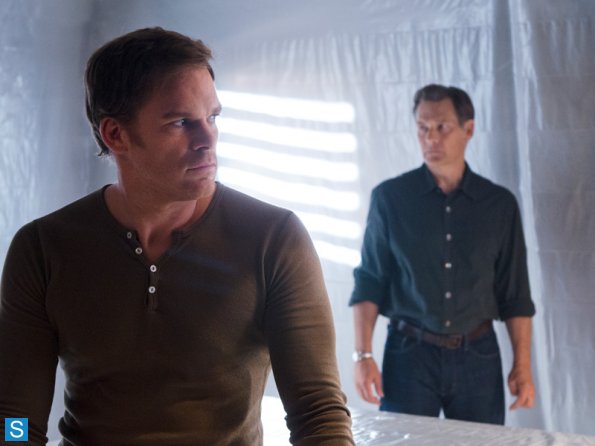 Dexter Morgan is dangerously close to leaving Miami. As personal fans, viewers are torn between seeing our hero slay the evil Oliver Saxon to protect Dr. Vogel and seeing him leave the madness, to start a real life with Hannah and his son, Harrison. The personal vendetta between Dexter and Oliver doesn’t seem as real as his love for Hannah, but the story must go on.

With only two episodes to go, we now know that Oliver is indeed The Brain Surgeon, according to his actions, his killer video, and the miraculous ending of “Goodbye Miami.” Despite Dr. Vogel and Oliver seeming to reconcile their differences, he made it clear that spending a few hours together would not change his basic ideals about life and about her being a mother.

Dexter’s motivation, however, does come in those final moments of the episode. If he had left with his near-family sooner, forgotten about the Vogels and moved on, there may have been a happy ending for everyone, allowing Oliver (a.k.a. Daniel Vogel) to take over as the new serial killer in Miami. That all changed when Dr. Vogel chose Dexter over her real son, which lead to her imminent death.

After watching Oliver kill Dr. Vogel with no regard, Dexter now has his motivation to put Oliver on his table. The real curiosity lies within Oliver’s next move. With his mother now gone, it’s difficult to tell what will keep him in Miami, unless it is merely to also kill Dexter. If so, the next question to ponder will be on whether Dexter is enough. With a lifelong jealousy like Oliver Saxon’s, Deb, Hannah and Harrison are also likely targets for the wannabe mama’s boy.

In addition to Oliver, U.S. Marshall Clayton also seems to be hot on the Morgan trail. Stumbling into the fact that Dexter is quitting his job to travel, he visits Deb on the beach to ask her a few questions, not knowing that Hannah is right inside, making lunch for Deb and Harrison. Later in the episode, Harrison is injured and Hannah must take him to the hospital for stitches, exposing her whereabouts to a nosey nurse. With Elway also on Hannah’s trail, it’s anyone’s guess what will happen next.

Between the siblings, Dexter admits that he wants to start a life with Hannah in Argentina. Angry and somewhat saddened, Deb replies, “I don’t know what my life looks like without you.” Dexter jokes, “Maybe it looks better.” While the two have always seemed to need each other—they certainly believe so—maybe this joke is right on the money. Deb has certainly changed since finding out about Dexter and her guilt/burden eats at her more each passing day. She may be better off alone, or possibly with Quinn, assuming he doesn’t find out about Dexter’s eradicator hobby.