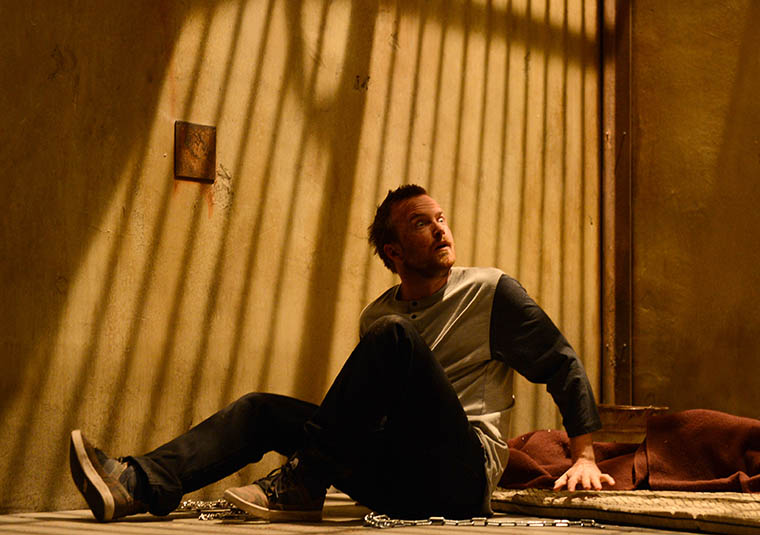 The penultimate Breaking Bad launches with Saul entering his own version of witness protection. Played by Robert Forster (Jackie Brown, Mulholland Drive), Ed sets up Saul with a new identity and then escorts him below his vacuum store cover business where Walter is also hiding out with his barrel of money and a tornado of emotions.

Moments later, police are escorting Marie to her home (it looks like she has just come from Hanks funeral) only to find the house has been broken into by criminals. Cut to Uncle Jeff and his gang watching Jesse’s tell-all video. Sniffing, Jesse discusses Todd’s murder at the train robbery. Todd seems happy to have his crew know just how uncaring he can be.

In their temporary hideaway, bunkmates Walter and Saul discuss current events. Walter asks for a list of mercenaries to kill off Jeff’s men, but Saul wants no part of it. When pushed, Walter begins to threaten Saul, but his illness quickly overpowers him and Saul exits, advising Walter to return home as the town’s John Dillinger, with the possibility of his family being able to keep some of the money.

Meanwhile, Skyler is among lawyers, where she admits, “I understand I am in terrible trouble, unless I give you Walt,” and then adds that she truly doesn’t know where he could be. Later, she discovers a masked Todd and two other goons standing at her baby’s crib. Todd’s message is simple: forget about Lydia, who is the only real connection between Walt and Todd. These men threaten her baby, but they also remind her about Lydia, so it’s difficult to tell what she will do next.

Lydia meets Todd in a coffee shop, where he is dressed for a Docker’s commercial, in an attempt to impress his crush. She makes him sit back-to-back at two opposing tables, similar to what she tried to pull with Mike last season. Lydia’s paranoia is once again on high and she appears to want Skyler dead, even when Todd admits that Skyler is just another mother, protecting her child. Preparing to leave and stay on the low down, she stops when Todd tells her the new batch is 92 percent pure, thanks to their captive, Jesse Pinkman.

Ed parks a propane truck outside of a seemingly abandoned cabin in New Hampshire as Walt climbs out of the hollow back. Referring to Walter as Mr. Lambert, Ed describes the simplicity of the hideout and tells Walt that he will be back in a month with supplies. We also learn that the nearest town is eight miles away and if Walt is discovered, Ed will not be returning.

With a paperclip, Jesse manages to unhook the cuffs from his legs and arms, but he is still trapped in the bottom of a cage. By rolling up his thin mattress and placing his toilet bucket on top of the roll, he is close enough to nearly reach the top. With a jump, he springs to the top and grabs the cage. In an impressive effort of strength, he eventually unhinges the bolt and escapes. While running through the junkyard, however, he is caught on camera and stopped at the fence. “Just kill me now and get it over with,” he screams. In one of the more brutal scenes, he is then taken to his ex-girlfriend’s house where Todd executes her in front of him and they remind him that Brock will be next if he doesn’t continue to cook and stay out of trouble.

A month passes and Ed returns with newspapers and supplies for Walt. Scrolling through the papers to find out information on the manhunt, Walt desperately needs a companion and eventually pays Ed to stay another hour. He finds out that Skyler is going by her maiden name and working as a taxi dispatcher and then Ed helps Walt with his medical procedure, where Walt asks Ed what he will do when he returns and Walt is dead from the illness—seemingly most concerned that his family will not receive any of the money.

In the final moments of the episode, Walt makes the eight-mile trek to town with a single box of money to mail to his family, despite Saul’s warning about Mike only getting caught when trying to send money to his granddaughter. Walt pays the bartender to call the school, posing as Aunt Marie, in order to talk to Flynn. While explaining how much he misses his family and how to send the money to Flynn, his son stops him and screams, “You killed uncle Hank! Why are you still alive? Just die already. Just die…” Realizing that he’s lost everything, Walter hangs up and then dials the DEA. When asked who is calling, he replies Walter White, puts a few more quarters in the phone so they can trace the call and walks over to the bar.

Ordering a last drink, Walter stops the bartender when he sees his former colleagues at Grey Matter on Charlie Rose. During the interview, he discovers that his former business is donating millions of dollars in an obvious attempt to cover up their affiliations with a meth dealer. During the interview, Rose brings up the cover up and his former partner tells the world that White only thought of the name of the company and had nothing to do with the actually progress made. Enraged, greed comes over Walter once more and he exits before the police arrive, not as Walter, but as Heisenberg, with nothing left to lose.