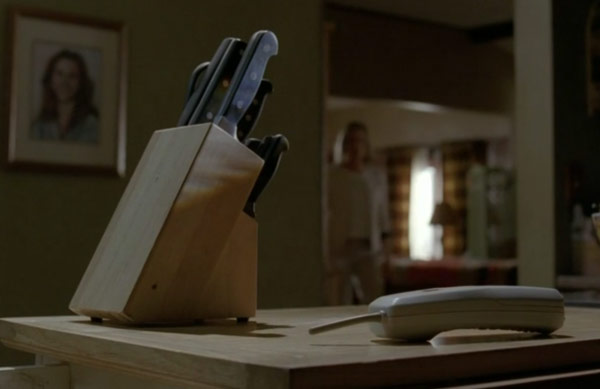 Designed to remind us of how far we’ve come, “Ozymandias” begins with a flashback. Before things got so complicated, Walter and Jesse cooked in a Winnebago in the middle of the desert. In his trademark whitey-tighties, Walter the teacher bores Jesse with his extensive knowledge of chemicals before calling Skylar with a planned story of why he will be late for dinner. A pregnant Skyler understands her husband’s overtime hours and mentions that she likes the name Holly for their developing child.

Walter, Jesse and the cooking station dissolve as gunshots foreshadow the scene that comes into play. Agent Gomez lies dead in the dirt. Hank, out of ammo, leans against the far side his SUV, bleeding from a shot to the leg. “These guys are D.E.A,” says one of Uncle Jeff’s goons while the leader rolls Hank over on his back. Walter, still handcuffed, pleads with the men to spare Hank and soon offers up his eighty million dollars, proving once again that he will do anything for family.

Jeff only lowers his gun when Walter admits that Hank is family. “You and your brother-in-law don’t seem to be getting along too good,” replies Jeff, who seems to be coming around to the idea of sparing Hank for the money. In this moment, there seems to be some level of understanding within Hank, who may see some of the former Walt in this man trying to save his life. Knowing men like Jeff, Hank turns to his brother-in-law and says, “You’re the smartest guy I ever met, but you’re too stupid to see he made up his mind 10 minutes ago.” With a shot, Hank is gone.

Walter hits the ground in shock. The killers find the money and Jeff makes them leave a single barrel for Walter, rather than taking all of the money. Despite Jeff’s band of Nazis and overall life choices, he seems to have some firm morals despite living within the criminal world. After loading up the money, the killers toss Hank and Agent Gomez’s bodies into the empty hole, which is rather symbolic since Walter dug the original hole, which is now Hank’s grave.

It would appear that Walter fell to the ground as Mr. White but stood as Heisenberg. He shakes Jeff’s hand in good faith, assuming to leave their disagreements on the battlefield. As the men are loading the money, Walter spots Jesse hiding under the car and tells Jeff that he wants him killed—based upon their prior arrangement. Todd, whose motives are still somewhat complicated, requests that Jesse be spared until they find out everything he told the police, even though there is much more to his actual intentions.

Before the men leave, Walter tells Jesse his chilling confession about Jesse’s girlfriend from season two:  “I watched Jane die. I was there. I watched her overdose and choke to death. I could have saved her but I didn’t.” With a bullet hole in his gas tank and no one else around, Walter pushes his last barrel of money through the desert in a very Coen-Brothers-like-scene of a situation turned sour. Coming upon an Indian preserve, Walter purchases a beat-up truck and rides off.

While Walter is trying to save what’s left of his family, his money, and his life. Marie visits A-1 and destroys it from the inside out. Believing that Hank is booking Walter at the police station, she forces Skyler to tell Flynn everything. Unable to believe the truth, Flynn is in shock as the mother and son drive home to find an unexpected vehicle in the driveway. Covered in dirt, Walter comes out and tells his family to quickly pack up so they can leave in a hurry with the ten million dollars.

Figuring out that Hank must be dead in order for Walter to be free, Skyler looks over at the kitchen table where the phone sits next to the cutlery rack. Instead of calling the police, Skyler picks up a knife and steps between Walter and their son. Telling him to leave, she ends up taking a swing and cutting the inside of Walt’s hand. After seeing blood, he grapples with his wife and the two end up on the floor. Flynn, making a subconscious decision, dives on his father and separates the two, protecting his mother. “What the hell is wrong with you? We’re a family!” screams Walt, as Flynn dials 9-1-1 and reports domestic abuse. In an instant, Walter leaves, picking up Holly on his way out. Skyler chases him and breaks down in the street as Walter leaves with her baby.

In a changing room, Walter changes Holly’s diaper with his duct-taped hand. Essentially, Holly is all Walter has left and she’s the only thing keeping him together. While trying to change her, however, the baby begins to call out for her mother, letting Walter know that he has lost everything. Moments later, he calls Skyler who has brought in the police and put out an amber alert on the missing child.

While Walter is loosing his family, Jesse has been tortured since the desert shootout. Todd, Jesse’s replacement, pulls Jesse from his prison cell and locks him up like an animal in the meth lab. Jesse walks through the lab in hand cuffs, seeing pictures of his loved ones along the walls. Trapped a prison of his former livelihood, Jesse is in a hell perhaps worse than death. In the final moments of the show, Walter leaves baby Holly with the fire department by placing her in a car seat and turning on the signal lights of the vehicle. The child is quickly found by a young firefighter (Noah Segan, long-time associate of the episode’s director, Rian Johnson—Looper, Brick).

Walter generically tells a great deal about his business on the phone while the police are listening on the other line. Skyler only wants her child returned and seems somewhat sympathetically. She is angered, but seems to understand that she may be talking to her husband for the last time. As regret washes over Walter, his mood changes several times during the conversation but ends when he finally says, “I’ve still got things to do.” These words could mean just about anything on any other show, but given that we know Walter later returns for the poison with a trunk full of guns, it will certainly be something spectacular.