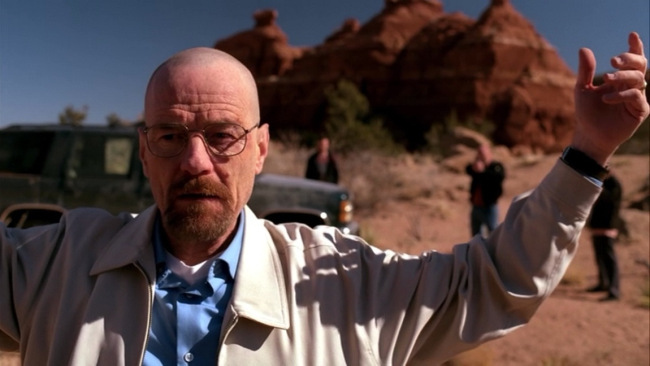 Breaking Bad is arguably one of the greatest shows on television. This week, the writing staff and creators have actually topped themselves with one of the best episodes they have ever aired. Vince Gillian once described the show as a “modern western,” and that has never been truer than in episode thirteen, “To’Hajiilee.”

In this episode, we finally see that Walt’s clever schemes have finally rubbed off on Jesse, who has come into his own as an independent thinker for the first time on the show. In an article written by Andrew Romano, he quotes the show’s creator in saying that although the show began as a tribute to The French Connection, the New Mexico setting has turned it into a Western. About Walter White, Gillian remarks, “A man alone against the horizon, being tested, testing himself, testing his mettle.”

“To’Hajiilee” begins with Uncle Jeff and Lydia Rodarte-Quayle peaking over Todd’s shoulder as he cooks meth at a 76 percent purity. “Where’s the blue?” she asks through her mask. Uncle Jeff and his goons seem satisfied but Lydia knows that her overseas clients will expect nothing but the best. In an awkward ending to the intro, Todd sort of makes a move on Lydia. Seeing that she is holding all the cards, she bats her eyes and Todd knows that he must continue to improve his cook. As she exits, Mr. White calls Todd (voice over ending from last episode) and puts a hit on Jesse.

The true chess game begins a moment later when Hank, Jesse and Agent Gomez are meeting underneath a bridge. Jesse reveals that his threat to Walt was about taking his money (even though Mr. White believed his family to be in harm’s way). Knowing Mr. White’s greed, Jesse sparked an idea that caught fire inside of Hank. Moments later, the boys are questioning Yule (Saul’s bodyguard) at a private location that appears to be a safe house. They show him a fake picture of a murdered Jesse and he quickly reveals everything he knows about Walt’s money, which isn’t much. In another clever play, they convince Yule to disconnect himself from the outside world for his own safety, as if the meeting never happened.

Walter has a sit-down with Uncle Jeff and his crew of killers. Despite the fact that he keeps admitting, “Jesse is like family to me,” the hit is on. The only problem is that Uncle Jeff will not activate the kill unless Walter agrees to cook with Todd once more. Jeff is finally put in a spot of power and he uses it wisely. Walt agrees to cook one last time with Todd as long as Jesse is taken care of quietly and without suffering. Walter then tries to flush Jesse out by visiting Jesse’s ex-girlfriend and her son, Brock.

At this point, the episode already seems like it could take the season in about half a dozen directions. Will Jesse get the voicemail and take the bait? No, Hank stops that ploy from unraveling. Will Uncle Jeff and his crew find Jesse? Will Yule really stay hidden? Will Hank find another clue to put Walt away? Then Saul Goodman walks into A-1, looking for Walt and posing as a customer. Walter Junior is so impressed to see Saul, because of his minor-celebrity in the town (which lets the audience know how little anything remarkable actually happens in the town besides all the illegal shenanigans that the lead characters are involved with).

Moments after Walter realizes that Saul is scared for his life and wearing a bulletproof vest, he receives a photo on his phone of a barrel of money in the dirt. Believing that Jesse has found his money, Walter quickly climbs into his car and speeds off. Jesse tells Walter that he will burn $10,000 every minute that it takes him to arrive and that if he hangs up the phone, he will burn the entire batch. Walter’s greed does show in this scene as he verbally admits most of his actions that have happened during the phone call, which include several murders. “I killed Emilio. I killed Crazy Eight!” In this moment, we see Walt’s weakness as he has finally been outsmarted.

As Walter pulls up to the location where only he knows his money to be, he looses signal on his phone. Not seeing Jesse (because he is still on the way), he takes the phone out of his battery (realizing he’s being tracked) and walks to the top of a small mountain. At this point, it’s difficult to tell exactly what’s going through Walter’s mind, but he seems to know that he has been bested. However, he only believes that Jesse is coming to kill him and doesn’t suspect that Hank and Jesse are working together.

Dust flies up in the distance and Walter puts his phone back together and calls Uncle Jeff. As if always waiting to kill an army, Jeff and his crew are hanging out at their headquarters and quickly suit up with vests and illegal firearms when the call arrives. Walter pulls a lottery ticket from his wallet which has the exact coordinates written as lotto numbers (brilliant). While on the phone, however, Walter sees that Jesse is not alone (Hank and Gomez). He calls off the kill, hangs up the phone, and slowly gives up.

While Hank is yelling for Walt to come out (he’s semi hidden behind a small boulder), Jesse is standing nearby. Completely alone, Walter steps from around the corner and Hank quickly spots him. He has a gun in his hand but he has no intention to use it. Walt follows Hank’s instructions that eventually lead him to being handcuffed. While Hank reads his brother-in-law his Miranda rights, Jesse smiles victoriously.

In his moment in the sun, Hank puts Walt in the back of the car and pulls out his phone to call his wife. “Baby, I got him—dead to rights,” he says to her relief. “Things are gonna be a little rough for the next couple weeks, but they’ll get better.” As soon as he hangs up, Walt shouts “Hank!” and the two cops turn to see Uncle Jeff and his crew of killers pulling up, fully loaded.

A conversation begins with multiple guns aimed at the two police officers. Both feds are slowly moving behind the SUV, which holds Mr. White in the backseat. Walter verbally tries to tell Jeff’s crew to leave, but these are the type of guys that know that they are already in too deep. Seconds later, bullets fly from both directions, turning the SUV into a cheese grader. Walter ducks in the floorboard and we’re left to wonder who will live and who will die until next week.