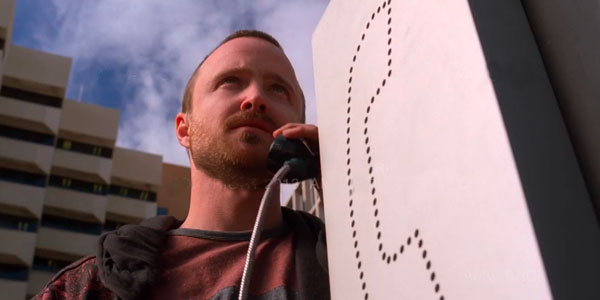 The last episode ended with Jesse pouring gasoline on Walt’s carpet and soaking the living room furniture. “Rabid Dog” begins from Walt’s point-of-view as he pulls up to the house with Jesse’s car parked diagonally in the front yard. Somewhat hesitant of the possibility of having to shoot Jesse, Walt enters through the bushes from the backyard, next to the pool. He pulls his now unfrozen gun that he got from the Coke machine out and enters the house. Quickly noticing the smell of gasoline, he begins to check the rooms for any sign of Jesse. Upon entering the final room—his bedroom—he concludes that Jesse must have changed his mind about the entire scenario. He leaves a message for Jesse and thanks him for changing his mind. At this point, we’re unsure about Jesse’s motives, but a flashback will fill us in later in the episode.

Walter has a time trying to get the smell of gasoline out of the house. He hires a man to fix the locks (not replace them) and another crew to clean the carpet. Through his actions, we get to see him come up with the idea he later pitches to his family:  he claims the pump at the gas station malfunctioned and sprayed gasoline on his clothes and in the car. He also admits that it was insensible for him to come straight home where he accidentally left his clothes on the carpet—explaining the smell. The family doesn’t buy it. Junior thinks the fumes connected with the chemo and made him pass out. Skyler falls for this story until they are alone. Regardless of the story, the family decides to head to a nice hotel for a few days.

Once the family has settled in, we see Walt leave for ice so he can speak with Saul in a car outside. This is the first time Walt has seen just how badly Jesse beat on Saul before entering his home with the gas. During their conversation, the main concern for Walter is simply finding Jesse. Saul, on the other hand, wants to find Jesse but also believes it may be time to put him down. Outraged, Walter asked him to explain his intentions. Saul quickly relates the scenario to the movie Old Yeller, describing Jesse as a once loyal companion, but now as a rabid dog. Walter isn’t hearing it, tells Saul that he wants to talk to Jesse and exits the vehicle. Back in the room, Skyler picks through Walt’s lies, knows Saul was outside and makes him tell her about Jesse’s gas fiasco. Without knowing it, she also agrees with Saul:  “Walt, you need to deal with this.” He replies, “Jesse isn’t some rabid dog.” Walt’s intentions always seem to put family first, but in this case, he still has a fatherly love for Jesse. Skyler continues:  “You’ve come this far—what’s one more?”

Cut to Jesse doing lines of coke on a CD outside of Walt’s house—pre-gasoline pouring. The outraged Pinkman pours gas on the furniture and carpet, soaking the living room. He then rolls up a magazine and pulls a lighter. The holy shit moment of the episode is that before Jesse can burn down the house (and possibly kill himself in the fire as he’s taking no precaution and not thinking clearly) is when Hank enters the front door with his gun drawn on Jesse. Without much thought, Jesse quickly assesses that Hank is working with Walter and is fed up with Walter getting away with everything. The flame continues to burn in his hand. “You really want to burn him down?” asks Hank. “Let’s do it together.” Jesse quietly climbs in the car with Hank, who buckles him up in a scene that suggests Hank is the new father figure to Jesse. The two talk in the car, confirming that Jesse will most likely be killed if brought into the DEA, so Hank must find another residence to keep the kid—his house.

In a short scene, we see Marie at therapy. She is unable to give her therapists too many details so he changes the subject and asks, “How’s work? Last week you were upset about the parking?” This is a humorous moment of how much her life has changed in the last past week since finding out about her brother-in-law being the meth king of the state. Back at home, she finds her bags packed at the front door. Confused, she eventually convinces Hank to spill the news that Jesse Pinkman is passed out in the spare bedroom and will be spending a few days with them. Understanding that this will hurt Walt, she decides to stay and encourages the action. While Jesse is asleep, his phone rings and Hank listens to the message on the voicemail. Essentially, it links Jesse and Walter together (while not saying too many specifics) and is Hank’s first piece of real evidence towards the partnership. When Jesse awakes, Marie gets him coffee and Hank and Agent Gomez sit him down for a video confession. We assume Jesse spills everything by their demeanor even though we don’t see the recap. During the confession, Walter has left another message for Jesse to meet him the following day. After some discussion, Jesse agrees to wear a wire to the meeting in hopes of finally catching Mr. White in action.

Jesse still believes Mr. White wishes to harm him and seems to be looking for any excuse to avoid the meeting, despite how public it is. His new father figure, Hank, also tells Gomez that no matter what, Walter is going down. Meaning, either the kid wears a wire and incriminates Walter as Heisenberg or Mr. White tries to kill Jesse (or succeeds), either way, he is going down. Ironically, the reality is that Walter is the only one with Jesse’s best interest in mind. At the rendezvous point, Jesse spots a beastly man that resembles a young hitman Mike. He believes this man to be a potential threat and stops in his tracks. After a beat, he walks to a nearby payphone, calls Mr. White and tells him something along the lines of, “Nice try—I’m coming for you.” Without letting Mr. White explain anything, Jesse leaves and is quickly picked up by Hank in an undercover van. Jesse was wrong about Mr. White’s intentions, but it seems far too late for any type of explanation and only Jesse knows his plan at this point. In the final moments of the episode, Walter calls Todd and tells him, “I think I have another job for your uncle.” Since we know Todd desperately wants to replace Jesse, it’s possible that he or his uncle will be the one to put Jesse down.