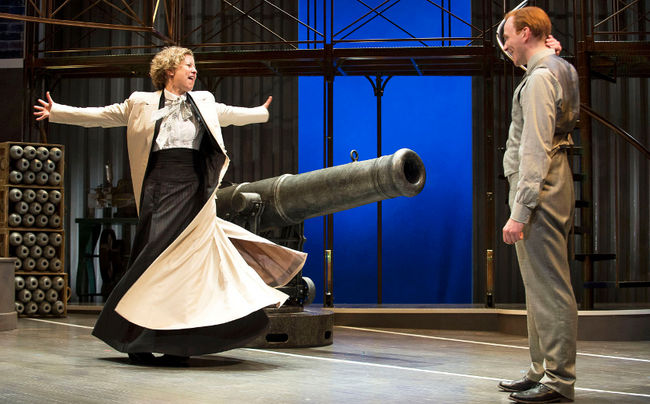 It seems genuinely weird to me that, in a season of 10 shows, Major Barbara is the only George Bernard Shaw text being produced at The Shaw Festival in 2013. Now, I’m not a great George Bernard Shaw fan so that’s not a huge problem for me, it just seems a little bit like principle abandonment and that feels odd (though I acknowledge that the mandate is “Shaw and his contemporaries”, I still think they could at least do two). But I suppose if you can only do one, Major Barbara is the one to do. It’s iconic GBS with its capitalist villain and speechifying good guys.

Artistic Director Jackie Maxwell states in her director’s note that she wanted to shift the play’s focus from dark capitalist Andrew Undershaft more towards his titular daughter Barbara, an idealistic Salvation Army leader. The move seems a little arbitrary without making more changes to the text itself but the effort is appreciated considering that the villainous Andrew is played by the boringly simplistic Benedict Campbell and the self-righteous but winning heroine by Nicole Underhay.

In my years reviewing the Shaw Festival, I’ve come to adore Nicole Underhay. She’ s sunny and energetic, sweet and light-footed, but can pack an emotional punch or command a stage with the best of them. This combination is perfect for Barbara as Underhay infuses the character with so much kind-hearted compassion and bright-eyed belief in the good of people that the preachy side of the character seems not only less overbearing but actually seems earned (such a woman has worked for her right to be a little hollier than thou; she Is hollier than thou with all that walk walking). She’s joined by a winning cast of characters highlighted by the lovely Graeme Sommerville’s complicated Adolphus Cusins and Wade Bogert-O’Brien’s snippy comic Charles Lomax, but this is Underhay’s show.