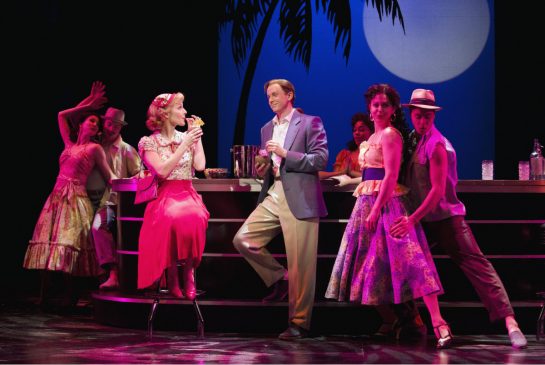 Don’t take the title of this article the wrong way- Old Hat is just fine when it comes to Guys & Dolls. In fact, it’s the only way to do it. A musical so firmly rooted in its time and style shouldn’t really be tampered with. It should just be performed somewhat rarely so the audience doesn’t feel like they’re seeing the same thing for the 50th time (on this point, Ontario audiences are not so lucky). Essentially, the success of a great Guys & Dolls lies entirely in the chemistry and character work of the cast (in addition to great choreography, which never hurts). Find yourself a dreamy Sky, a memorable Nathan and a great Adelaide and you’re pretty much guaranteed a success (even if your Sarah is preachy, stiff and armed with an eeky, substandard soprano like she is here).

Shawn Wright is a dry and mischievous Nathan who plays perfectly off Jenny L Wright’s sublimely funny Adelaide. With an Edith Bunker screech and flawless comic timing, J Wright steals the show easily from the bigger stars, including the questionable leading lady and a very ill-cast Thom Allison as criminal chubster Nicely-Nicely Johnson (though he does a fairly good job with Nicely’s big number, the great “Sit Down, You’re Rockin’ the Boat”, the role is a waste of Allison’s voice and a strain on his comedic chops). Peter Millard makes a nice, nuanced turn as Arvide Abernathy and the incredibly winning Billy Lake stands out in the too-small role of Benny Southwest. But it’s the ever-dependable Kyle Blair who makes Guys & Dolls fly. He doesn’t have any hint of the dark, almost dangerous edge that many a great Sky has but with a sharp wit, buckets of charm and that killer tenor he’s exactly as swoon-worthy as the cunning gambler needs to be to sell the story. The only real problem with nice-guy Blair’s suave Sky: why on earth does Sarah take so long to fall for him?