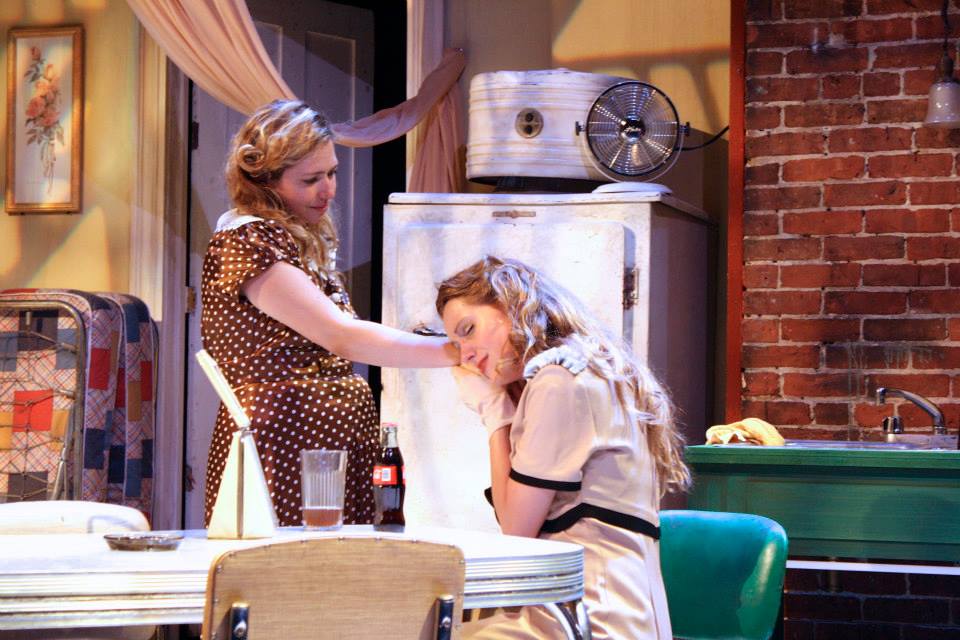 Wanting to Hop on A Streetcar Named Desire

I am not a Tennessee Williams fan. I just cannot appreciate his style or his place in the American theatre canon. Perhaps I think he’s a tad too fixated (as part of his times) on gender and sexuality binaries. That said, I knew that I had to catch Wax Wings Productions’ A Streetcar Named Desire. The company has made a splash on the Boston fringe theatre scene, and the production featured one of my favorite Boston actors, Jesse Wood. Surprisingly (and unsurprisingly, at the same time), I was not disappointed.

Perhaps the highest praise that I can give for this production is that I finally understood the magic of and fascination with this play. Under the steady and, at times, masterful direction of Vicki Schairer, the cast keeps the play moving forward with beautiful moments and breath-taking pacing. Schairer does a truly commendable job assembling this all-star cast and she develops and nourishes each character with a sense of purpose and respect. This respect to the development of each character pays forwards tenfold in each actor’s performance. Before I give each actor his or her due respect and acknowledgement, I have to recognize the stage manager, Ross Magnant, for keeping the production moving at a perfect tempo and rhythm, while managing some difficult technical elements. While the entire technical team did a stand-out job producing this play in a space that I considered unworkable and perhaps even ambitious, set designer Megan Kinneen deserves the highest praise for creating such an impressive and functional set in the Factory Theatre. I have rarely seen the space used so well and in such an immersive way. Because of the seamless technical elements, the actors could focus on their jobs: to tell this story in a compelling way.

To begin, Jacqui Dupré’s Stella Kowalski exceeds expectations. Dupré takes a character that could easily slip into the background of this talented cast, however, Dupré makes her Stella a woman with whom to be reckoned.  Her Stella is sharp, aware, and, most of all, driven. Her raise of an eyebrow, slant of a smile, and lusty eyes make her Stella one of the most three-dimensional characters that I have seen in recent memory. To take all of this from a character who has been described in many theatre classes as a mere foil of her more interesting sister, Blanche, is what makes Dupré’s work all of the more astonishing. Of course, Jesse Wood as her brutish husband Stanley Kowalski did not disappoint. While some audience members may expect a more brutish portrayal of this iconic role, Wood plays his strengths and comes up in spades. Wood is one of those actors who could recite the phone book and I would listen with captive ears; to say that he is charming and engrossing onstage is an understatement. Wood harnesses his natural charisma and channels it into his unique interpretation of Stanley. Rather than commanding Stella through force, Wood’s Stanley is manipulative, charming, convincing, and alluring. His smile with a touch of roughness and raw sexuality is enough to remind the audience that behind the façade is a man who dominates, inside and outside of the bedroom. Instead of a bull in a china shop, Wood creates a more three-dimensional character by creating a tiger waiting to pounce on its prey, the enticing elegance and charm with the underlying ability to harm anyone in his path. Dupré and Wood’s scenes are electric and flesh out so much backstory between these characters that I could see a sequel relating the struggles of these complicated lovers.

Equally commendable is Patrick Curran as the loveable Harold “Mitch” Mitchell. Curran’s warmth is apparent in every blush, awkward glance, and stuttered murmur. He draws his insecurity from a sincere place, grounding himself in a character with a rich backstory beyond just a “mama’s boy.” In fact, his greatest strength is finding the moments to enrich his character’s story. Curran wastes nothing in this role, always seeking to understand and relay himself better. For that, I thank him because I finally understand Mitch as a character and a person. Which brings me to Blanche Dubois. This is a role for which theatre dreams are made. Immensely complex, dauntingly difficult, and exceedingly diverse, Blanche is not a role for the light-hearted or amateur. Danielle Kellerman attacks the role with veracity and commitment. Kellerman’s Blanche rides the emotional rollercoaster of the play, at first aloof, haughty, and demure, and her Blanche descends into a turmoil of brokenness and despair. Indeed, Kellerman’s journey is the major arc of this play, and she plays it with such slow, methodical, yet subtle, grace that it is like she was born to play a Southern belle, tossed around in the sea of the harsh world. While Kellerman’s accent and affected tone took some getting used to, I found the transformation well worth the uncomfortable moments in the beginning of the show. In fact, in retrospect, I would not have asked for anything else. While I may not have agreed with all of Kellerman’s choices, her Blanche as a whole was purposeful, engrossing, and compelling, adjectives for which the role demands. Kellerman delivers while leading this strong cast.

I look forward to future works by Wax Wings Productions, a young Boston fringe company. If they can tackle an American theatre classic with such commitment, verve, and heart, I can’t wait to see their next production.