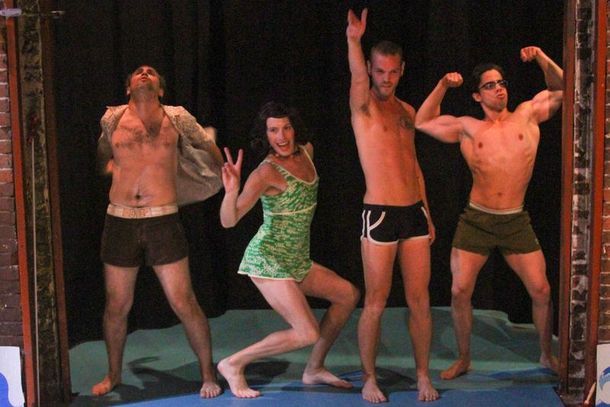 Sigh. It’s never a good sign when I sigh. I really wanted to love this production. Hell, I wanted to love it. I am a huge fan of the movie, having found it one day while surfing channels in my young adolescence. However, the play produced by the joint efforts of Happy Medium Theatre and Heart & Dagger Productions does not live up to its source material. In fact, the production feels completely new. Now, for many people, especially those unfamiliar with the movie, the change may be unnoticeable, enjoyable, or even welcomed. Therefore, take my criticism with a grain of salt for someone who came to the production with clear expectations.

On the night I attended, the cast was just not funny. Maybe I tried too hard to compare them to their roles in the movie. Or maybe the style was just off. The movie is an off-kilter, campy satire and commentary on the popular beach party movies and slasher/thriller movies, drawing on the stereotypes and paradigms the way that my generation pokes fun at horror movies with the plethora of Scary Movie movies. And here lies my biggest critique: the production seems to focus on getting the commentary and aloofness necessary to attack the genre and parody the silliness of the beach movies and ridiculousness of the thrillers, but misses the mark to create effective theatre because they forego any sense of heart or realism. I may be alone in my analysis of comedy, but I truly believe that effective comedy comes from a real place. This hyper-reality is humorous for the audience because the characters are blissfully unaware of their own hilarity. The problem is when the actors know too much. Once a cast knows that its work is funny or meant to be humorous, they “play” jokes, instead of playing a role. Now, I’ll admit that farce and parody differ from other comedies, but the roles still require some commitment to creating a purposeful and real character. Unfortunately, this production lacked this essential element.

The actors certainly have fun onstage and they try to engage the audience at every turn in their joy. The cast is in fact fully committed towards this common goal of fun and merriment, never taking itself too seriously. However, I would have appreciated a touch more seriousness and commitment from them to their roles. At the heart of the play is Joey C. Pelletier as the innocent, tom-boyish Chicklet. I wanted to like Pelletier in this role; I fell in love with him in his MilkMilkLemonade as one of my first Boston shows as a reviewer. I thought this role would be more dimensional role for him to tackle with his familiar gusto and skill. Chicklet seemed to overwhelm him, and I wondered if adding the drag component to the mix lost something. The Chicklet in the movie has a certain sincerity to her that is both humorous and heartbreaking. While Pelletier is certainly entertaining to watch, his Chicklet never feels innocent; in fact, she seems more worldly than most of the characters, perhaps because Pelletier always seems aware of the humorous moments and lines, almost like a tongue in cheek. Tongue in cheek humor is appreciated, just not in this role. From there, everything spiraled downhill for this production for me.

Mikey DiLoreto and Daniel Raps as the Italian Provoloney and knucklehead Yo-Yo, respectively, never seem fully comfortable with each other. They seem almost too aware of their latent feelings for each other, instead of letting the audience discover the truth before the characters. Part of the fun for the audience is the discovery, and, like many elements and moments in this show, the discovery was missing. Additionally, Barbara DiGirolamo’s Nicky seems out of place among these beach bums, partly because I was never clear in regards to her character’s gender and partly because the role is horribly written, seeming to act as a mere plot device for when another voice needed to say a line rather than as a three-dimensional character. Francisco Marquez’s Star Cat seemed wimpy; indeed, the actor seemed to stumble over the smooth charm of Star Cat rather than make it his own. He seemed comfortable onstage until he opened his mouth or interacted with his fellow cast members. Mike Budwey’s Kanaka makes some of the better strides among his beach bums, but still falls short, partly because he never exudes the cool sexuality of the original Kanaka and partly because he lacks the supporting cast to make him seem worthy of the audience’s appreciation.

The women fair slightly better. First, Audrey Lynn Sylvia does much better as Mrs. Forrest than in her turn in The American Plan; she benefits from the comedy while creating a rich enough mother character to withstand the twists and turns in the script. Lauren Foster’s Bettina Barnes is seductively complex at times, though she falls into some unwarranted camp at other times, perhaps taking her cue from the rest of the cast. One of the best performances is by Amy Meyer as Marvel Ann. Meyer really dazzled because she took herself so seriously. In this commitment came some genuine moments of humor. Instead of telling us that something was funny, she simply showed us the humorous moments for her character. Showing, not telling. The master of the practice in this production was Elizabeth Battey. I acknowledged Battey’s work in Polaroid Stories last summer because of her rich relationship with Michael Underhill. While Battey uses the same wide-eyed innocence here as in that show, somehow, the performance feels fresh. Maybe, because the rest of the show felt so stale, I needed some sincerity even if the sincerity and character felt like a vocal version of the Echo that I had seen last summer. However, Battey’s Berdine hit all of the right notes for me. I was thankful but slightly disappointed that a Berdine impressed me more than some of the more classic roles in this hilarious show (note: I couldn’t tell you who played Berdine in the movie if that gives you any indication about how forgettable the role can be).

Both theatre companies have produced solid work in the past three years. Unfortunately, I did not feel like this production was their strongest work, not even close. The set, unlike their other productions, felt like a mix-match of dollar store finds and forgotten knickknacks. The moments and transitions did not feel sharp or polished. In fact, when they weren’t trying to impress with their understanding that they are and can be funny, they seemed bored with the source material, like they needed to vary from it, instead of telling these characters’ stories. In some ways, they seemed to act like they were above (even too good for) their characters. While I am disappointed, I am not discouraged. These companies combined for substantial success last summer in their Polaroid Stories, and I anticipate each of the companies will continue their success as long as they are not too complacent. Sometimes beach weather gets the best of us.