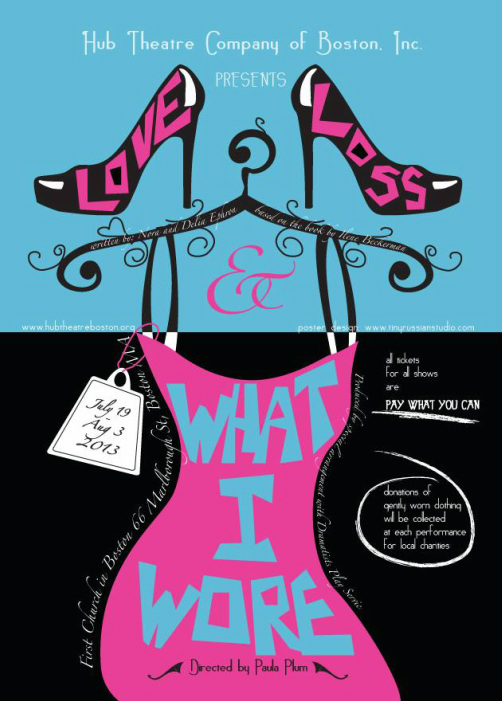 Love, Loss and What I Wore

This is the first Hub Theater Company show I’ve seen and I wasn’t sure how I felt about it when I walked away. Nora and Delia Ephron’s play, based on the book by Ilene Beckerman, gets the job done but leaves a lot to be desired. It starts out with a really great set-up. The play operates as a spiritual little sister to deeper shows like The Vagina Monologues. It is a stripped down collections of monologues, memoirs, and a few group scenes that are more of a collection of one-liners on a theme. There thematic arc here is one woman (and therefore all women) remembering her life via her clothes. I like the idea of highlighting that despite our high-minded notions of feminism that says women are concerned with more than clothes and shoes – many of us still have a strong connection to our favorite pieces.

I’ve certainly had my share of favorite sweaters, special dresses, or teenage angst over fitting in fashion wise. Judging from the audience, most of the jokes and nostalgia hit home. The best were the comedic “clotheslines” where the 5 actresses threw out one-liners on a theme from: your mom buying you clothes you hate, buying your first bra, trying on clothes, to the eternal “I have nothing to wear”. Unfortunately, these funniest scenes were also the least important. Many of the scenes were extremely detailed callbacks that could have been important if they built toward a character. With one-shots the scenes served as an extended nostalgia trip without anything more to say. Yes, a girl was worried about wearing the right thing at school, and now she’s grown up and more confident. I’ve seen that story told more compellingly in a Disney channel movie (that’s not necessarily a dig, some of the Disney channel movies of my childhood were awesome. Think Disney Channel movies of the nineties/early oughts). Some of the characters were charismatic but it was too bad they didn’t give them anything remotely interesting to do together. If was difficult to decipher which characters were recurring and which were one-offs. Some of that is due to the lack of set and costumes, but come on. I’ve seen one guy play identical twins and you could still tell which character was onstage based on a change in stance, rhythm, vocal differences etc., but no such luck here.

You rely on the actors much more heavily to convey the tone of the play as well as the tone of their character when you do a minimalist show. I love bare stage performances. Black box theater with mostly black costumes, and lights that aren’t so much a story telling tool as a tool to see the actors – bring it on.  However, there also has to be a strong intention with leaving things blank for it to really be effective. A bare stage can mean a lot of things, it can show the loneliness of drama, the stark reality of tragedy, or absurdity of humor, but here it mostly just emphasized the lack.

The actors were passable to good in their monologues, with Adobuere Ebiama shining as the most charismatic person on stage every time she opened her mouth. Unfortunately that was not as often as I would have liked. June Kfory as Gingy – the character who leads us through this clothes-lined drive down memory lane – missed the mark for me. She was clearly trying, but like a smile that unnerves because it never quite reaches the eyes, she didn’t read sincerely enough to make her scenes immersive. If it had been spots of actor unbelievability I could say they were having a bad night, but with the whole show cast in a thin layer of uncanny valley acting, I have to hand the blame to Paula Plumm. I can’t say I’m surprised, and that means you have to take this finger-pointing with a grain of salt. I didn’t enjoy her work with Romeo and Juliet, and her Macbeth had some directorial problems as well. I don’t know if it was a lack of heart or attention but the center of the wheel is tragically missing. Even the tragic scenes, such as Linda Goetz monologue about breast cancer were not given the proper breathing time to let the audience connect. You can’t take for granted that the audience will emotionally turn on a dime because you bring up touchy subjects such as abuse, heartbreak, or sickness. You have to earn it. Goetz was moving because she took the most time discovering the pain of the monologue in front of us. Moving too quickly past heavy moments undercuts the emotional investment the audience is being asked to give. It shows your hand– you are not confident enough in your productions that you need to keep the audience laughing to make sure they are still with you. In that way, and with the nostalgia callback without a deeper thread, the show felt pandering. Yes, having an audience remember good times and bad times they had in clothes is a good way to capture their interest, but all too often that’s all the scene had to say. It might be asking for more than the play had to give, but there must be more than “Hey remember this, wasn’t this embarrassing,” or “I know you’ve said this before.”

I’ll give Hub Theater Company another shot, because they’ve assembled a good group, picked a play that wasn’t safe, and made choices. But I think I’m done with Paula Plum. I would rather see a train-wreck of well-intentioned bad decisions than an inoffensive production that can neither make bold choices nor let its talent have a try.