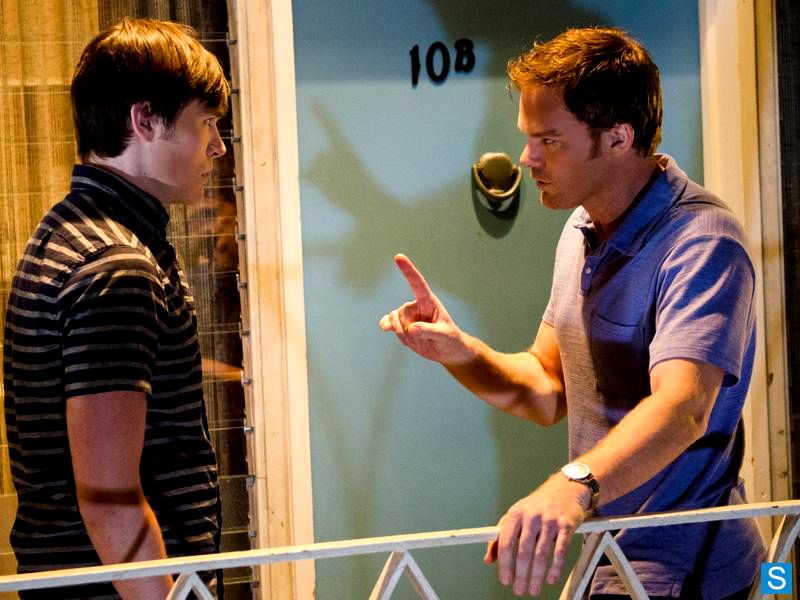 Beginning moments after the previous episode, “Dress Code” opens with Dexter waking up in the middle of nowhere. On the other side of town, his phone vibrates from Dr. Vogel’s call and wakes him. Remembering that he saw Hannah McKay during the possible poisoning, he quickly hung up to take another call from Deb. His sister agreed to pick him up and the two discussed the incident, unsure of why Hannah would poison them enough to knock them out but not kill them. They then noticed the traffic cameras around the bridge where Dexter awoke. Dexter is more curious than angry but Deb clearly states, “I want her gone,” as if organizing a hit.

Because he was knocked unconscious and left in the middle of nowhere, Dexter missed a morning appointment with his future protégé, Zach Hamilton. With boastful excitement and little guidance, a semi-angry Zach shows up on Dexter’s doorstep after dark. Furious, Dexter focuses his confusion and anger on Zach, telling the young man that the duo should never be seen in public together. In another backhanded piece of advice, he informs Zach that he should get a job because Zach is a “weird guy who lives with his mom…[who] might as well be wearing a sign.” While absolutely correct, his poor leadership is building a fire within Zach, who has yet to learn any aspect of Harry’s code.

Using the information from the traffic cameras in the first scene, Dexter tracks Hannah down to a rental car and finds out that she changed her name to Maggie Castner. Finding her on an enormous yacht with a near-billionaire, Dexter’s curiosity continues to grow with a not-to-subtle undertone of jealousy. Following the couple to a private club known as the Red Coral Club, Dexter is turned down at the door. Despite his father figure telling him to leave it be, he decides to ask help from his new protégé—whose father has a membership—to help him get inside. Dexter has already broken the only rule he gave Zach, while also inviting the boy to see another detail of his past life. Inside, Dexter finds out that Hannah is married to the man (Miles Castner, casino mogul), but uncovers little additional information.

Dexter catches Deb up on the situation and she deduces that he is still in love with Hannah. Her husband Miles seems to be fully aware of her past, including her relationship with Dexter. Our hero is unwilling or too blind to see that he does still have feelings for Hannah, despite that she was possibly trying to kill the Morgans once again. “Trust me,” begins Deb. “No one knows what it’s like to fall in love with the wrong person more than I do, but you better get your fucking head on straight. Hannah is everything that is wrong with our lives.”

In addition to everything else, Miles Castner seems to have his own connections of evil as he steps up into the jealous husband role. While Dexter is pumping gas, Castner startles him by pulling up next to him at a neighboring pump. While he doesn’t seem overly violent, he makes it clear that his connections could put Dexter in jail. As for his new bride, he also comments, “I’d sooner see her in prison than lose her,” displaying his possessive, selfish nature. Feeling that Hannah is actually the one in danger, Dexter quickly texts her and they agree to meet at the greenhouse. Once together, he begins a series of questions and she finally reveals that she married Miles because he could supply her with a much-need new identity. In the final moments of their interaction, she admits that her initial plan for going with Miles to Miami was in order for her to find Dexter and ask him to kill and dispose of her new husband. She also reveals that Dexter was her only true love.

Chasing Hannah has made Dexter forget about his scheduled rendezvous with Zach, who is becoming more damaged by the second (potentially losing another father figure). Dr. Vogel warns Dexter that he and Zach are apples and oranges, because even though Harry taught Dexter to wait to kill, Zach could not be given the same advice because he already had blood on his hands. She commended Dexter once again for not killing the boy, but made sure he understood that Zach is now his responsibility. Dr. Vogel was proved correct once again when Zach shows up at Dexter’s doorstep, unannounced. Hearing pounding on her neighbor’s door, Cassie pops out as her usual friendly self to tell Zach that Dexter must not be home, but she would gladly pass along a message for him. Like the pissy teen he first appeared to be, Zach does leave a message for Dexter:  “Fuck you.”

Meanwhile, Deb has a tracker placed on Dexter’s car, so she is usually only a few steps behind her brother throughout the episode. At his vehicle, Dexter sees two men dressed like Johnny Cash approaching when he is ambushed and beaten up in the ally behind his house. This is one of the rare occasions where Dexter was actually bested and seems to have occurred because of his feelings for Hannah, which clouds his mind. Realizing that if Miles is willing to hurt him, he must be willing to hurt Hannah, Dexter quickly gets in his car and heads to the shipyard. Inside their bedroom, Miles gets physical with Hannah as Dexter sneaks onto the yacht. As he makes his way to the room, he finds Hannah covered in blood and kneeling over the dead body of her husband. Dexter requests bags, bleach, and some sort of saw to help dispose of the body.

Dexter is distracted by a work call and leaves Hannah after ridding her of the body. The address is right next door—inside Dexter’s apartment building. While the facts are not yet part of the equation, it seems that Zach has taken another life. Cassie lies in a pool of her own blood on her floor, which is set up exactly like Dexter’s apartment. Much like Norma Rivera (Zach’s first kill), Cassie has been held down and beaten to death, possibly sending a message to Dexter. As he looks at his reflection in her blood, he also reflects on the situation:  “Harry was a good teacher to me because he was normal—human. But can anything good come from putting two killers together? Whether it be student and teacher or whatever Hannah and I have? Or will it always end the same way—like this?”