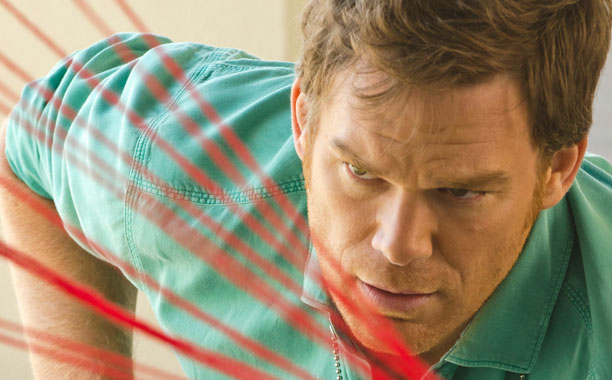 Halfway through the final season of Showtime’s Dexter, audiences are invited to meet a new Dexter protégé as well as reminisce with a past lover. “A Little Reflection” begins with Dexter continuing to trail Zach, the rich son that is most likely a maid killer. Young Zach also has a fascination with blood as well as bodies as he reveals that he sometimes forgets about the body when taking photos of the blood was “she spilled for him.”

When Dexter realizes that Dr. Vogel is meeting with Zach, he turns on her once again. This action is understandable but comes off appearing more like jealousy than anything else. Dr. Vogel stops him by telling Dexter that she can’t discuss Zach’s case, despite the circumstances. In theory, she is trying to regain her former morals of a psychologist—whatever those may be.

Dexter eventually confirms his suspicion than Zach killed Norma, a former mistress of the boy’s father. Once he takes this evidence to Dr. Vogel, she offers up the idea that he teaches the boy the code that she and Harry once taught him. Dexter once again is put off by the idea but seems to appreciate the thought more than before. While he still feels like a “special scenario,” the possibility of training another certainly does sound enticing. He admits that there are things he will never be able to tell Harrison.

In less exciting news, Dexter finally goes on a date with his neighbor, Cassie. Before drinks, Dexter finds himself backed into a conversational corner when she begins to pry—asking all of the basic first date questions. In an effort to sound interesting, Dexter talks about his son Harrison, his job and his boat. Once he reveals that he literally only takes the boat out and back (because he obviously can’t say “to drop off bodies”), she once again grows cold despite her initial attraction to our hero.

Meanwhile, Deb helps her boss Elway catch his sister’s boyfriend as a cheater by pretending to seduce him while he records the incident from a distance. When the cheater took the bait, Deb led him to the elevator with plans to visit his room. Elway came around the corner and punched the cheater in the face, causing Deb to spill her drink on her outfit. Needless to say, Deb is angry with Elway for how he handled the situation. Despite this incident, there still seems to be more to Elway that we haven’t seen*.

Because Batista decided to promote Miller over Quinn (despite making Quinn jump through hoops the last few episodes, his sister Jaime’s party was essentially ruined. Another party downer was when Masuka decided to give his new daughter $5k, because he felt like she was only reaching out to him for his money. This backfired when she grew angry with him for spying on her financial problems, stating that they were her problems. Dexter also seemed to be a little jealous of Cassie’s date at the party.

When Dexter finds out who Zach’s next kill will be (another mistress), he decides to follow him and then tranqs him before the boy can kill his father. Zach still has somewhat of a missing backstory (in terms of being “born in blood” like Dexter), but he seems to be committing all of these crimes so his father will finally quit cheating on his mother—even if that means killing his cheating dad. While Zach is on Dexter’s killing table, Dr. Vogel’s words sink in and he decides to let the boy live. Dexter will teach Harry’s code to the new killer—assuming Dexter lives long enough to do so.

In the final moments of the episode, Deb and Dexter are spending some time together at her condo. She spills the details about the sting operation on Elway’s sister’s boyfriend and admits that she feels Elway likes her more than just an employee. During the conversation, she starts to fill light-headed and falls over in her seat. As Dexter stands to assist her, he falls as well. Before blacking out, Dexter looks over to see Hannah McKay (Yvonne Strahovski), his former girlfriend who was known for poisoning her victims.

*Coincidentally, it’s interesting that Elway is always giving Deb special drinks at the office. While most of these are hangover cures, it still seems strange that Hannah is brought back into this season, due to her special code of killing. I can’t help but continue to question Elway and his motives…