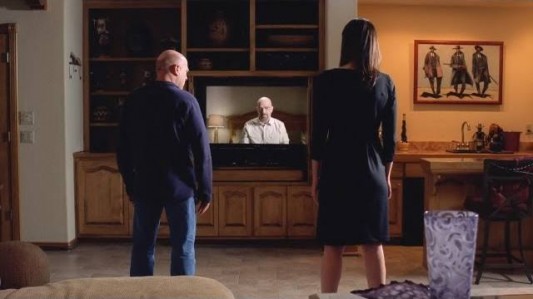 Since the beginning of Breaking Bad, there has been a growing hatred towards the character of Skyler White. She began as a character with a strong backbone and firm set of morals and seems to have become a target of ridicule and general loathing. On August 23, Anna Gunn sent in an op-ed piece to The New York Times about her reactions to the character as well as a response to the growing hatred from the audience.

“I was astonished: how had disliking a character spiraled into homicidal rage at the actress playing her? But I finally realized that most people’s hatred of Skyler had little to do with me and a lot to do with their own perception of women, and wives. Because Skyler didn’t conform to a comfortable ideal of the archetypical female, she had become a kind of Rorschach test for society—a measure of our attitudes toward gender.”

Despite the hatred, Anna Gunn is standing her ground and so is Skyler. One of the strongest moments of the series was Skyler telling Walt that she was waiting for the cancer to return. Since Walt hid the money and decided to leave the game, the two are finally working together, even though Walt continues to keep some secrets to himself.

“Because Walter is the show’s protagonist,” writes Gunn, “…there is a natural tendency to empathize with and root for him, despite his moral failings. As the one character who consistently opposes Walter and calls him on his lies, Skyler is, in a sense, his antagonist. So from the beginning, I was aware that she might not be the show’s most popular character.”

“Confessions” shows Walter White running around trying to save himself, manipulating everyone in his path. While some confessions are brought to the surface, none of these seem to be voluntary. Trying to guarantee his own safety, Walter manipulates Walter Junior, Jesse Pinkman, and his brother-in-law, Hank. Walter calculates everything, but one wrong move will cause all of these actions to spiral out of control.

The episode begins with Todd explaining the train robbery to his uncle Jeff and another ex-con. It appears that Todd is taking over the business with some help from Lydia. These two appear to represent the new Walter and Jesse. They appear more organized in the beginning, but are only working together in terms of greed. It’s likely that these two will have some success before complete failure. There is also a strong correlation between the opposing forces of Todd and Jesse. Both seem to seek approval from Mr. White, but Jesse seems caring while Todd seems to be more of a sociopathic drone.

In Hank and Jesse’s interrogation conversation (that ended the last episode), Jesse seems to walk the line between wanting to come clean and being loyal to the business and his former boss/partner. Perhaps if someone besides Hank (the man who beat the hell out of Jesse in a previous episode) had confronted Jesse, there might be another story to tell. But, because of Hank (and Jesse’s street loyalty), he kept his mouth shut, told Saul about the interaction, and agreed to meet Mr. White.

Walter’s manipulation begins with his son. Walter Senior tells Junior about the cancer returning but does so in a way that is purely self-serving. Marie has invited Junior over for dinner when his dad stops him at the door. Knowing that the boy’s aunt is planning to keep him there, Walter tells Junior about the cancer in a touching moment, that would empathetic if it wasn’t being explained for all the wrong reasons.

Hank and Marie agree to meet Walter and Skylar at a local family restaurant. Hank’s side wants Walter to confess (or kill himself) and Walter wants them to leave his children alone and back off. Seeing that Hank will not simply back off, Walter places a pre-recorded disc on the table as he and Skyler exit. The tape appears to be a confession as it begins, “My name is Walter Hartwell White…this is my confession.” The mood quickly turns as he continues: “If you’re watching this tape, I’m probably dead. Murdered by my brother-in-law, Hank Schrader. Hank has been building a meth empire for over a year now, and using me as his chemist.”

The hat trick ends with Jesse in the desert. Playing concerned father, Walt convinces Jesse that if the two were in opposite shoes, he would leave in a heartbeat. Since Jesse doesn’t really have anyone left (he’s really only had Walter and Mike over the past year), it does make sense for him to leave. The tone, however, throws Jesse and he calls Walter on his bullshit:  “Drop the whole concerned dad thing…you’re acting like me leaving town is all about me…but it’s really about you.” While it seems like another stare-down, the scene ends with Walter hugging Jesse. The action can really be judged as good or bad, depending on which backstory is inserted.

If nothing else, the desert hug is a goodbye. It can also be perceived as an admission of guilt for killing Mike (which Jesse already knows), or an admission of poisoning Brock (which Jesse is about to find out). Bringing this action back is a brilliant move by the writing staff and potentially why we see Walter (with hair) return to his home to get the white powder in the first episode. Jesse stood alone on the side of the highway, after Saul’s assistant, Huell, dropped him off. Not trusting Jesse, Saul had the man lift his bag of weed. Jesse realized the action had happened before:  right before Brock had been poisoned. Enraged, Jesse breaks into Walter’s house and begins dumping gas all over the floor and furniture.