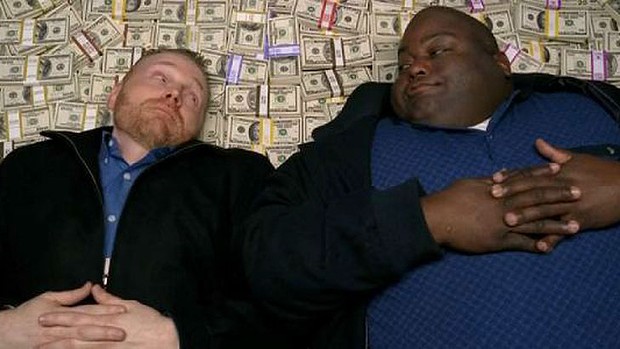 Within the realm of Breaking Bad, nothing is too peculiar. In last week’s episode, when Jesse was flinging out $10,000 wads of greenbacks like a paperboy (while fighting back tears of guilt), it seemed like his rock-bottom-moment was about to pass. On the contrary, it turned out he was only circling the drain. “Buried” begins with an old man cranking his truck before dawn. He’s surprised when the headlights reveal a single stack of money in his driveway. Leaving his truck to run idle, he picks up the cash and looks around. Seeing another stack in his neighbor’s yard, he is soon collecting cash stacks like a child picking up Easter eggs. As if connecting-the-dots, he soon stumbles upon a car crashed in the side of a playground swing set. Nearby, Jesse Pinkman is still awake, although quite numb to the world as he stares into the night sky.

After the opening credits, we cut to Walter exiting Hank’s garage, where the accusation (and right hook) took place. The gash over Walter’s eye reflects little on Heisenberg’s face. In somewhat of a Mexican standoff, Heisenberg stands next to his car while Hank firmly plants himself in the garage. Hank presses the button to close the garage door and Heisenberg turns back into a panic-ridden Walter White. He climbs into his car and hurries off the premises, stopping a few blocks away to call Skylar. Unable to get through to her, an assistant at the carwash tells Walter that she is on the phone with someone else. On the driver’s side mirror, Walter sees Hank exiting the house with a phone to his ear. Putting two and two together, Walter asks, “Who is Skylar on the phone with?” Making eye contact with Hank, he drops his phone and peels out, heading to the carwash.

Off screen, Skylar agrees to meet Hank at a diner. As she approaches his booth, her face reveals just how scared she is of the unknown consequences of Walter’s actions. He stands on his poor leg to hug her and they cut right to the chase. “It all makes sense now—I get it,” he begins, referring to Skylar’s pool incident, Walter’s gambling lies, giving up the children, and possibly the affair. “That’s all behind you, starting now. You don’t have to be his victim anymore,” he continues. Skylar says very little during the conversation. As viewers, we’re left to wonder which side she will choose. This is truly the moment she has been waiting for and if it had happened in any other season, more-than-likely Walter would be in jail. When Hank places a tape recorder on the table, it seems that she’s pro-Walt and that she was merely seeing what Hank really knew. “I’m here to help you, but I need your help,” says Hank. Realizing Hank has little evidence beyond suspicion, she asks for a lawyer and tells him nothing.

Saul sends two of his guys to pick up Walter’s cash from the storage unit. Seeing the bed of cash, one says, “I gotta do it man” and plops down as if he’s going to take a nap. “We are here to do a job, not channel Scrooge McDuck,” says the other, before lying next to him on the once-in-a-lifetime opportunity. Walter waits with Saul and the two discuss the possibility of Skylar giving him up. Saul suggests killing Hank and Walter quickly shuts down the idea, stating, “Hank is family.” In this scene, it’s clear once again that Walter will do anything for family and Hank will do anything for justice. Hank’s first move was to put a wedge between the Whites and corner Skylar alone. Soon, Saul’s goons show up with a white van and the money from the storage unit divided up into barrels. Walter checks the money and says “close enough,” assuming they took some of the enormous stockpile, even though he’s in a beggars-can’t-be-choosers scenario.

The Whites next moves are both offensive and defensive. Marie visits Skylar and the two discuss everything. Actually, Marie talks as if she’s revealing her entire inner monologue while Skylar cries. Marie then slaps Skylar when she realizes that her sister knew about Walter before Hank was shot. In the next scene, she’s trying to leave with Skylar’s baby, but Skylar certainly won’t allow that. Hank enters from outside and breaks up the fight, making Marie give back the baby to it’s mother. Meanwhile, Walter has driven the van out into the desert. While dying of cancer, he digs a whale-sized hole, big enough to store all of the barrels of money. He covers it up and checks the longitude and latitude of the exact location, placing two plants as markers. Repeating the numbers several times for memorization, he smashes the device on a rock. It’s important to know that Skylar and Walter have still not spoken at this point—around twenty-eight minutes into the episode.

Walter makes it home, covered in dirt from the dig. Skylar finds him in the kitchen and follows him to the bathroom, talking the entire time. He strips down to his whitey-tighties and socks (his defeated outfit) and faints from exhaustion, landing hard on the tile floor. Skylar gathers a comforter and pillow and sits by his side for the next five hours until he wakes up. She reveals that she knows the cancer is back. He asks, “Does that make you happy?” referring to a comment she made during her frightened phase. Unsure of what Hank knows, Walter then states, “I’ll give myself up if you keep the money. Never give it up. Pass it on to our children. Please don’t let me have done all this for nothing.” Being the voice of reason, Skylar informs Walter that giving himself up would mean giving up the money. Instead, she tells him, “Maybe our best move here is to stay quiet,” finally giving him all of her support.

A blindfolded Lydia Rodarte-Quayle is being driven out into a junkyard to meet with her distributers. After a few accusations on the poor-quality of meth delivered, they give in and show her the underground lair. One of the men backs up a truck to reveal a bunker door. After the cook inside confirms it’s safe to enter, she climbs down the ladder to see the situation. Basically, it’s filthy. “Do you seriously think this is up to your predecessor?” she asks. The group is defensive and believes that since Heisenberg is no longer in the game, the quality no longer matters. She doesn’t care about their customers but said that her customers overseas will not accept the knockoff brand. An issue from above calls their attention and they leave her alone in the bunker. Once alone, she checks her watch and then ducks down as if a bomb is about to go off. Gunshots echo inside the bunker. Moments later, a polite voice from above tells her that’s it’s all right to come out. Slowly, she peeks up to see Todd. “I don’t want to see,” she said as she reaches the top of the ladder. He takes her hand and walks her through a crowd of bodies while Uncle Jeff and his crew steal all of the meth products they can find.

Marie convinces Hank to return to work, even though he knows that, “The day I go in with this is the last day of my career.” Despite his lack of proof, he returns to work, now concerned that if the rest of the department confirms Heisenberg’s identity before he does, he could be a suspect. He keeps his mouth shut. While at the office, two other detectives are questioning Jesse Pinkman to try and find out how he ended up with so much money and why he was just throwing it around. When Hank discovers that Pinkman is in an interrogation room, he seizes the opportunity. He convinces the other two officers to take a smoke break. Hank looks at Pinkman through the two-way mirror; Jesse’s eyes glazed over as if he’s in another world. Leaving us on a cliffhanger, the episode ends with Hank opening the door to speak with Jesse.