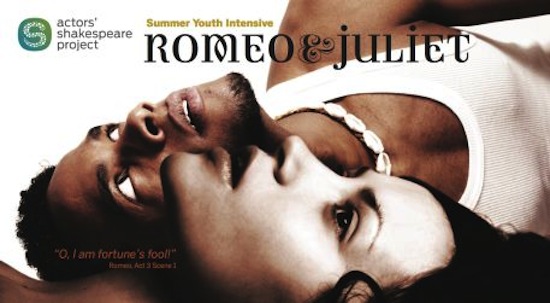 The stars aligned for me last Saturday night. Two of my great loves came together for a beautiful, heart-moving, and compelling performance. Actors’ Shakespeare Project presented its Summer Youth Intensive production, Romeo and Juliet, at the Charlestown Working Theater. I am too sad that I did not write this review before it closed. Too many truly perfect moments to recount in this short review, I would have demanded everyone attend to see the joy of teenagers understanding and performing Shakespeare, especially when many of the characters are around their own ages. You see, teenagers are meant to perform Romeo and Juliet. With a breakneck pace, impulsive decisions, and enough simplicity, joy, and angst that only a teenager could appreciate, Romeo and Juliet falls flat with older cast members. This youthful cast, under the steady helm of director Michael Forden Walker, shines brightly with the perfect pacing and moments to accent some of Shakespeare’s best themes.

While the opening is in an odd limbo where the cast seems dominated by the text instead of fuelled by some purpose, the play quickly picks up speed upon the introduction of our Tybalt, played with wonderful unsteady rage by Xavier Harvey, and solemn Benvolio, played with wry humor by Simon Ivcevic. Their energy and understanding of the text propels the production into a steady groove and tempo, unrelenting for the rest of the show. The introduction of Mercutio sealed the show for me. Jeyrie Rodriguez shows astounding promise as a performer and artist. Her command and use of the language and character surpasses many professionals that I have seen tackle the difficult role of Mercutio. Her Queen Mab speech feels fresh and purposeful, when other actors have made it seem like a mere comedic device. Perhaps even more astonishing is that Rodriguez TRANSFORMS before the audience’s eyes into two other characters, the push-over Lady Capulet and dutiful friend Balthasar. While I found her Balthasar slightly forgettable and her last scene with Romeo under-utilized, her Lady Capulet hit the mark for me. With wonderful chemistry with the Nurse, Juliet, and Lord Capulet, Rodriguez creates a complex Lady Capulet for us to pity and understand.

Rodriguez is not the only actor to transform with great success. Kerrin Houlihan is devastatingly funny as the Nurse, and heartbreakingly sincere as Montague. Her Nurse dazzles in each scene, drawing the appropriate level of humor and personality to keep the performance grounded while allowing Shakespeare’s humor to play for a twenty-first century audience. Verreth Wilson, as Capulet and Sampson, is under-utilized. He commands the stage in his scenes, making him a very successful Capulet, yet his presence is lacking in other scenes and makes me want more of his steady delivery and commanding presence when he is not onstage. Natasha Ayaz has some beautiful and complex moments in Act I. In fact, her best moments are simple and her Juliet is blissfully innocent in her stillness. My only concern and complaint is in late Act III when she resorts to hysterics as her life falls apart. While such a performance would grate if performed by an older actress, Ayaz keeps her performance in such a real and raw place that everything she does seems organic, purposeful, and genuine. While I would have preferred a more nuanced and dimensional performance in the later moments of the play, I commend Ayaz for her efforts and commitment to the play’s hardest moments. Much of the play’s second half falls on Juliet’s performance and the pacing was perfect, thanks in large parts of Ayaz’s lead. The first half, however, hinges on Romeo and his discovery of Juliet. I wanted to love Frank Schuth; he had a boyish charm that I truly appreciated and enjoyed in his Romeo. But something was missing for me. Schuth did an amazing job of letting his fascination, attraction, and affection for Juliet sweep him away, which gave the first acts their momentum. However, I don’t know if I ever felt him struggle enough. Perhaps he got too carried away in the play’s story instead of fighting the inevitable. I think part of the heartbreak in Romeo and Juliet is that the audience knows what is going to happen, but the characters barrel forward towards their fate despite their best intentions. The play features so many “if only” moments that it feels like any one thing could have changed the tragedy into a comedy. I think the strongest moments come when the actors fight against this sense of inevitability, making their failures that much more heartbreaking and real for the audience. A little bit more struggle from Schuth would have sealed his Romeo for me.

The supporting characters turn in solid performances, making the production function like a well-oiled machine without a cog missing or out of sync. This cohesiveness is truly magnificent, especially considering the lack of rehearsal time or pre-existing relationships among these teenagers. Additionally, their ability and willingness to tackle Shakespeare with commitment and integrity made their performance that much more amazing. These young performers have bright futures ahead of them, and I consider myself incredibly lucky to see such talent.

Actors’ Shakespeare Project has one of the most impressive 2013/14 slates in Boston, featuring some of very anticipated works for their 10th season, including another production of Romeo and Juliet, the rarely-performed Henry VIII, the heart-breaking The Cherry Orchard, and the oft-overlooked As You Like It.