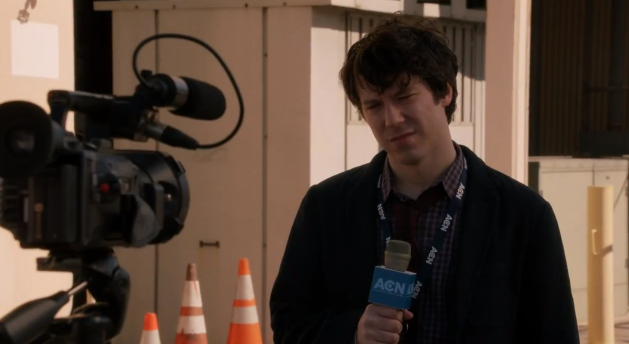 The third episode of The Newsroom‘s second season mostly moved along developing plots: the Genoa tip is gaining in credibility, Maggie is preparing for her (doomed) trip to Africa, Jim is making waves on the Romney press bus, and Neal is pulling for more Occupy coverage. We also revisited Hope Davis’ gossip columnist from last season and found ourselves back on “Mission to Civilize” territory though this time it was more successful (for Will, who managed to convince Nina not to run with the story of his being bumped from the 9/11 anniversary coverage) and less off-putting (for viewers on a “Mission to like Will McAvoy”).

After last week’s heavy but emotionally unfulfilling hour (I’m sorry but I needed to see Don fight for that prisoner throughout season one if I was expected to care beyond general horror at the death penalty’s existence come his execution day in season two), this week’s lighter tone was greatly appreciated. The banter and pop-culture references came back more fully, as did some of the physical comedy that Sorkin loves so much. But what made the return of these devises particularly effective was the unexpected way they were assigned. Last season, most of the banter belonged to Will (a character whose power dynamics with the rest of the cast are too loaded to carry off great banter) and the physical comedy to Maggie (a character whose intelligence was too regularly in question so slipping on banana peels never made anything better). In this episode, Charlie got most of the banter and references, carrying them off with clueless charm and a challenging dryness (somebody’s got to cut Will down and Charlie’s the only character in a position to do it without seeming petty or outmatched). This season Charlie is more coherent, less self righteous and just a lot funnier in general. The writing is Finally calling him on his old-school backwards-ness (thanks for that, Sloan!) and Sam Waterston is delivering the dialogue with a clarity that was missing last year. The physical comedy in this episode went to the unlikely physical comedian, Don. By taking one of the most serious characters in the show and having him play the physical comedy straight, the effect was twice as funny and half as goofy as it would have been had, say, Mack been trying to adjust the wheels of her desk chair and failing miserably.

We’re also seeing Don acquire some stirrings for Sloan (I think Sorkin thinks he’s being subtle about it, which he’s not, but I want my two favourite characters together so I say bring it on) and Sloan continue to beat the drum against drones. Chris Messina got a fantastic scene where he essentially called Will and Charlie out on their unfair grandstanding bullshit (YES!)  while doing the impossible and telling Reese Lansing’s side of the story from a compelling point of view (hooray for the complicated humanization of villains and graying the hardline of morality that almost drowned season one!). There was a little bit of Mack-Will nonsense but it was largely ignorable and there was no Jim-Maggie nonsense to speak of. In fact, he’s too busy working on an actual plotline of his own, a very Newsroom-y critique of campaign trail coverage that’s only really working because Jim is an endlessly compelling character and because his main foil is the winning Streep daughter Grace Gummer (playing a strong-headed reporter who is at once inspired by and two steps ahead of Jim). Gummer’s intriguing Hallie is already a far better match for the brainy-dreamy senior producer than Maggie ever was (she of the epic cowardice and questionable competence) so I’m immediately torn between wanting her for Jim and wanting Sorkin to stay far away from his weakest area- romance. The Romney material feels incredibly irrelevant at this point in history but I’m sure the writing staff that the showrunner is including far more than he did for season one can find the interesting story somewhere in there (and think it might be the most interesting if it’s a complete non-love story).

I was fairly infuriated by the on-air tirade that kicked off the episode (Will, you are a news anchor not a commentator, it is not your place to call heroes and villains!) though its point was a good one (that contradiction was frustrating, I’ll admit). But, in general, this was the sort of episode that points to a better, smarter, more self-aware Newsroom. It brought the funny in ways that work better than last year’s attempts at the funny, it forwarded plots that are serialized to raise the stakes instead of drag out the drama, and it came full circle on some dangling threads to push the characters forward. All the signs are still pointing in the right direction. Now Genoa’s just got to get a little bit more interesting and the season will be rollicking along.