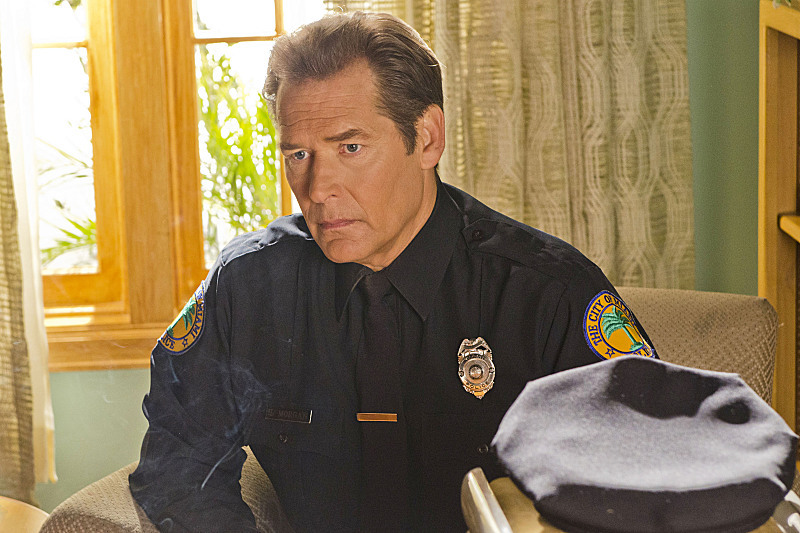 With his directorial debut, Michael C. Hall stepped behind the camera to direct the second episode of the final season, titled “Every Silver Lining.” The episode opened with Dr. Vogel showing Dexter a video of Harry speaking with her in counseling sessions. The VHS quality tape showed the police officer Harry: a version viewers do not often see since James Remar’s character usually plays Dexter’s specific projection of the father of morals.

Worried about Dexter’s curiosity of death, corpses and all things bloody, Harry reached out to the doctor because he knew that she understood things not to be so black and white in terms of psychopathic thoughts. In a therapy session video, Harry held up a piece of glass Dexter had stolen from a crime scene. The transparent piece contained specs of blood that resembled the slides he has collected over the years.

After watching the video, she sent another home with him to prove that she truly helped “create him.” Suffering from mixed emotions, Dexter is perplexed at how to take the doctor and does his best to avoid trusting her. On one hand, she comes off as a mother figure that wishes to finally be a part of her creation’s life (Dexter refers to himself as Frankenstein after her off-putting explanation). On the other hand, this is a person new to his version of life that knows far too much about his past.

Despite Dr. Vogel’s ambiguity, she finally admitted her true reason for visiting Dexter and displayed the small piece of human brain tissue that had been delivered to her doorstep. Asking Dexter’s help to find this killer who is potentially targeting her as a next victim, she revealed that she couldn’t simply go to the police because she has tampered with many psychopaths, possibly creating an army of Dexters.

Meanwhile, Deb met up with her boss to try and explain her absence from work and the murder of Briggs. Covering for Dexter, she kept up her lie about Briggs and admits she may know where the stolen jewelry has been hidden. Pleased at the chance of legally keeping a cut of the stolen loot, Jacob Elway (Sean Patrick Flanery from Boondock Saints) goes with her to find another clue. Called off before completing the mission, Deb eventually finds the jewels in Briggs’ abandoned storage locker, where El Sato (Nick Gomez from Looper) attacked her. Losing the battle, Deb showed her suicidal tendencies one again.

Amidst the personal stories, another crime scene for The Brain Surgeon showed up at a local skate park. A fingerprint revealed the killer to possibly be Lyle Sussman—a local hunter and collector of animal skins. Dexter is on the case and found the body of the man hanging from an animal hook in the killer’s getaway cabin. Perhaps one of the more interesting aspects of the last CSI work is that either the rest of the police department are getting much better at their jobs or Dexter is losing his touch at being two steps ahead.

While El Sapo managed to wrangle the jewels from Deb, he did not manage to make it out of the parking lot to see another day. Taking Dexter away from his own investigation, the homicide department was called in to examine the body of a corpse that turned out to be El Sapo. Finding blood on the broken windshield and a gun in the glove box, Dexter found Deb to be the killer.

Dexter is now covering for Deb and it would appear that this new version of Deb has a taste for blood. While she remains shaky, suicidal, and drug seeking, she is turning into something that resembles Dexter, the person she claims to hate. In one of two scenes where the siblings speak, Deb admitted once more, “I didn’t want to hate you. I wanted the opposite,” hinting at the fact that she is still in love with her non-biological brother.

The relationship between Dr. Vogel and Dexter is allowing Dexter to feel more comfortable in his skin. She praises his psychopathic thoughts and reminds him that he feels more emotion than others in his state—showing compassion for his sister and with the initial death of his father. She and Harry agreed to share pride in Dexter for his ability to clean up the world truly evil people.

This early in the season, it’s still difficult to determine if Dr. Vogel will turn out like John Lithgow’s character as the Trinity Killer—presenting pure evil or overwhelming warmness with each passing episode. Currently, Dexter is falling for the doctor’s words of encouragement as he responds to her beck and call and slowly opens up to her therapeutic nature. If she turns out to represent good, she must work fast to repair the relationship between the Morgan siblings, or else one of them will surely wind up on the wrong side of the interrogation table.