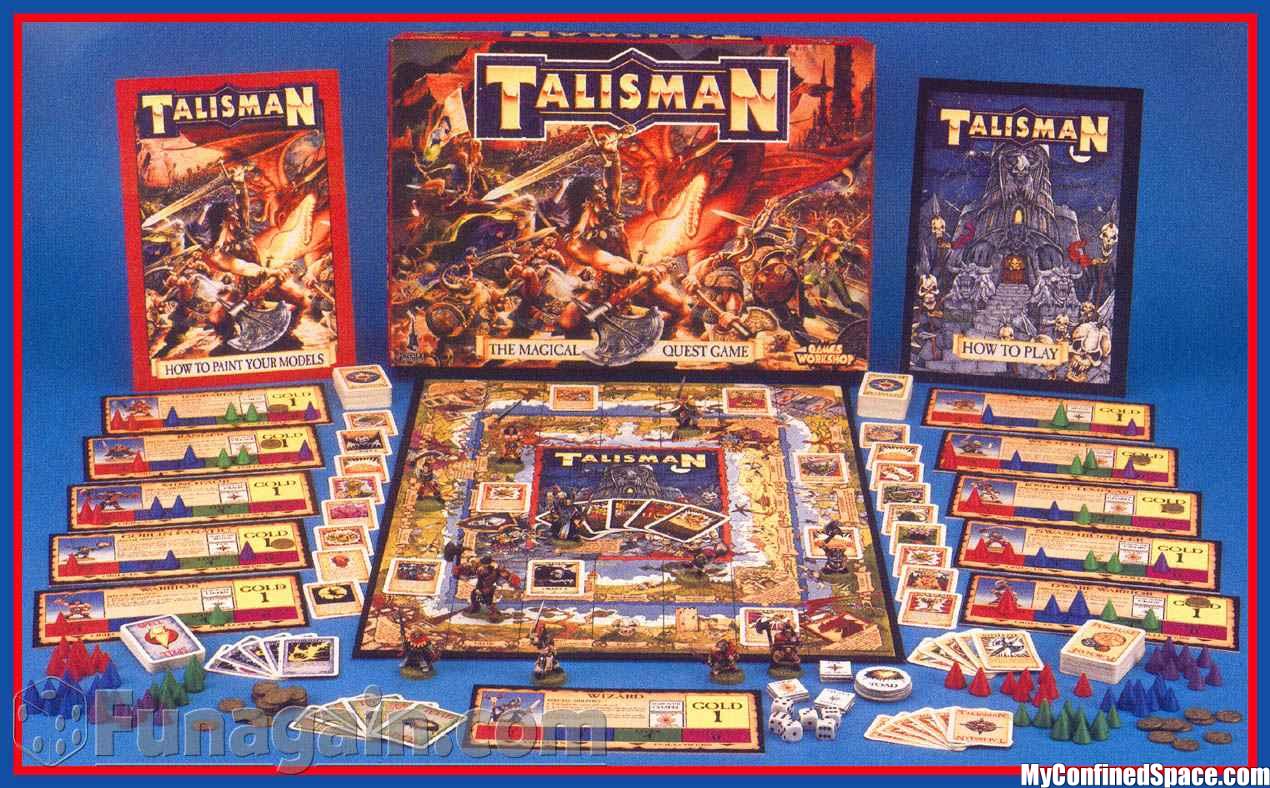 Dear Nine year old Leeman, shut up, put down those Battle Beasts for five minutes and heed my tidings from the future.  No, I’m not here to give you stock tips nor do I possess a dog-eared sports almanac but I do have wonders to share.  You know that board game you inherited from your brothers?  The one where you can play a fireball-flinging minotaur or a space marine with a pet unicorn?  Well, in only two relatively quiet decades, technology will provide you with a version you can play in either your lap or the palm of your hand.  No more hauling the disintegrating box over to friends’ houses, watching in dismay as pieces leak out the side.  No more having to unpack it quietly in the middle of the night and play by the light of the bathroom so Mom and Dad don’t catch you up past your bed time.  Truly, younger self, you will see wonders.

Talisman was a game that permeated my childhood like the smell of overly ripe mangoes.  I can recall watching wide-eyed as my brothers tromped their pieces across the jigsaw-connected board covered with fanciful creations that called to my young imagination as only bad 80s fantasy art can.  Imagine my delight when a handful of years later, the box and all of its coveted contents were handed to me and what followed were countless hours of my younger self trying to con people into playing this bizarre game with varying degrees of success and entertaining myself with solo games as needed to get my fix.

I have consistently tried to explain the game to people as analog World of Warcraft.  You roam around a fantasy world, killing monsters, acquiring loot, levelling up, and occasionally dying.  My brothers’ magnificent set had all the expansions including the mercurial City, the game-breaking Dungeon, and the theme-jarring Timescape where suddenly your Elves and Dwarves were made to rub shoulders with Mad Scientists and honest-to-goodness Games Workshop-licensed Space Marines. As I grew older, I discovered that my vast collection of Legos and then eventually D&D minis made the game come to life as undefeated monsters soon littered the board and added to the visual cacophony.  This was good as I kept losing the actual playing pieces over the years.

While there is an end-game and something of a race for the players to compete at, the game works best as a kind of sandbox where the players  grow ever more ridiculous until parents call their kids home or the sun rises.  My wife is particularly fond of this aimless play as it affords her the opportunity to have her axe-wielding Sorceress hunt down my defenceless Minstrel multiple times in one session.  Quick note: if you play with more than two players, let the Crown of Command be an instant win.  Don’t play out the endgame scenario where one player just sits in the middle sniping at the other players in a depressing game of siege and attrition.  Trust me on this.

The game sat comfortably on my shelf for quite some time and then a few years back, Fantasy Flight, in their wisdom, relaunched a stream-lined, more balanced version which, while certainly more playable, lacked a lot of the 80s-era manic energy of the original.  The 50+ character options were whittled down significantly although they also managed to clean up some of the clunkier rules and also quietly doing away with some of the more racist depictions.  Losing some truly classic art is a shame but having a game that actually approaches a modicum of sense is probably a fair trade.  Probably.

Then everything changed when they created a digital version.  The game which can be repetitive and meandering takes on a powerfully addictive quality when placed on a laptop or tablet as I have only just discovered.  The current iteration, Talisman Prologue, is a single-playered variant that presents the player with challenges to overcome and rewards them for solving them quickly but it is essentially this same game from my childhood.  It’s based on the Fantasy Flight reboot and seems to be acting as something of a preview for a more robust multiplayer game coming out later this year so it doesn’t have all the insane trappings (no space demons, racism, or friendship-ruining betrayals) but it’s still a delightful way to amuse oneself without feeling the need to commit a whole lot of brain or processing power to a more intense gaming experience.  Perfect for just hopping on, playing a few turns, and killing the occasional goblin.

Whether you’re interested in grabbing the cheap little digital game, investing in the Fantasy Flight version, or tracking down the 80s monstrosity, Talisman is a unique experience that is incredibly rewarding with the right amount of irreverence and whimsy.