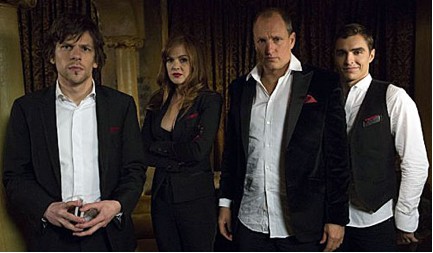 Now You See Me

Now You See Me is probably not a movie that greatly benefits from repeated viewings, but it is one hell of a fun time. Like Ocean’s 11 with a bit of a Shyamalan twist (from before that became an insult), the movie mostly coasts by on a summer blast of cool carried on the shoulders of its ridiculously game cast.

Jesse Eisenberg gives a variation on his standard smart douchebag role, but he seems to be having a lot of fun. Isla Fisher isn’t given nearly enough to do, but she is such a charisma bomb that she makes her part feel more substantial than it is. And holy god in heaven, can we just put Woody Harrelson in every film already? Rounding out the cast with Mark Ruffalo, Morgan Freeman and Michael Caine just seems mean.  I make no mention of Dave Franco, although he’s fine too, because the movie seems happy to let him coast in and out of the story with little to no consequence. He does get a really cool fight scene though.

The movie suffers somewhat from star overload, which makes it hard to choose a protagonist amongst the megawattage. A lot of that is intentional (I have no intention of spoiling the ending, although I will say that I thought it was pretty stupid in retrospect), but it still hurts the film. Basically, Mark Ruffalo ends up being the film’s center, but he’s BY FAR the most boring part of the movie, and his ill-conceived romance with an Interpol agent played by Melanie Laurent* is one of the movie’s weakest points.

But the stuff with the magicians and with Morgan Freeman Versus Michael Caine is pretty fantastic. I’m a sucker for smart characters acting cleverly (see also: every episode of Doctor Who or Sherlock), and I really like magic tricks (illusions, Michael!). I do feel like the use of CGI to create magic onscreen is cheating (especially since filming magic tricks is cheating to begin with – you can’t call it misdirection if it’s literally the only thing we’re allowed to see), but the filmmakers smartly chose to focus more on clever plots and schemes than on actual grand feats.

As I said, I don’t think Now You See Me necessarily holds together too well upon re-watch, but it’s a great Sunday afternoon movie.

*fun fact: until doing research for this review I was convinced Laurent was the woman who played Fleur Delacour. But seriously… she might as well be.