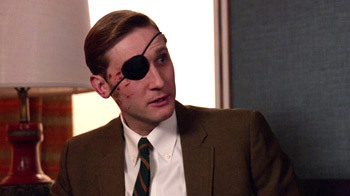 Don Draper is a giant baby. That’s the metaphor that this week’s episode of Mad Men set out to teach us. He shrugs off responsibilities, only thinks of himself, whines when he doesn’t get his way, and ends the episode curled up in the fetal position. His flashbacks earlier in the year to life in the brothel show us just how blurred the lines are in Don’s relationships with woman, with the prostitute who took his virginity became both a nurturer/caregiver and sex object. This trend continues with Peggy who has gone, in Don’s eyes, from subordinate, to protégé/student/child, rival/surrogate sister, caregiver, and now mother figure. If you want to get all Freudian with it, Don is trying to get the love and nurturing from every woman in his life that he didn’t get from his mother. This episode finds Don being the baby, literally, to Peggy and Ted, as they pitch a commercial.

Running in the background is Ted and Peggy’s rarely acted on attraction to one another, plus Ted and Don’s continuing rivalry. It’s clear to everyone in vicinity, included a bemused Joan, that Peggy and the married Ted totally have the hots for each other, and you can just see Don filing away this knowledge for later use. His opportunity arises after Harry calls from Los Angeles and tells him that the rival juice account that the agency had to turn away is now offering a huge amount of money to launch a television campaign. Don has to opportunity to get what he wants, all he has to do to step all over the people around him to do it. At Ted and Peggy’s meeting with the client, Don lets it slide that they’re enthusiasm during the pitch is not a result of their enthusiasm for juice, but because of their mutual attraction. The client leaves unhappy, Ted is aghast, Peggy is furious, and both are humiliated and deny there is anything personal going on between them. Don counters that he was acting in the best interest of the company, but it clear that he can’t even get himself to believe that.

After walking in on Don “comforting Mrs Rosen” last week, young Sally Draper is forced to further deal with this unwanted glimpse into adult sexual life. This episode finds Sally traveling with Betty for an interview at a prestigious boarding school. Sally is excited by the prospect, and given the fact that both her parents are selfish angry narcissists, it might actually be good for her to be away from them. I like the way that Mad Men has dealt with Sally’s transition into adolescence, has it has felt very natural and not preachy. At the boarding school, Sally is taken under the wing of a group of what can only be called mean girls. They are up to no good, kissing boys and the like, and Sally soon gets sucked into their influence. This gives us the return of Glenn aka Creepy Glenn the next door neighbor, who Betty despised to strangely high level. Glenn heads into the next room with one of the mean girls, while Sally is left with another older boy who immediately puts the moves on her. Sally, already damaged by her parent’s sexual hijinks, wants to part of it, and quickly engineers fight between Glenn and the other boy. Later, the mean girl takes note of Sally’s talent for manipulation, a charge Sally is too eager to agree with. On the drive home, Sally bonds with Betty and seemingly rejects her father. With parents has damaged as hers, it’ll be interesting to see if Sally manages to avoid becoming a clone of either them on her way to adult hood.

Oh and Ken totally got shot in the face. Relax it was just buckshot, leaving him with a (permanent?) eye patch. There was about ten minutes where it seemed like he might actually be dead, and it seemed to be Matt Weiners response to numerous fan theories regarding character deaths this season. After the shooting, Ken is furious and gives up the Chevy account, setting the stage for Bob Benson to take over. And speaking of Bob Benson…

This is Pete’s second spotlight of the year, which makes since because Pete faces the same choice in this episode that he did years earlier. This season of Mad Men is all about mirrors, actions and experiences are repeated to show character growth, or in contrast, the futility of change. In the early years of the show, Pete discovered that Don Draper is really Dick Whitman. His Draper persona is a carefully constructed lie made possible by death and confusion during the Korean War. Pete wants Don’s job, and attempts to blackmail him into quitting. Don turns the tables on Pete, and brings him to Cooper himself to say what he has discovered. Pete lays it all out for Cooper, the lies, the fake Draper identity, and gets an infamous line is response: “Who cares?” Draper stays in charge, and Pete has years of pouting ahead of him.

This episode finds Pete featuring the same situation when he uncovers the real identity of Bob Benson. After a season of build up, Bob Benson is… Don Draper basically. Benson is from a poor town in West Virginia who made up his college accreditation and lied his way through his references. He was the manservant to the Vice President of another firm, and has charmed and lied his way into a position at Sterling Cooper & Partners. Bob Benson, just like Don Draper, is a fraud. Pete is now faced with the same choice that he had with Don all those years ago, and he chooses a different option. He confronts Benson, but instead of blackmailing and threatening him, Pete tells Bob that he will keep all the lies a secret, and in return Bob will not interfere with Pete as he attempts to climb the company latter. Despite still being a massive weasel, Pete has actually grown a lot as character, and actually has learned from some of his experiences. He knows that Benson, like Draper, presents a happy exterior, but is likely conniving and ambitious, and likely doesn’t care about anyone other than himself. Pete recognizes that even he won’t stand a chance against somebody as ruthless as the Benson’s and Draper’s of the world who have already removed everything else that stands in their path.