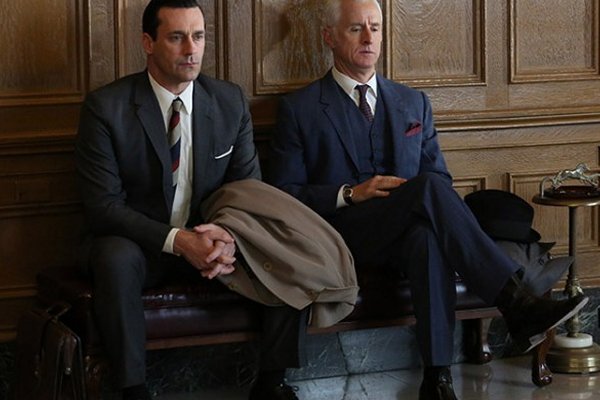 “You’ve given up on me at exactly the wrong time. I have big things coming, you have no idea.”

I never would have guessed that this would be the episode of Mad Men where we see the end of Sterling Cooper Draper Pryce. But with a handshake and surprise press release, the agency is gone, merged with one of their competitors in hopes of landing a deal with Chevy. Watching this episode is like watching a row of dominos fall down one after the other while speeding towards a ledge.

It starts with Pete Campbell being the most gleefully happy we have ever seen him. The agency is about to make a public stock offering, and even at a conservative estimate each partners share would be worth at least a million dollars. This money represents years of hard work to Pete and Joan, the newest and least wealthy partners, and it only takes Don about twelve hours to blow it all up. But not before we get a couple scenes of Pete almost skipping with delight, and brashly confronting Trudy with his future success. If you hate Pete, this will make you cringe.

In the meantime Don, who is unaware of the public offering, must go to a business dinner with the slimy Jaguar dealer who Joan slept with at the behest of the partners last season. Don has already messed with him once this season, and he takes it even further now. Don takes the slightest hint that Jaguar might be thinking of changing their account as an excuse to drop them as client immediately. He insults and embarrasses the salesman, seemingly in some sort of attempt to avenge Joan’s honour. At the office the next, Pete is livid, and we get a gratifying scene of him slipping down the stairs when he confronts Don. Without the Jaguar account, their stock will be worth substantially less, Don’s selfish actions just cost them millions of dollars. Joan is particularly angry, as she feels that the horrible sacrifice she made was for nothing now. If she could put with the salesman, Don surely could have. This was a great scene where Joan confronts Don over his continuously self-centered and egotistical actions. Don is the protagonist of Mad Men, but the longer the show goes on the more you really grasp that he is a pretty terrible person. Don is always looking for an escape hatch, a way to end things. He doesn’t care about those around him because if things get bad enough he can just leave and reinvent himself. Don tells his neighbour later in the episode that people make their own opportunities, but he can’t grasp that the world doesn’t work like that for most people.

Things get even worse when Pete runs into his father-in-law at a brothel. Pete’s father-in-law is also a client of Sterling Cooper Draper Pryce, and fires the agency the next day, because characters on Mad Men never miss a chance to be enormous hypocrites. The agency is crumbling around them, with two of their biggest accounts now gone. It then falls on Roger to save the day, and prove that he is, in fact, still useful. We see Roger throughout the episode carrying on with a flight attendant, who in turn clues him in on important business people coming through the airport. Roger hops on a plane to Detroit with a man from Chevy, and manages to get the agency a chance to bid on their new car.

This is the life raft that Sterling Cooper Draper Pryce needs to survive, but their chances seemed to be dashed when Don runs into Ted, the boss at Peggy’s new agency, on way to the pitch. They realize that Chevy just wants to take the ideas from the smaller companies and give them to the larger agencies. Don pulls on his crazy Draper ideas out of his ass, and suggests that they merge their two companies. The new partnership lands the Chevy deal, and Sterling Cooper Draper Pryce is no more.

Peggy has without a doubt had the most character development of anyone on Mad Men. It’s hard to remember that she spent most of season one as Don’s secretary, since she has evolved so far since then. Now she’s another Don, the head of creative at another agency, doing cutting edge work and playing the advertising game. It was a great move for her character when she left Sterling Cooper Draper Pryce last season and struck out from her own. The look on her face this episode when she walked into the office and saw Don was priceless. Peggy has worked so hard for so long, and came so far, and now she’ll be back in the same office with the same people, working for the same boss. It was a mirror to Joan’s reaction earlier, questioning the point of everything she’s done if she’s only going to wind up at the same place.

There has been a struggle going on inside Penny this season, as she tries to differentiate between the things she wants and the things she thinks she should want. Last episode she failed to buy a swanky apartment on the Upper East Side, and instead move into a comically bad apartment in an “up and coming” neighbourhood on the west side. Peggy told herself that she doesn’t have to live up the expectation to live somewhere fancy; she’s already broken enough stereotypes and sees herself as a trailblazer. It’s same with her relationship with Abe. She’s the primary breadwinner, and supports his freelance and artistic pursuits, it breaks tradition and this comforts Peggy because she’s used to doing that. This episode, however, sees the sexual tension between her and Ted reaches it peak when they kiss in the office. Ted is the high-class man with a stable job and a dashing personality, the type of person other people have probably told Peggy she should be in a relationship with.

To make matter even more complicated, Don Draper has now forced his way back into Peggy’s life. He treated her pretty harshly while she worked for him, even if she did learn a great deal, and it was a tremendous relief when she finally broke free from him. Now that their two agencies are merging, Don actually makes it a point to address the issues with his former protégé. He promises Peggy that he wants to do things right this time, but we’ve seen Don make a lot of promise to a lot of woman that he didn’t keep. It will be interesting to see how much Peggy will still be able to assert herself in the new company, or if she’ll start to chafe under the eye of her old bosses.