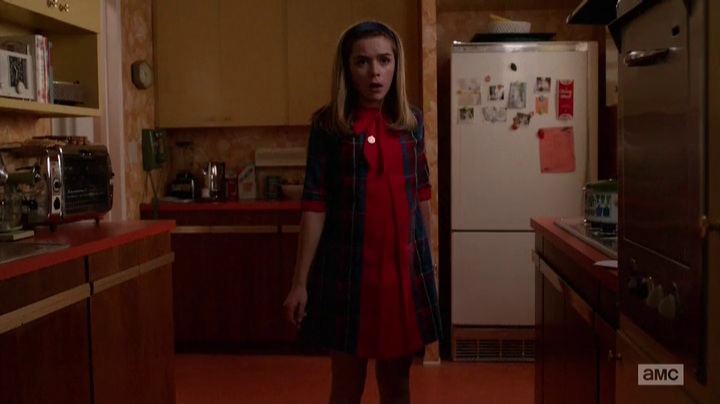 We all knew that this was bound to happen. After at least a decade of infidelity spread across two marriages, Don was finally caught in the act. What made it so impactful and emotional was that it wasn’t Don’s wife that stumbled upon him in bed with another woman, it was his daughter.

This episode of Mad Men dives right into the Vietnam War in a way that the show has avoided in the past. It only makes sense that its presence would grow, as Vietnam started as little seen and rarely spoken about conflict before evolving into a historical catastrophe that shaped an entire generation of people. What brings it to the forefront is the arrival of Mitchell, the son of Arnold and Sylvia Rosen, Don’s neighbours and, in case of Sylvia, his ex-mistress. Mitchell has been drafted into the army, and he and his parents are desperate for a way out. Don finds him speaking to Megan about fleeing to Canada, before he himself takes up the task of getting Mitchell’s call up deferred. Don speaks with clients who have contracts for the Department of Defence, which quickly goes nowhere as they are not willing to do anything to help draft dodging hippies. This setup is interesting because it reveals for the first time that Don is not a supporter of the Vietnam War, and refers to his own service in Korea as “different”.

Don strained conversation with the clients brings the situation to the attention of Ted, who proceeds to lambast Don for breaking all the rules of salesmanship. The rivalry between Don and Ted has played a large part in this season, although it probably exists more in Ted’s head then Don’s, who is too self-centred, egotistical, and selfish to spend a great amount of time thinking about other people. Ted, nevertheless, uses the situation to his advantage will simultaneously doing the right thing, something that also rarely occurs to Don. Ted pulls some strings to get Mitchell a spot in the Air National Guard, meaning that he can still enlist without having to go to Vietnam (just like certain ex-Presidents cough cough). The Rosen’s are of course overjoyed at the news, and it seems to briefly rekindle the relationship between Don and Sylvia. The effect that Don has on women is amazing. Here we have Sylvia describing how great their affair was and how good he treated her, while we in the audience know that it was exactly the opposite.

Shortly after, Sally walks in on her father “comforting Mrs. Rosen”, as he put when trying to explain his actions later. Sally is horrified and flees before Don can catch up with her, leaving Sylvia to beat the bed in anger. Don spends the rest of the day at a bar getting absolutely trashed before returning home to find Sally having dinner with Megan. She is uncomfortable but quiet. When Megan finds out about Mitchell and gushes over how great Don is, Sally loses it and screams at him in justifiable disgust. Don tries to smooth things over with her, and it appears that she won’t tell Megan what she saw, but Don has now managed to destroy the only healthy, normal female relationship in his life.

Bob Benson is the most mysterious character on Mad Men since Don Draper himself back in season 1. The world of Sterling Cooper & Partners is dense and layered with character drama and backstory, so it’s quite jarring when Bob is seemingly parachuted into the show at the start of Season 6. All the characters know him, he is charming yet unassuming, and he has no history known the audience whatsoever. Fans were quick to suspect that something was amiss with Bob, with many theories suggesting that he was a secret agent, a corporate spy, a potential murder, or Don’s long lost son, to name a few. The writers have given us little to deal with regarding Bob, so most of these ideas are drawn from perceived subtext and symbolism.

Here’s what we do know about Bob Benson. The people at the office know him when the season starts, although he apparently works on a different floor, Roger thinks he’s either a genius or a killer, that is until he forgets who Bob is a few episodes later, he befriends Joan before embarking on a romantic relationship with her, in a rare case of the nice guy getting the girl, and he seems eager to help out everyone at Sterling Cooper, given the way he sets up a nurse for Pete’s mother. Before this week’s episode this was everything we knew about Bob.

The layers finally got peeled back this episode, after Pete’s mother claims to be in a sexual relationship with her male nurse. The validity of this claim is sketchy, given that fact that her dementia is advancing to the point where she thinks that Peggy is Trudy, her daughter-in-law. Pete believes that his mother is telling the truth and immediately goes about firing the nurse, and calling Bob into his office to confront him. Bob seems skeptical of the relationship, and suggests that the nurse’s is actually gay, causing Pete to immediately call him a degenerate. The camera lingers on Bob’s face, as he displays a look of distress and sadness, and drops his cheery exterior for the first time. Bob tells Pete that if love is real, it can’t really be wrong, and in the big moment of the show, rub his leg against Pete’s. It only last a minute before Pete pulls away, and Bob’s puppy dog eyes reflect a hidden sadness again. So Bob Benson is gay. OR IS HE?! More fan theories sprung up almost immediately, arguing that this reveal was too simple and was ground that the show had already covered before. With only two episodes left this season, hopefully we’ll know Bob Benson true role on Mad Men before the season is done.