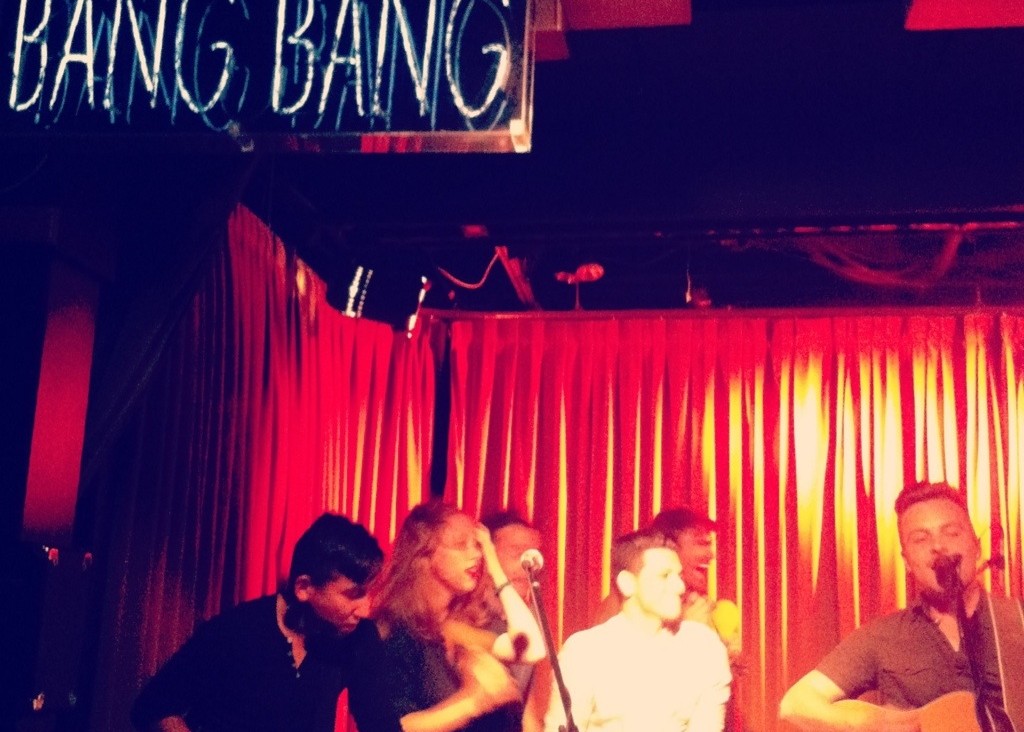 After failing to talk my way into the Drake Underground, I reluctantly bought a ticket from a young enterpriser for 100% markup—and couldn’t be happier that I did. The rafters rang last Monday as yours truly bore witness to the liberation of folk music from itself.

Opening the bill is Twin Forks, Chris Carrabba’s new project. Carrabba, whose previous ensemble Dashboard Confessional is a household name to many, is clean-cut in a linen button-down that obscures his many tattoos. Warm and affable, he begins the set by beckoning the wary crowd closer. “It’ll be homey! Like, uh, we’re homies!” he says, and smiles slowly break like dawn across the audience, replaced by wide grins following the first upbeat tune. “See, it’s fun to have fun,” says Chris, wryly jibing the endemic North American fear of appearing to enjoy oneself. “I know you guys like to keep it cool up here.”

All pretences to cool are soon abandoned after Twin Forks’s most memorable tune: ‘And She Was’, an inspired Talking Heads cover. They muster a surprisingly big sound for their lineup (acoustic guitar, mandolin, bass, drums) and Ben Homola plays with an intensity that actively seeks to dismantle his kit, cymbals crashing to the ground with impunity. Mandolinist Susie Zeldin is sublime on backup vocals and provides all the country street-cred in the world with a wide, earnest smile and a blue sundress.

Later, Chris introduces ’Sweepin’ Up the Pieces’ as “…a song about, um, sweeping up the pieces.” A floor-stomping two-step that seems scarce begun before it’s over, this tune carries echoes of The Low Anthem’s ‘Home I’ll Never Be,’ which, in turn, draws on the likes of Tom Waits and Jack Kerouac for its driving passion and longing subject matter. “You could’ve had a better man,” howls Chris over the chiming refrain, “but I’m the one you chose.”

The Lone Bellow is, for me, the night’s main event, and as they take the stage I am appropriately giddy. As it turns out, my enthusiasm isn’t misplaced and is soon taken up by an audience bowled over by the talents of these newcomers they hadn’t expected to hear. The Brooklyn quintet possesses a mature, confident sound of smoldering lows and dazzling highs—by their second tune, their most famous (‘You Never Need Nobody’), the crowd is eating out of their hands.

Bigger songs, like album opener ‘Green Eyes of a Heart of Gold,’ are complimented by the dogged rhythms of drummer Brian Griffin while softer outings lend themselves to the subtle inflections of guitarist Zach Williams. The Lone Bellow’s lead singer and principal songwriter, Zach shares a palpable chemistry with his bandmates and always returns to their three- and four-part harmonies for his choruses. Multi-instrumentalist Jason Pipkin (usually on banjo and mandolin, tonight on upright bass) plays the whole set wreathed in a quiet smile, the picture serenity as he sways.

After running through most of their self-titled debut, The Lone Bellow graces us with a heart-rending rendition of John Prine’s classic, ‘Angel From Montgomery’. Pure joy written on their faces. Zach in particular is giving every fibre of his being to the performance, dripping in sweat and reeling dizzily between tunes.

There is quiet rapture in their silences and thunderous applause as their final reverberations die.

When I speak to the band after the show, they are exhausted but happy to have given every ounce of themselves to the adoring crowd. Amicable grins split their faces as they talk about their craft. I tell them that they seem too happy for the music they make, that country tends to be the home of broken hearts and homes. Zach shakes his head ruefully. “Music like this is a safe haven for thick topics: betrayal, tragedy. You’ll go crazy if the melody matches the topic!”

Indeed, The Lone Bellow’s genesis derives in part from tragedy. Following a horseback riding accident that left his wife a paraplegic, Zach was encouraged by friends and family to commit his powerful feelings to song and the rest is history. I ask him about the specific moment when his writing found a home in musical catharsis. “Around the same time I realized I could play guitar and sing at the same time,” he laconically drawls. As he found an outlet for his emotions, the rest fell into place: his wife has since miraculously recovered, which may account for some of the heroic optimism of The Lone Bellow’s self-titled debut, contrasting with its lurid introspection.

Zach’s fellow Georgian (and guitarist) Brian Elmquist recalls his own musical history as less rooted in the therapeutic and more in its antithesis: “My mother threw me up in front of a church as soon as I could play,” he laughs. “Well, I think I could play, maybe … one chord.” This origin came to the fore earlier, in their set, when Brian took the lead. Rapturous three-part harmonies and the soft wooden textures of Southern spirituals fill the Underground on his tune, thrumming from that place between lungs, heart and soul that all fine music shares. You could see the younger boy singing to the rafters in front of a rapt congregation. You could almost feel sun through stained glass.

Headliners Ivan & Alyosha never come close to achieving the same enthusiastic response from the crowd in their nevertheless extremely competent set. “These boys can all sing like motherf*ckers,” enthuses Twin Forks bassist John Clark as he leans on the bar. One of their tunes bears distinct resemblance to a progression made famous by Tom Petty and the Heartbreakers, and I tell him as much. He laughs. “We’re all chasing Petty, man!” A high-point of the headlining set is their homage to 1975’s Rolling Thunder Revue, and all three bands gather onstage for a triumphant rendition of ‘Be a Man’.

The Lone Bellow, however, are the heroes of the evening and a large number of the audience are now clutching signed vinyl, posters and t-shirts. Mandolinist Kanene Pipkin tells me that, for them, this is the true polestar of their work. That there is no such thing as a typical audience thus far, because they’re only getting started. “Not knowing what to expect is a good thing,” she beams, “we love to win people over and be part of that emotion.”