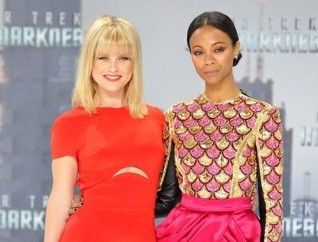 So What The Hell Is Up With Women in Star Trek?

I’m sorry to do this guys. I really tried not to care. After the first installment saw exactly one major female character, and she was constantly clad in a miniskirt, I really did try. I loved the movie so much. It was moving and beautiful and geeky and cool and fun. But it bummed me out that the movie, and the universe that surrounded it, had no place for women outside of as ornaments for its male characters.

I’ve gotten into long fights with my brother about this, fights that seem to make him incredibly defensive. I’m not saying Star Trek (or Star Trek: Into Darkness, for that matter) is a bad movie. Far from it. I love it. I watched my DVD until it burned out, which is physically impossible with DVDs. And I’m sure I’ll do the same with Into Darkness. But this shit is getting ridiculous.

The world of Star Trek is vast, filled with new characters every movie. And the TV show was my first real brush with feminism. No not in the 60s version – I’ll admit the cinematic representation fits well with William Shatner’s swagger. But that was the 60s. Just like I don’t mind that the visual effects no longer amount to “shaky cam = disaster,” I’d be okay with a more progressive look at gender politics. You gave me Captain Janeway, Kira Naris; hell, Seven of Nine was a lot more than Jeri Ryan looking hot in her jumpsuit. How is it that the movie manages to reduce EVERY. SINGLE. FEMALE character to nothing more than how she looks in her underwear?

I’m not imagining this. The sole major female character who isn’t Uhura is blatantly shown in her underwear for absolutely no narrative reason. She doesn’t even have a relationship with Kirk. There’s just a random flash to Alice Eve standing there nearly-naked as though to remind us that she is hot. On top of that, she is remarkably under developed, poorly portrayed, and inexplicably has a British accent despite the fact that her dad is American.

It’s always been a part of Kirk’s charm that he’s kind of a slut. I don’t need the movie to play this down. But when you combine that with a complete lack of individuality for its female characters, it starts to look downright troublesome. Uhura, who I actually really liked in the first one, is played by Zoe Saldana, who’s a kick ass movie star and seems like a smart enough lady. But her role in the movie is perpetually tied to Spock, and far too often is designed to be an “angry girlfriend.” Worse, they lack the sparkling chemistry that made their romance so palpable in the first one.

Honestly, though, Uhura wouldn’t be a problem at all if there was just a variety of speaking female roles. I found myself thinking a lot about the Bedchel test, the test that measures whether or not a movie has two named females who speak to each other about something other than a man. Many, many people misunderstand this test as a measure of a movie’s quality – it isn’t. Lots of shitty movies pass this test, and lots of great ones don’t. But as a female fan of Star Trek, it pisses me off that the representation of women in this future society has been so completely marginalized. It’s unnecessary, distracting, and detracts from the overall integrity of the movie.

So there’s my piece, internet.  I still loved Star Trek: Into Darkness. Its lack of feminist cred doesn’t invalidate the coolness of the story, the greatness of Benedict Cumberbatch or the real pathos behind Kirk and Spock. But it does bum me out a lot.

SIDE NOTE: Want to get a real sense of just how sexualized Alice Eve is in this movie? Just google the words “Star Trek Into Darkness”.