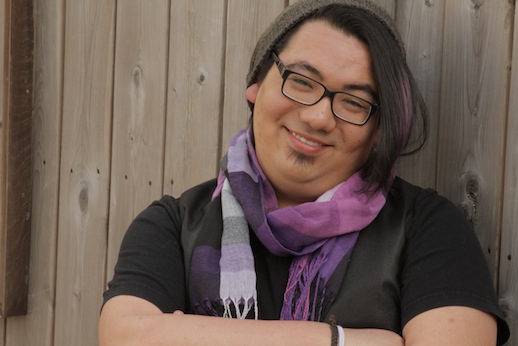 A prolific and exuberant performer, music director and composer, Chris Tsujiuchi’s bi-annual “Chris-terical Cabaret” series brings down the house at Buddies in Bad Times every June and December.

Vivacious, heartfelt, and obscenely busy, Chris found the time to answer some questions about his My Theatre Award-nominated celebration of all things yuletide-  A Very Chris-terical Christmas Cabaret.

Can you remember your first experience with theatre?
I was the Cowardly Lion in The Wizard of Oz at John English Junior Middle School in Etobicoke. I was in the 6th grade, my voice started to drop during rehearsals.

What performers have always inspired you? Are they the same today?
I love India.Arie for her songwriting, Kurt Elling for his versatility, Beyonce for her fierceness, Jessie J for her ridiculous riffing and, most importantly, Kermit the Frog for his generosity of spirit.

How old were you when you first started singing?
Apart from music class, that 6th grade production of The Wizard of Oz was the first time I had sung, so ten or eleven years old.

How did your experience at Sheridan College influence you as a performer?
Besides just learning about singing, dancing and acting I learned some very important lessons about what it means to be myself. I also met some incredible people at Sheridan, like Sharron Matthews, who I’ve been accompanying and touring around the world with for over two years now.

What inspired you to get started as a cabaret performer?
The need to step out from behind the piano and take the stage, the need to showcase others who I think are amazing and talented, and the need to create something that is different and totally my own.

What makes a Chris-terical cabaret stand out?
I think the musical arrangements stand out. I get a lot of positive feedback on the mash-ups/medleys/covers I put together.

Tell us about your frequent collaborators and band members.
OK:

Stacey Maroske – the amazing vocalist and dancer with whom I do most of my “riffing” in tight harmony.

Vaughn Harris – the most supportive and handsome Billy Joe “sound-alike” a gay could ever ask for.

Hilary Wilson – one of the funniest and most talented people I know.

Jamie Bird and Da-Rell Clifton – they keep the steady (and sometimes dirty) beat.

Donavon LeNabat, Doug Price, Michael Mulrooney, Mike Ross and Peter Kadar have all graced the keyboard at a cabaret or two. They’re all unreal.

Matt Marcoccia – the guitarist who has played almost every show I’ve done at Buddies and the Flying Beaver. I couldn’t have asked for a more amazing collaborator and friend.

Honorable mentions also go to Alex Samaras, Brian Leonard, Colin Asuncion, Gaby Grice, Jeni Walls, Joel Gomez, Kevin Tinianov, Melissa Azore, Wade Muir and many others, all of whom have made appearances in my cabarets.

How do you choose what songs to feature?
My 2 basic rules are:
– if I don’t love this song, I’m not going to sing it and
– the story is more important; if a song doesn’t quite support the story, I’ll either change the lyric or find a new song that does.

How do you approach arranging an iconic song into something new?
I arrange based on the story I’m telling with that/those song(s), just like in a musical.

At the annual Christmas Cabaret you play “secret santa”, a game where audience members pull a Christmas carol and a musical style out of separate hats and you have to improvise the result. How does one prepare for something like that? Do you practice hypotheticals?
[Laughs]. There is no preparing for something like that, and no, we don’t practice hypotheticals. That’s why I only do that game at one show a year. It terrifies me.

What’s the craziest combination that ever got pulled out of the hat?
“The First Noel” as a Bollywood number.

You’ve expanded now from the bi-annual Chris-terical shows to a monthly performance a the Flying Beaver Pubaret. How do you come up with enough material to fill so many shows? How often do you repeat yourself?
Material isn’t hard to come by; enough songs exist that I love to create 500 more cabarets. The hard part is finding the time to write down the stories, and then to chart out each number for the band. To that end, there are usually a couple of songs/mash-ups/medleys I’ve sung before, but for the most part at the pubaret, it’s new from month to month.

Do you have an all-time favourite moment from one of your cabarets?
Getting a standing ovation both in the middle of, and at the end of my rendition of Britney Spears’ “Hit Me Baby One More Time” the first time I performed it at Buddies in Bad Times Theatre in August of 2010.

In addition to headlining your own series of cabarets, you work and tour with Sharon Matthews on hers. What’s that been like?
It’s been completely crazy and hectic and and exhausting and amazing. We’ve been to Scotland (twice), London (twice), Saskatchewan, BC, NYC, and South Africa. I’m really lucky to get to work with Sharron so often.

If you could tour your own show anywhere in the world, where would you take it? What would be the theme or content?
At the moment, I would tour a version of A Very Chris-terical 90’s Cabaret because I think there’s a huge market for it, and my first destination would be Brisbane (mostly because one of my closest friends just moved there and I miss him a great deal.)

You’re also an in-demand music director. What’s the best show you’ve ever worked on?
I’ll always have a special place in my heart for Urinetown with the Vic College Drama Society at U of T – it was the very first show I music directed.

You released your first album in December. What sort of songs did you record?
A lot of people who come to my cabarets say things to me after the show, like “If you put together a CD, and you should, then make sure that _______ is on it” and my CD is the result of that.

Where can someone get a copy?
They can e-mail me at chris.tsujiuchi@gmail.com and very soon, they’ll be able to purchase a digital copy on [drum roll] my website!!!

Do you have anything you’d like to add?
If you’ve never been to a cabaret in your life, you’re missing out. I promise it won’t be anything like the Liza Minnelli movie. Take a chance on cabaret, whether it’s mine or someone else’s. I guarantee you’ll be pleasantly surprised.