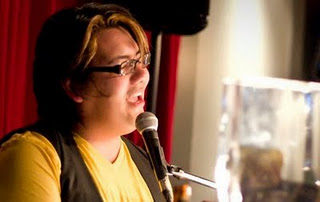 A couple times a year, one of young Toronto’s more engaging performers steps out from behind the piano where he spends most of his time accompanying other acts (like Sharron Matthews) or playing at Statlers Piano Bar (every Tuesday night) and assembles a crazy cast of characters to accompany him to the cabaret stage (usually at Buddies in Bad Times). Now, I go to a lot of theatre, a fair number of concerts, the occasional comedy club- but nothing is ever quite as entertaining as a Christerical Cabaret.

Sheridan grad Chris Tsujiuchi is the man behind the burgeoning series of performances. He’s loud, giggly, chatty and at times heartbreakingly sincere. A seasoned musical director, Tsujiuchi does all his own arrangements, mashups and lyric re-writes. He plays the piano at least once a show and attacks everything from musical theatre to hard rock with his unique tenor and riffing swagger.

At Christmas time, Tsujiuchi trots out the festive sweaters, defiles beloved carols and puts on a hell of a show as his band of merry musicians helps him raise the spirit of the season. Last year’s highlight included the gutsy audience-participation game that paired famous holiday songs and a random musical genre resulting in off-the-cuff renditions of a Sondheim-inspired “Let it Snow”, “Jingle Bells” as a strip tease and, the most fabulous of all, a “Deck the Halls” with all the finely tuned trappings of a well-rehearsed funk number.

The summer brings more Christerical fun as he re-assembles the crew to play on some new theme. For the past two years it’s been the 90s. Featuring audience rap-alongs to terrible songs like “Gangsta Paradise”, re-imagined hits like “Hit Me Baby One More Time” as a coffee house tune then a rock song, Alanis Morisette mashups and giant Spice Girl sing-a-longs, the 90s cabarets have been nostalgic treasure troves. When June’s extravaganza featured my favourite feel-good song by the dorky and somewhat obscure Moffatts mashed up against the beloved Smashmouth anthem “All-Star”, I thought it couldn’t get much better. Then came the loving tribute to the 90s’ most revolutionary theatre piece, Rent; a heartfelt Morisette dedication to a sick friend and a childhood flashback of TV theme songs. The average audience member cried at least once, laughed throughout and sang along far more than they might admit.

As for Chris’ crew, they’re generally a giant ensemble of his most talented friends, including as many as 7 guitarists, a full brass section, drummers, bassists, a quartet of backup singers and multiple guests. Fans of Tsujiuchi have also become fans of his regular collaborators. Like the mind-blowing Stacey Maroske who managed to blast her way through a guitar-less “Give Me One Reason” on sheer musicality then taught herself to play the guitar so she wouldn’t have to do it again. The hilarious Hilary Wilson and her dynamic power-voice/dry-humour combo; adorable Vaughn Harris whose featured solo last Christmas was an oddly engaging “Dick in a Box”; and, my favourite, the ever-endearing James MacDonald and his nice-guy-with-a-guitar charm. Then there’s Mack, the guitarist who jumped in and started jamming in the middle of that fateful “Give Me One Reason” after asking what key it was in, and new addition Joel Gomez whose a capella rendition of “Superman” brought the house down in June. It’s a virtual parade of talented comrades at these things.

Tsujiuchi will be touring the UK this summer with Sharron Matthews’ latest show “Sharron Matthews Superstar: Jesus Thinks I’m Funny!”. They leave at the end of the month after taking the show to Buddies in Bad Times for a farewell stop on July 23rd and 24th at 8pm. Before he leaves, don’t miss Chris Tsujiuchi’s other final performances in Toronto:
Tonight, Thursday July 21st at 7pm- Mickey & Judy at The Best of Fringe Uptown
(Michael Hughes’ heartrending show featuring Tsujiuchi on piano and music directing)
and
Statlers Piano Bar on Tuesday, July 26th
(his farewell performance- featuring many of his best cabaret collaborators, including Matthews)