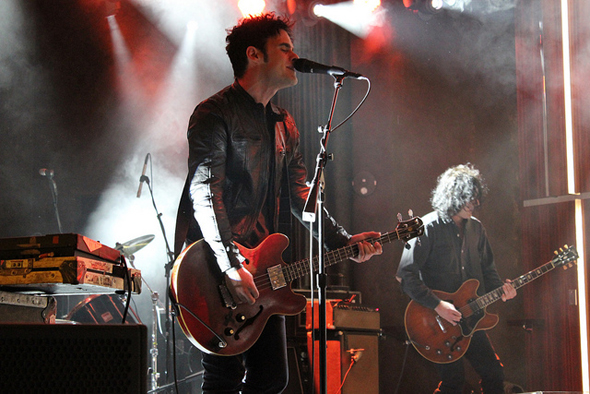 Black Rebel Motorcycle Club are one of those inimitable few acts who persist, year in and year out, relatively unchanged. Since the 2001 release of their debut, B.R.M.C., the band has continually been producing records of the same consistent quality and touring with a widely renown passion and intensity. No, their heady blend of garage rock, blues and psychedelia isn’t going to change the world. But they smoulder away under the radar with a consummate professionalism and a true command of their unique sound. Actions speak louder than words, and these guys have the track record on their side. And they’re pretty loud records at that.

Performing to a venue packed with the least pretentious members of Toronto’s gig-going public I have ever seen, the three-piece band is on fine form. They are touring on the back of their latest release, March’s Specter at the Feast, a record that thrums with their trademark rollicking drumming and fuzzy, thundering bass lines. The bigger tunes from this record, driving single ‘Let the Day Begin’ and sultry belter ‘Hate the Taste’ are dropped early in the set. Much to the detriment of the venue’s sound system, perhaps, these tunes (and others) are washed out to the point of incomprehension. The energy is top-shelf, to be sure, but the sound of band that already drips reverb and oozes saturation becomes a beige mess as it ricochets around the concrete interior.

Fortunately, BRMC is quick to deviate from this model and slips into a familiar territory that owes as much to American gospel as it goes guitarist Peter Hayes’s Brian Jonestown Massacre roots. The band is at its best in this realm—smoky new songs like ‘Lullaby’ make fantastic use of bassist Robert Levon Been’s nasal snarl against a shimmering backdrop. And such richness from a trio! Been plays his bass aggressively, up the neck, forming full chords that free Hayes to wheel in the distorted soundscape of the stratosphere. Leah Shapiro attacks her kit with a lazy confidence, lank hair falling in her face as she ably beats the devil’s tattoo. On that note, ‘Beat the Devil’s Tattoo,’ proves to be an unexpected pleasure and the audience roars Been’s refrain right back at him.

A few more aggressive tracks from Specter are powerful if unremarkable, turning the volume back up but sacrificing clarity for it. I choose to blame the clattering space of the Kool Haus—it is what it is.

Familiar fan-favourite ‘Ain’t No Easy Way,’ from 2003’s blues deviation Howl is another welcome return to form. It’s a hell of a song, a balls-out slide-guitar riff that would bring the Black Keys to their knees folds into a roaring garage sound; harmonicas snarl and boots stomp as the crowd sheds its torpor and goes for gusto. Later, Been takes the stage alone with an acoustic guitar for a heartfelt rendition of ‘Devil’s Waiting,’ taking everything down a notch and earning many a warm smile (and the occasional raised lighter!) before he is rejoined by his bandmates for a rapid-fire gauntlet of old classics. Songs like ‘Spread Your Love,’ ‘Love Burns,’ and ‘Whatever Happened to My Rock and Roll?’ have aged wonderfully, seemingly more relevant now more than a decade since their release.

The slow, triumphant anthem ‘Lose Yourself,’ closes the show and a fair few hands are raised to the heavens. For me, the mark of Black Rebel Motorcycle Club’s maturity lies in the ease with which they slip between the various incarnations of their catalogue. Lesser acts would appear to be pandering with an “unplugged” set, but BRMC’s comes across as solemn without pathos; heartfelt without simpering. Lesser acts would be afraid of alienating the fans of the grittier early sound by closing the show with a soaring, triumphant ballad. But because they feel it, and they believe it, so do we too feel, and believe.