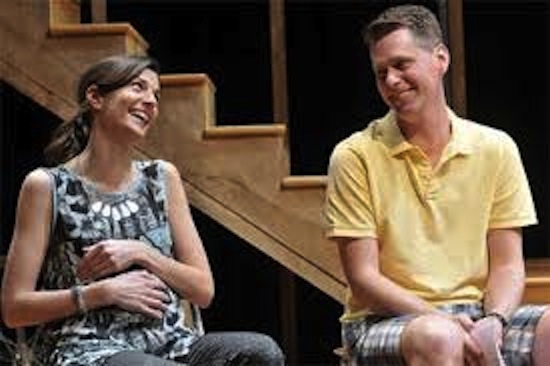 I love the idea of unfinished stories. In theatre, we often walk out of a performance knowing that the characters’ stories carry on (with the exception of Hamlet, where I’m not sure if anything or anyone continues). Luckily for me, I had the pleasure of seeing SpeakEasy Stage Company’s production of Clybourne Park, 2012 Tony Award-winning play by Bruce Norris. SpeakEasy does not disappoint with this treasure of unanswered questions, discussions regarding race and acceptance, and examinations spanning generations. Let me start by encouraging you not to miss this gem.

Norris constructs an expansive play, which continues Lorraine Hansberry’s Raisin in the Sun with Karl Lindner’s story mixed with the stories of Bev and Russ. In fact, one of the key strengths of this play is that Norris is not constrained by Hansberry’s play, but instead creates a world of stories within the open possibilities from the companion play’s stories. This creative playwriting is delightful for any thespian and theatre-goer with knowledge of the original classic play (especially since Raisin in the Sun at the Huntington Theatre in Boston). M. Bevin O’Gara directs a stunning production of Norris’ play, keeping the play moving at a steady pace, especially in Act II. Like the Broadway production, O’Gara casts the play with the same actors for both Acts I and II, despite the acts featuring different characters more than 50 years in the future. Indeed, this decision allows some of the actors to really flex their acting muscles, where they can create diametrically different characters between the two acts.

I was excited to see of my favorite Boston actors (and My Theatre favorites), Paula Plum (of 33 Variations) and Thomas Derrah (of Red). These two actors do not disappoint. In fact, Plum exceeds expectations yet again with a stunning turn in Act I as the broken Bev; Plum’s Bev perseverance and resiliency are heartbreaking. Her hollow laughter is chilling, especially during the exposition, until one revelation after another leads the audience to the daunting conclusion that rocked these characters’ Clybourne Park home. Derrah as Russ sits in quiet introspection, but explodes with passion and vengeance when provoked by the people around him. Together, Plum and Derrah complement each other perfectly as a married couple torn apart by tragedy, desperate to keep the semblance of normalcy in their home. Unfortunately, their home becomes divided as a result of the arrival of other characters.

Marvelyn McFarlane is a delight to watch onstage. She’s vibrant and works perfectly with Plum. Her Francine bustles with energy and hesitation, unclear where she fits into the house’s structure, at once a servant and then a confidante. Her chemistry with Delance Minefee is electric. The character that I was most looking forward to seeing was Michael Kaye’s Karl, the infamous character from A Raisin in the Sun. Kaye is adequate in the role, always delivering some good moments but without the star appeal that makes him memorable.

In general, Act I is sluggish in parts, a product partly of the play’s structure, partly of some missed moments. The second act clicked for me though with some heavy-handedness in the dialogue (most of which was downplayed by this production). Plum is again a gem to watch in this very different role; comedic and sarcastic, purposeful and disciplined, Plum draws the audience’s attention to her story and movements. The two couples are wonderful to watch together, especially in Act II as they dissect many of the play’s major themes, creating conflict in their resiliency and ideology. This organic conflict resonated in strong performances in this Act.

The scenic design by Cristina Todesco is a hollow shell of a home, though representational and functional. Its beauty comes from the missing crevices, shadowing and complementing the play’s action. The rich detail in the wooden structure is commendable. The lighting design by Deb Sullivan, however, fully illuminates as well as accents the scenic design and play’s themes and structure. The transition of time throughout the day and flashbacks are nicely and effectively orchestrated by Sullivan’s strong lighting. In fact, this detail creates many emotional moments, which highlight (and even surpass) the play’s dialogue and actors’ work. Overall, as always, the SpeakEasy Stage Company delivers a solid production from its designers, well-integrated with the director’s focus and play’s themes. While the play offers many profound thoughts and dialogue, I didn’t feel the play deserved the accolades it earned on Broadway. The SpeakEasy’s production is solid and enjoyable, but did not resonate with me for long after the play’s performance.