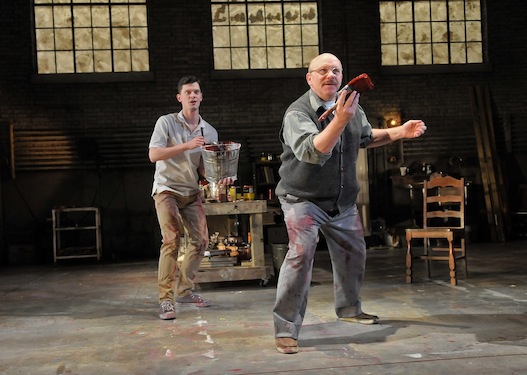 Ever since I had the pleasure of seeing their impressive production of Next Fall last September, I’ve been consistently surprised and excited by SpeakEasy Stage Company’s 2011-2012 season.  Their most recent production of the Tony-winning Red delivers even stronger performances by the small, but intensely talented cast. Not only is the direction and acting strikingly poignant, but the production company strikes a delicate and appreciated balance in its use of lights and sounds to create a truly visceral experience.

First, I loved the theatre and stage. Next Fall was performed in the more intimate black box Roberts Studio Theatre, but Red benefits from the larger proscenium arch stage at the Stanford Calderwood Pavilion in the Boston Center for the Arts. The scenic designer, Cristina Todesco, creates a larger-than-life loft studio for artist Mark Rothko to work on his masterful paintings. The set is truly an extension of Rothko’s grandiose personality, but the attention is in the details- the simple use of a lamp, a record player, an ashtray- with help from Properties Master, James Wilkinson. I rarely notice the details, but here they are used in such a cohesive and purposeful way that I appreciated every moment in this breath-taking set. Todesco has helped create a realistic world for Rothko to comfortably inhabit, despite its expansive dimensions. And boy does he use the space.

Easily the most satisfying and colorful part of this production is Mark Rothko, a twentieth century tortured artist, played with vitality by Thomas Derrah. The actor is really remarkable in this dynamic role. While Alfred Molina may have lost the Tony nod for Best Actor in a Play, Derrah shows the heart of playwright John Logan’s version of Rothko. From the way he flicks a cigarette or a paintbrush, to his rants about the fall of modern art, Derrah lives in a super-human world above the rest of us. I’ve rarely seen an actor inhabit a role so artfully, with precision and nuance. I was captivated, and I had to catch myself before I got swept into Rothko’s twisted interpretation of life and art. Derrah has created a sympathetic character from what is really an unlikeable and insufferable person. Bravo, Mr. Derrah, you humanized and forced me to empathize with a person who, in theory, I should despise for his considerable faults. Yet, Derrah rounds out the edges of these faults with charm and gusto. He rarely pauses to let me question my reactions to his absurd takes on life, and when he’s silent to absorb his own work, his presence is riveting. Derrah is Rothko, and I couldn’t ask for anything else from him.

His young protégée Ken, played by Karl Baker Olson, has the hidden challenge of never being as exposed and raw as Rothko. Logan’s script hides the character in reactions and momentary comments into the mysterious life of this dutiful pupil. Indeed, Olson seems most comfortable trailing on the apron strings of Derrah’s Rothko. I’d almost forgive this interpretation if Olson’s reactions projected from a real and fleshed-out place. I was reminded during intermission that Eddie Redmayne won the Tony for Best Featured Actor in a Play for his own performance as Ken. Olson’s performance never rises to Derrah’s level, almost as if Derrah’s massive performance is out of his realm. Fortunately, Olson has some clever and decisive moments (particularly when Ken and Rothko feverishly list red items, that salvage a character). I think Olson is mostly just miscast in the role; he shows talent and accomplishment, but he lacks intention and motivation. I never saw the Tony-winning performance on Broadway, so I’m curious what Redmayne did with the role to made him Tony-worthy.

Regardless of my concern over Ken’s lack of character, the chemistry between Olson and Derrah is electric. Indeed, they are impressively matched, especially in the ending scenes, though I wanted a bigger build-up from Olson. Their relationship is on solid ground, and purposefully maneuvers as these artists’ egos clash. Indeed, the play can easily be lost in Rothko’s lofty ideals and Ken’s naïveté, yet Derrah cleverly combines the mundane routine of life with the philosophy of a great Artist. I use the word artist in the sense of all of its godlike qualities because Derrah projects his Rothko with almost righteous indignation against Ken’s new ideas on Art. Ultimately, this war between the two men, separated by more than just a generational gap, is what keeps the play moving at a vivacious pace. The ninety-minute performance (without an intermission, I might add) is a breathtaking and suspenseful journey, thanks in large part to the artful direction and staging by David R. Gammons. Even during a scene change, the story continues with moving paintings and music, quite an impressive feat given the quick costume changes and technical duties performed by the actors (such as raising and lowering the many “red” artworks).

I was disappointed only once in the production, and that was that the ending seemed flat. I’m sorry to say that I blame Ken’s lackluster character, but I felt jilted when the lights came on because I felt like there was more to the story. I wanted to know more, a testament to good story-telling. This story is artfully created by the talented production team and the remarkable achievements by Derrah and Olson.

Don’t miss this masterful production of Red at SpeakEasy Stage Company running until February 5, 2012, at the Calderwood Pavilion at the Boston Center for the