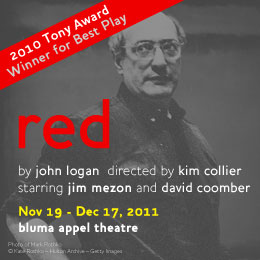 In my University writing classes I always wanted to write inside baseball stories about how Shakespeare people talk about Shakespeare. Every professor I ever had (playwriting, screenwriting, tv writing- all of them) told me I wasn’t allowed. They said the audience would tune the characters out because they didn’t understand, that everything had to be accessible, identifiable, universal. If a character was an expert, well, they had to be explaining their concepts to an audience proxy, for clarity’s sake. But most great plays I’ve ever seen are about smart people talking inside baseball in some form or another. Red, the 2010 Tony winning play by screenwriting big shot John Logan now playing at Canstage, is a one act two hander wherein art people talk about art. If you don’t know your Pollock from your Warhol you have to work a little harder to keep up with the characters and their points of view. But you do keep up, because it’s worth it to try and keep up with one of the most influential artists of the 20th century. Or you could just tune him and his brilliant and daring assistant out and go see Mary Poppins instead. But if you listen, the truth of Red is that it’s actually impossible to truly understand everything Rothko and his assistant have to say, because they don’t even understand everything they believe themselves.

I don’t really have a head for art. I don’t know my Monet from my Manet, let alone my Rothko from a hole in the wall, but the key with Red is to try and understand what the characters are saying through their conversation about art (Pollock, for example, serves as a metaphor for emotional freedom and the dangers of fame, it’s not just about Pollock). To me, abstract expressionist paintings usually look like gradeschool art, the kind that the weird kid in the back of the class always makes, giving up on stick figures in favour of random smudges. But what’s clear as day in Logan’s play is how Rothko and Ken feel about abstract expressionism, about life and death and intellect and emotion and fame and money and all the other stuff- or at least how they think they feel at any given moment. They tell you how they feel about the world when they talk about the paintings. When Rothko and Ken talk about the colour red, they show you who they are. And if you’re listening, you don’t have to know the difference between carnelian and crimson to understand what they’re saying. They’ll contradict themselves, go round in circles, change their minds, but as well as the characters can, the audience can understand the incredibly human way Rothko and Ken explore their own beliefs- incoherently and indirectly.

Jim Mezon and David Coomber play the master and his apprentice with great energy (though I would’ve loved to have seen the original interpretations by Tony winner Eddie Redmayne and the legendary Alfred Molina). The frantic unease in Mezon’s Rothko, his restless anger and dissatisfaction, create a fascinating contrast with Coomber’s fresh-faced but steady-footed Ken. Rothko teaches Ken about life through art and art through life but there’s a sort of discrepancy of groundedness between Mezon and Coomber that makes their relationship more complicated, their power dynamic more malleable and Ken’s eventual outburst more believable. Coomber, hindered a little by repetitive speech patterns within some clunky dialogue, plays Ken with learned patience and surprising humour, as if he, as a commoner, is able to grasp a bit of perspective the great art idol Rothko can’t see. Mezon, is the flip side, a thundering man/child obsessed with thoughtful consideration yet prey to catastrophic mood swings and emotional impulses. He believes in his views, his theories on life and art, his principals, so strongly that he spends more time spouting them than adhering to them. Rothko waxes poetic about the backdoor reasoning and political statements behind his decision to take a large commission for paintings to hang in a restaurant, but he spends so much time posturing that he doesn’t notice his own obvious hypocrisy. It’s a complex and contradictory performance that Mezon delivers with great finesse. As Rothko grapples with the world ceasing to care about his artistic identity (he’s been replaced by pop artists like Warhol, whom he considers worthless), he desperately clings to all the possibilities of who he might actually be.

Director Kim Collier and designer David Boechler’s work with moving walls and projections of colour and popular art is inspired, but I found Alan Brodie’s lighting design a bit too on-the-nose. The colour red is everything in Red– it’s the colour of paint Rothko uses almost exclusively, it symbolizes the blood Ken thinks he sees surrounding Rothko’s collapsed frame, it’s a metaphor for life and vibrancy and darkness and death and anything the contemplative characters can think it to be. It doesn’t need to wash over the entire set at key moments too. At one point Rothko and Ken stand in the studio doing nothing but listing things that are red- it’s the colour of tomatoes, and of dried blood in the carpet after a murder. It’s everything. The characters never reach a conclusion about red, and I think I could watch Red a hundred times and each time reach a different conclusion about them. It’s that uncertainty, the messy and imprecise study of human behaviour, that’s what makes Red worth it; it’s supposed to be hard to understand, because life and art are too.