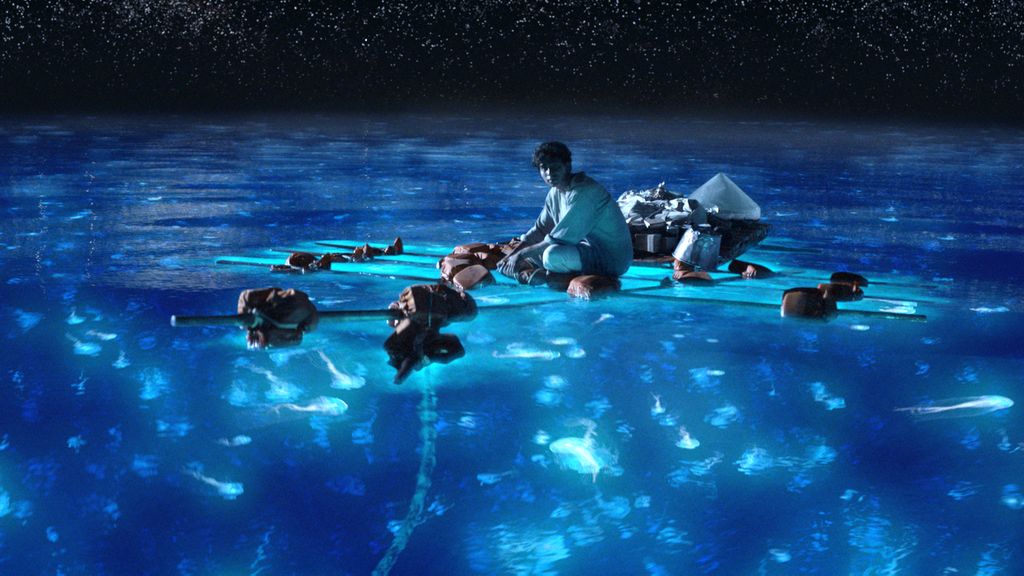 I made a concerted effort to see all of the films nominated for Best Picture before the Oscar ceremony. This effort was made difficult by the Academy in recent years with the addition of five more films and a shortened time frame from announcement to ceremony. Compliments of Rave Cinemas’ discount Tuesdays, however, this effort was more affordable than ever before. After I watched a few movies, I was convinced I hadn’t seen the best picture. I had it in my mind that I was going to see Argo and be swept away by its magnificence. Maybe that could have happened had I not seen Life of Pi first.

I was a little skeptical of a Best Picture nominee in a 3D format. I was familiar with the story, having read the book a few years back. I thought it would make for good cinema, but nothing about it struck me as a three dimensional thrill ride. But Pi’s 3D focuses more on layering scenes with depth rather than throwing objects at the camera for cheap thrills. I suppose this should have been more apparent- Ang Lee is no Michael Bay. My apologizes to Mr. Bay and his fans, but we all know what to expect when we sit down to watch his latest car chase/giant robot/alien invasion picture. Ang Lee on the other hand continues to challenge himself and his audiences by creating films that cross multiple genres. This results in well-constructed, imaginative films that give us new insights into our world.

The narrative establishes a ‘story-teller’ motif in which the adult character of Pi can tell the story of his childhood to a modern day ‘writer’ character. This convention is not altogether new or unusual in narrative storytelling, though in Life of Pi the act of telling a story is such a central theme that this convention is necessary. This starts early with the story of the origin of the name Piscine and how he managed to convince his entire school to call him simply ‘Pi.’ These stories are unique and a bit fantastical, but these are the things we expect when we go to the movies. I want unique and inventive storytelling. Life of Pi delivers this, while simultaneously making us aware of it. Pi tells us that we choose what we wish to believe, particularly when it comes to faith. What Pi chose to believe while stranded at sea for 277 days kept him alive. What we viewers choose to believe largely informs what we take from any movie that we watch.

The imagery that Pi presents is unlike anything seen on film. Pi establishes this with a beautiful series of images overlaid with the opening credits. We are shown a range of unusual creatures that we will eventually come to realize are the principle occupants of the Pondicherry Zoo. Some seem quite alien, a reminder of the vastness of natural life in the world.

The image that made the deepest impression on me occurs when the storm ravages the Japanese freighter transporting the zoo animals and the Patell family. There is a moment when Pi is submerged watching as the massive freighter is swallowed by the ocean. The lights of the ship still glow as it plummets deeper and the shot lingers, the tiny image of a helpless Pi in the foreground as the dying ship falls, taking Pi’s whole life with it to the depths. The weight of that ship in that moment exceeds its standard tonnage as you realize, along with Pi, that nothing will ever be the same again.

I walked out of the theater thinking that I had watched a masterpiece. I’ve never seen a movie I could compare it to. It’s a true original. I didn’t (and still don’t) understand why this originality wasn’t getting more praise. Reviewers praised its visual expertise, but somehow Argo was still gaining all the momentum. I saw Argo four days later and expected something on the level of Pi. It didn’t happen for me. Argo is a fine picture, but it’s just so expected. It uses cinematic techniques that have been used for years. When Siegel and Chambers decide to go to lunch and walk away from the phone, we all know what’s going to happen. It’s going to ring, they won’t be in the office, something will delay their return, and the Argo crew will be in danger of not making their flight. We know this not because we know the true story the film was based on, but because we’ve been watching movies for years and this is something that always happens. It’s a convention that creates suspense, but we’ve seen it.

As the First Lady says, the Oscar goes to Argo. Well deserved. Well done, Mr Affleck. Argo is a crisp, thrilling piece of filmmaking worthy of praise. It just seems too polished and conventional in its storytelling to be singled out as the Best Picture. For an academy that awarded this prize last year to a masterfully original, inventive film, it seems like a step back. Life of Pi, like last year’s The Artist, is a singular film that will be hard to duplicate for years to come.