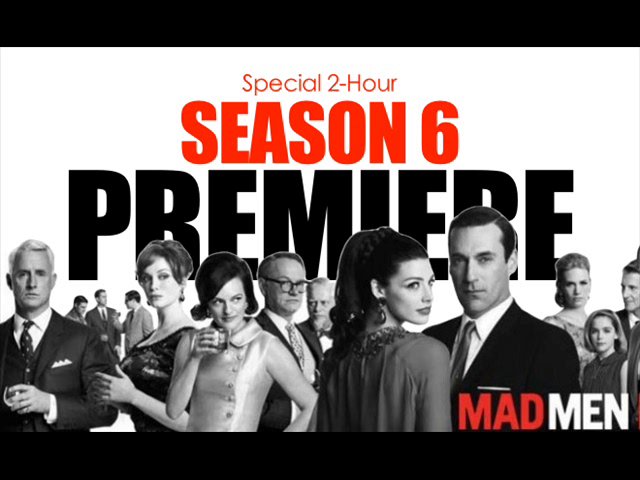 The words of man slowly descending into hell, juxtaposed with images of the beautiful beaches of Hawaii are how we welcomed back to the world of Mad Men. Don Draper is sitting on the beach with his beautiful wife, and has his face buried in Dante’s Inferno. Heavy reading for the sandy shores. It’s strange to see Don in such a bright, happy place, and he seems equally perplexed by his surroundings. He wanders through this shiny world as he desperately wants to blend in to it, but finding himself unable to do so. Don and Megan’s Hawaiian Adventure is short lived, however, and soon they’re back in a wintery New York.

It’s Christmas 1967, about eight months after we last left the gang at Sterling Cooper Draper Pryce, and the world has kept spinning around them, whether they want it to or not. The sudden explosion of facial hair and sideburns are the first thing to tip us off to recent Summer of Love. It’s now clearly “the 60’s”, the stereotypical image we all have in our heads. The world is different, the people are different, even the company is different. The offices that were spotless and clean just a few seasons ago are now strewn with papers and fluorescent accessories. In season one it looked almost sterile, like you could eat off the floor, but not so much in season six.

In the months since we’ve seen them, Peggy has grown accustomed to her new job, Roger is still struggling to find his place among the hippies and beatniks, Betty is still determined to be unhappy, and Pete is still being Pete. The real world catches up to the characters quickly after Don and Megan return with fresh tans. Roger’s mother dies at the age of 91, and at first it seems like his secretary is more broken up about it than he is. But this is Mad Men, where everything is below the surface.

Death, and how the main characters react to the very concept of it, seems to the centre piece of this premiere of episode and is frequent recurring theme on the show itself. One of the first scenes involves a doctor resuscitating the doorman in Don’s building, and near the end of the episode a drunken Don asks the man what he saw before his heart started beating again. Don has clearly been pondering this question for a while, and with an episode that runs for two hours with commercials, the viewers have been wondering for what feels like an equally long time as well. The two hour episodes have never been the strongest part of Mad Men, and at certain points it feels like the screen might burst with ennui. This is a show with infamously slow pacing, and this premiere will do nothing to contradict that image. This was a good episode of Mad Men, and it was able to quickly ease viewers back into this now familiar setting. There are moments when Mad Men can feel like just a bunch of stuff happening with no central plot, but then there’s a scene like the one between Don and the wife of his doctor-neighbour, where the curtain gets pulled back just enough to make you realize that there so much more going on.

Every week I‘m going to take a look at one specific character and their arc within the episode, and since this is the season premiere it only makes sense to start with the shows lead character, Don Draper himself. For most this episode, Don is trying to feel something that’s real. He feels shell shocked in Hawaii and burrows his head in morbid literature. He wants to be sucked in by the white sand and lush jungle, but it just never quite works on him. The difference between real and imaginary are crystallized for Don when he meets a young soldier in the hotel bar. The acknowledgment of his past in the army forces Don to remember that he is really just Dick Whitman, and the Don Draper that everyone else sees is just as imaginary as the appealing scenery around him.

Don is torn between these two themes, real and fake. He responds to the death of Roger’s mother, because he knows that death, however unpleasant, is at least a real experience. His mind is torn and he turns to his trusty bottle of alcohol, which leads to Don vomiting during the memorial service. It’s in this drunken and embarrassed state that Don demands that the previously deceased doorman tell him what he saw. Don wants to know if there is anything to see, or if the end is nothing more than the final real experience.

At the same time, the episode shows us that Don has gone full circle. He’s been having an affair with the wife of his neighbour, but he tells her he wants it to stop. When we first met Don, he was a cheating husband, and to that role he has returned. While some might consider this to be the show repeating itself, it becomes clear that this is part of the cycle of the show. Don is in search of an identity, but he has changed his so many times that none of them feel real anymore. He just slips into one that’s easy and familiar, not necessarily the one he wants to have. The next season is likely to the final one for Mad Men, and an element of the shows eventual conclusion seems to be the idea that Don will never really be satisfied, no matter how much he wants to be.