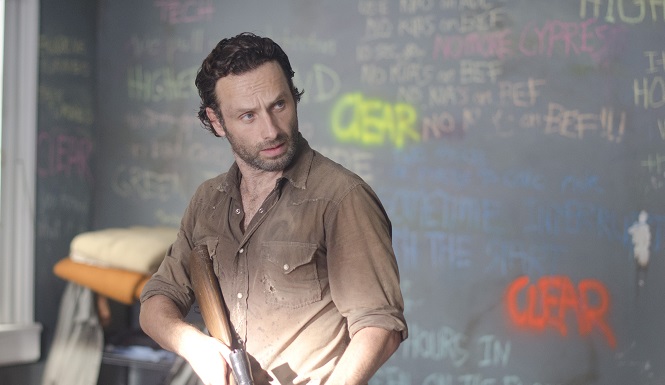 AMC’s lovable band of zombie slayers got a slight reprieve in this week’s episode fittingly named ‘Clear.’ Rick, Carl, and Michonne headed out of the prison for a daytrip to Rick’s hometown to supply up. A showdown with the unhinged Governor looms in the near future and for that they’ll need a few more bullets.  They find that the ammo lockers at the sheriff’s station have been plucked clean and as they wander further they start to see messages spray painted on streets and buildings. That’s when they see that main street has been transformed into a walker obstacle course. A helmeted man hollers at them from a rooftop and the three have to act quickly. After a brief firefight they manage to subdue the masked man and reveal Morgan, Rick’s survival buddy from the first season.

Rick wants to stay with Morgan. Michonne wants to get the guns and go. Carl wants to get something special for baby Judith. Michonne pulls escort duty for Carl when she realizes Rick’s not going anywhere until he talks to Morgan. Morgan had to have been the furthest thing from Rick’s mind at this point. Though they say it’s only been about a year in the narrative, the weight of those twelve months has been enough to fill a lifetime. While sorting through the supplies Rick comes across the radio he gave to Morgan, the same radio he said he would broadcast from every morning. As viewers we’ve only seen this done once, and by his reaction Rick realizes he’s let this man down.

When Morgan awakens he attacks. Rick has to struggle with Morgan to get him to remember. What he remembers is watching his son die at the hands (or zombified maw) or his walker wife. Morgan couldn’t kill this walker version of his wife, despite Rick’s urging, until she had also taken their son. Morgan has spent the last year alone in this town, trying to make it all ‘clear.’ Morgan is in a fixed position, paralyzed by this need to clear the world of the walker infestation.

There are clear parallels between the lives of the two men, and we see Rick start to realize this may have been his fate had he not found his wife and son alive and non-zombified. This is great therapy for a Rick character that was starting to lose his grip on reality. A level-headed Rick is what the group needs when they face off with the Governor. Little did they know when they set out on their resupply mission they’d end up with a clearer headed Rick.

Meanwhile, Michonne and Carl go on their mission to track down a family photo from a local eatery. This reinforces the deep connection Carl has with his baby sister as he desperately seeks some token of life before the walkers. It’s important to him and Michonne seems to respect that. Michonne connecting with other characters is a good thing because she’s been used primarily as a silent, walker death machine. Michonne gets some much needed character enrichment as we learn of her unusual taste in art (rescuing the multi-colored cat sculpture) and her struggle with her own sanity (she had visions of a dead ex-boyfriend).

A developing trust between Carl, Rick, and Michone helps the show move forward. I know horrible things are going to happen when the Governor returns. With the return of Merle, Rick’s trust of Daryl can’t be completely solid and Glen’s hatred seems to be growing into dissent. Rick even admits to Carl that bringing Michonne is a type of test, to see if he can trust her. She seems to pass, or shall we say clear.

Things seem a bit sunny on the drive back, well, aside from the remnants of a hitch-hiker the group completely disregarded on the trip to town. This is what passes for optimism in this Walking Dead world. They’ve loaded the things they’ve come for and strengthened their trust in one another. Rick has had a chance restore a bit of his sanity, or at least gain clarity. This episode ends up feeling a bit like the deep breath before the plunge. Something horrific still looms, that much is clear.