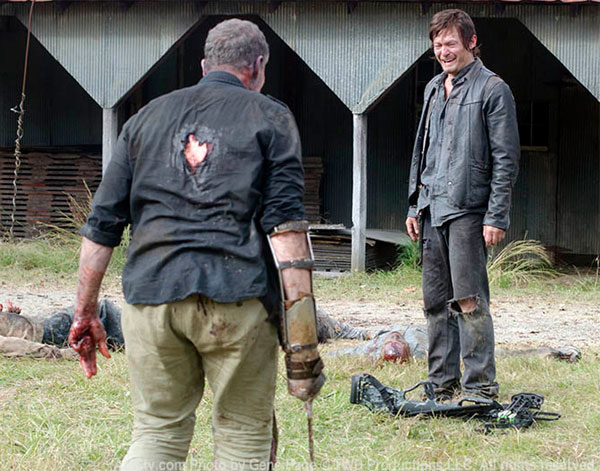 I guess we knew some sort of Merle redemption episode was on its way. I had hoped it would be part of something greater, like Merle’s little redemption story in the finale. Instead it stands as the primary driving force of “This Sorrowful Life.” This episode starts out with letting us know that Rick has decided on the Michonne solution. But Sheriff Rick Grimes can’t do this horrible thing, right? Yes, that is correct, but we still have to see him agonize over a bit through a commercial break.

Merle knows what we know. No one at that prison can deliver Michonne to the Governor except for him. So, by the time Rick is ready to call it off, Merle’s already taken the initiative and has Michonne roped up and on a trip to the Governor’s rendezvous point. Okay, Walking Dead, you’ve lost me. I have absolutely no idea why Michonne follows Merle into a secluded area. By my count Merle has tried to kill her twice. There’s some flimsy dialogue where Merle says, ‘Rick says he wants us to clear this area out…” or something pathetic like that. Are we supposed to believe that the more open and sociable Michonne is also somehow more gullible than ever before? I shouldn’t linger on this issue since Merle eventually lets Michonne free. This fact makes the issue less relevant, but I refuse to let this character miss-step go unnoticed.

Somewhere, over the course of his journey with Michonne, Merle realizes he can’t do it. He can’t deliver this woman to her death. Michonne’s words lead to a realization in Merle. She encourages him to go back to the prison, to have a chance to start over. Merle chooses a different option. Merle figures he’ll have one last go at the Governor and maybe save Rick and company a whole lot of grief. (spoiler alert: the finale will still be loaded with grief) He drinks a bit of whiskey and starts a conga line of walkers right into the Governor’s little ambush. He manages to kill off a few would be ambushers, but the Governor gets him in the end.

I imagine the Governor does something particularly nasty to Merle before he kills him, aside from snatching a few fingers. We don’t actually get too much else, other than a somewhat maniacal face he makes when he fires at Merle. It seems to me the Governor enjoys inflicting pain on those who’ve crossed him. Merle has lied once or twice to the man, so it seems like he’d be in for more than a simple shooting death. The last thing I expected was for Merle to return in zombie form. But, there he is. Right as his little brother, Daryl, shows up looking for him in all the post zombie dance party carnage. This provides one of the better moments of the season, as the typically stone cold Daryl has to face zombified Merle. Clearly he had some brotherly issues to work out has he turns zombie Merle’s face to goop. I just hope this doesn’t lead to hallucinations of Merle in a white dress.

Also in this episode, Glenn decides he likes it, so he’ll put a ring on it. I worry about happy moments like this in the Walking Dead. I’ve formed a theory both from reading the Walking Dead comics and George R.R. Martin’s a Song of Ice and Fire series. Okay, it’s not a theory; it’s just deeply rooted cynicism. In these two currently running narratives any time something good or beneficial is conceived of involving any of the non-morally corrupt characters it is quickly reduced to ash. So, it’s with that nagging thought that I say, “…good for you Glenn and Maggie, I’m sure nothing horribly scarring to characters and viewers alike will happen in the near future.”

Oh, and the Rick-tatorship has ended. Rick gives a very moving speech to the group and lets everyone know that they’re going to vote on big important issues, like the sacrificing of one for the salvation of all, from now on. That sounds like we’re in for lots of debates next season. It’s great to see democracy survive like that. That could all change with the conclusion of the delightfully titled finale “Welcome to the Tombs.” Next season could just be Rick talking to an imaginary person on a disconnected rotary phone while white gowned ghost Lori filibusters. And we’ll keep watching, won’t we?