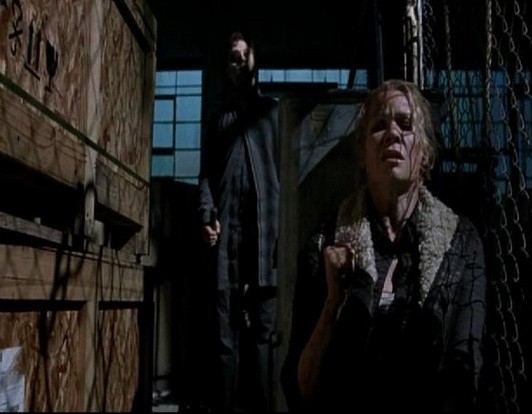 So, were you wondering what happened to Tyreese and his group? Sure, we saw them join up with the Woodbury crew, but they’ve remained unseen for a few episodes. Tonight, they’re back albeit as a subplot to Andrea’s sudden realization that the Governor is a bit off. Where are Rick and crew as they prepare for war (and a possible crucial decision of the fate of Michonne)? Not pictured. All of these elements add up to a meandering episode that ends up feeling a bit like filler.

I wish I could justify my dislike for Andrea. She hasn’t specifically done anything detrimental to the main cast of survivors. All she did was get separated from the main group and get a taste of a simpler, sheltered life. I shouldn’t hate her for settling on a little peace after months in the wilderness battling walkers and her own illness. We, as the audience, saw the things the Governor and realized he was a villain, but Andrea didn’t see those things and chose to stay when Michonne left. To a degree she betrayed her friend who protected her in the wilderness when she was at her weakest. At least that’s the way Michonne saw it. It was easy then for us to side against Andrea because she chose to warm the bed of a psychotic instead of returning to the hell beyond Woodbury’s walls.

In this episode she pledges to kill the Governor, something she thought about after her brief visit to the prison. She once again raises a weapon to a completely unaware target, but this time her hand is stayed by Milton. Milton tells her killing the Governor won’t save her friends, but somehow she translates this as “I should go run by myself to the prison and warn my friends.” I wish she’d pulled the trigger. Sure, she never would have made it out of Woodbury, but it would have been a small sacrifice for the greater good.

Instead, she jumps the wall and runs to the prison. Of course it’s not a direct route and soon the Governor is upon her, chasing her down in his highly tuned American pickup truck. (These scenes reminded me of something out of Speilberg’s Duel or Stephen King’s Maximum Overdrive.) Andrea hides out in an overgrown industrial complex where she faces both the danger of the Governor stalking her and walkers lurking about. There are a few new impalement devices used to gory effectiveness when Andrea needs to put a few walkers out of her way. She eventually reaches a point where walkers block her only escape from the Governor. Faced with the possibility of returning with the Governor (most likely as a captive), she manages to use the walkers to overwhelm him and she is able to escape.

This is one of those narrative moments where the villain is so clearly overwhelmed that there is no need for us to see his inevitable demise…and then he comes back. The Governor manages to catch Andrea moments before she’s able to signal to Rick in the guard tower. Yes, Rick, who is readying his people for war, thinks he sees something, but convinces himself it’s nothing — the only explanation for him not responding to this suspicion being that he’s dismissing it as another Lori hallucination.

So the Governor is able to smuggle Andrea back into Woodbury without anyone really knowing. He tells Milton he couldn’t find her. Okay, he only rolls down the window a crack, so I guess she could be in there somewhere. Milton might even know he’s being lied to, but realizes this isn’t the moment for public defiance. Maybe he wants to keep letting the Governor underestimate him.

The Governor learns of an act of sabotage that happened while he was away and questions Tyreese and his group about it. (Remember when I said they were in the episode?) It’s true, Tyreese and his group had some scenes in this episode. That’s about the extent of it. Their relevance is not immediately apparent to me. They may eventually become valuable assets to Milton’s insurrection. The Governor asks a key question and figures out that they didn’t do it, leaving Milton as a principle suspect.

I said earlier that I thought this was mostly a filler episode. I wouldn’t consider it essential to the narrative of the third season. An interesting point is raised in a conversation between Andrea and Milton. This ‘war’ that Rick says is coming doesn’t have to end with the complete destruction of the other side. This world is about survival, and the survivors of this ‘war’ will be our primary characters for season four. One side will need to assimilate into the new group. Milton wants Woodbury to survive. From a narrative perspective, this seems impossible. Likely both safe havens will be compromised and those lucky few people that remain will need to move on to some new horror in season four. And we’ll all be tuned in to the misery.