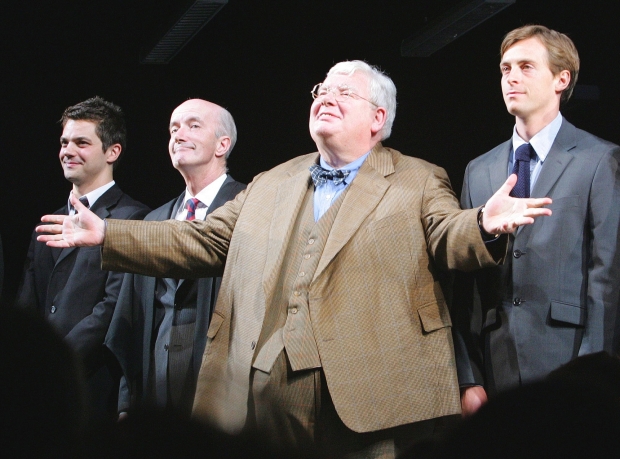 Here’s to you, Hector

It’s strange to write this- a friend and I were literally talking about him just two days ago. We don’t make a habit of announcing every celebrity death on this site, knowing that surely someone else will say what needs to be said, but in this case I feel that I should write it myself– the truly wonderful British actor Richard Griffiths died this morning from complications related to heart surgery at University Hospital in Coventry.

Griffiths was only 65 and one of my favourite British actors. North American audiences will remember him mostly for embodying the muggle uncle Vernon Dursley in Harry Potter, though they might also recognize him as the grotesque King George in the most recent Pirates of the Caribbean, or for his bumbling sweetness in Hugo, where he carried on a tentative courtship with the wonderful Frances de la Tour in the background of many train station scenes (or even for starring opposite Daniel Radcliffe in Equus on Broadway). I particularly loved him on Episodes, playing the erudite actor stripped of his iconic role and replaced by Matt LeBlanc.

But it’s in The History Boys that Griffiths made his most indelible impression on me. Alan Bennett’s play about a group of exceptional British grammar school boys is whip-smart, hyper-literate, fantastically fun, and severely melancholic. One of the greatest ideas anyone’s ever had was to turn that play into a film in an almost word-perfect medium translation, using the same brilliant cast (which also included de la Tour as well as a pre-Mamma Mia/Captain America Dominic Cooper, a pre-Tony James Corden, and other amazing people like Russell Tovey and, my favourite, Jamie Parker). The moment I saw The History Boys, it knocked some long-beloved films off the podium to become one of my absolute favourite things. As Hector, the play’s central life-shaping teacher, Griffiths was superb (receiving Tony, Olivier, Drama Desk and Outer Critics Circle Awards for his performance- a clean sweep). He created this would-be icon of a man whose youthful exuberance and lust for life masked a discontent both fundamental and inconsequential. He was at once beloved, admired, reviled and pitied. It’s hard to imagine anyone finding the balance of Hector with as much humanity as Griffiths did and actors to come will always live in his shadow in that great role.

The artistic world will be left wanting in Griffiths’ absence and the end of The History Boys will always be just a little more heartbreaking.