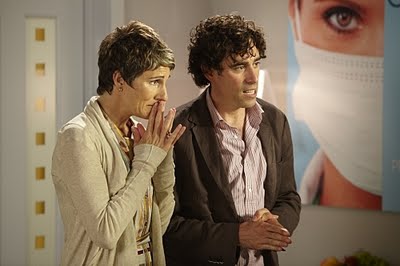 For the Love of “Episodes”

Ladies and Gentlemen, I have a new favourite cable series. Showtime’s Episodes

is a masterpiece ode to/criticism of television, a nostalgia-fueled/thoroughly modern story of culture clash, assimilation, corruption, disappointment and the ways people let each other down. But it’s a comedy. A brilliant comedy- perhaps the funniest and smartest to hit cable in years.

With writers as its principal characters, the task of creating the witticisms of their dialogue is a tremendous one. Luckily for all involved, the writers of Episodes are every bit as good of writers as Sean and Bev are. Thank god. The team of David Crane (a TV comedy god as far as I’m concerned) and Jeffrey Klarik wrote a tour de force 7 episode first season for the show about British TV writers adapting their hit show for US broadcast. As Hollywood insiders who’ve seen their work soar to popularity (Friends) and crash and burn (The Class), Crane and Klarik infused Sean and Bev’s first season arc with all the self-congratulating excitement and self-preservational defenses of any artist with a project balanced on that thin line between success and destruction. Behind the cleverness of the whip-smart dialogue lies the painful human reality of these people who are being pulled further and further away from themselves.

It really is a remarkable series.

From the phenomenal comic timing of Kathleen Rose Perkins and Daisy Haggard as cynically submissive network executives to the joy Mad About You vet John Pankow’s character Merc takes in his own corruption- the supporting cast is every bit as great as the leads. Matt LeBlanc is the PERFECT choice as the lead of the American version of the show-within-the show. Set aside the wonderfully meta implications of Episodes‘ David Crane-ness, Le Blanc is a beloved TV icon whom those on this side of the pond love without really understanding why we do. He’s forever tied to Joey, a character who brings all sorts of wonderful connotations with him (womanizing, stupidity, a successful show, a failure) and at once makes sense as the first person bottom-line-driven network execs would want on their billboards and the last person content-driven artists could tolerate near their work. And he’s so damned charming! The man can say anything and you don’t begrudge anyone for falling for his lines.

But it’s Sean and Bev who really live at the centre of Episodes. Stephen Mangan and Tamsin Greig give brilliant life to the married writers whose lives are turned upside down when they move to LA from London to navigate the horrors of the American TV pilot process. They are phenomenal protagonists and perfect foils for each other; his schleppy optimism, her hard-edged cynicism- you both love and believe them at every turn. Actually, the fact that you can’t love them the whole time, that’s part of the brilliance. They’re stressed (and talented), so they’re also wrong a lot- because that’s how that works. The two possess an electric chemistry that pairs with an ease of relationship to completely sell them as not just a married couple, but one that fits into their awesome backstory. That backstory is actually one of my favourite things about the series. A story that suggests that they may have the potential to betray each other but also establishes them as perfect for each other: apparently they met when Sean was married to another woman and began an affair. It’s complicated, messy and sort of wrong, but in the name of the “woah, where have you been?” moment, where’s the line? Sean and Bev met each other and the world started to make sense. It’s them against the world. So the crux of the series is the ways in which they abandon that, the fact that they fall apart only when they drift apart. It’s brilliant.